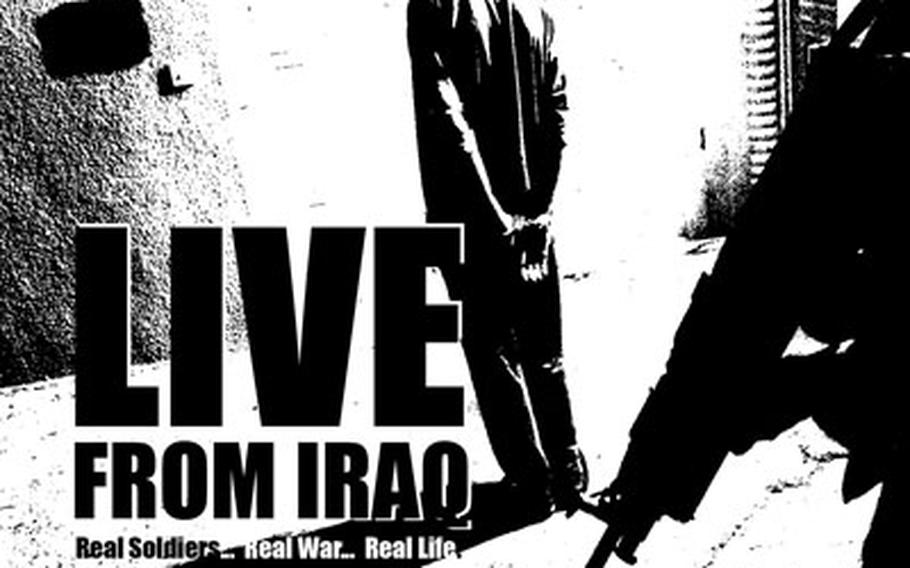 The album “Live from Iraq” was recorded at Camp War Eagle in Baghdad in a soundproof booth made of plywood and old mattresses in the corner of a barracks. (Courtesy of Sgt. Neal Saunders)

The album “Live from Iraq” was recorded at Camp War Eagle in Baghdad in a soundproof booth made of plywood and old mattresses in the corner of a barracks. (Courtesy of Sgt. Neal Saunders) 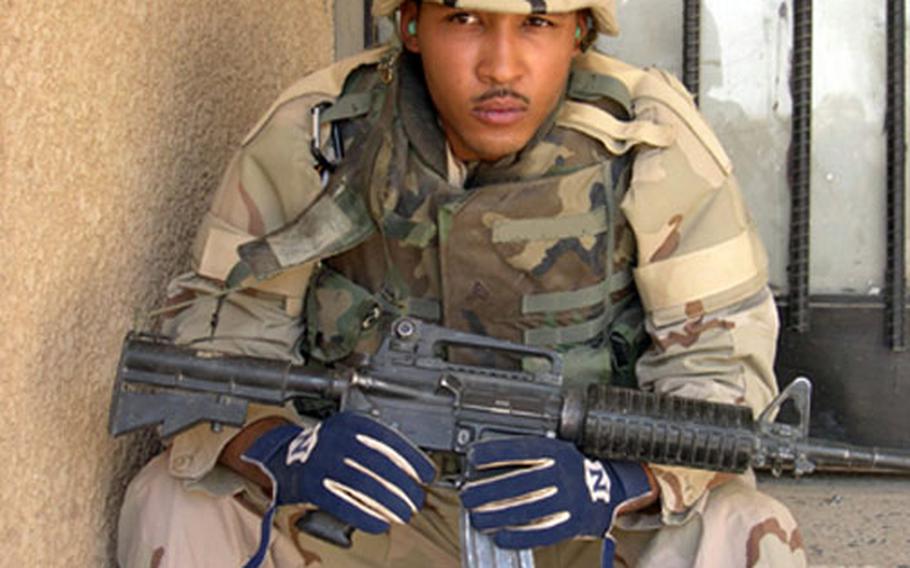 Sgt. Neal Saunders, aka Big Neal, poses in Baghdad. Saunders thought his deployment to Iraq would force him to postpone his music career. Instead, it inspired him. (Courtesy of Sgt. Neal Saunders) 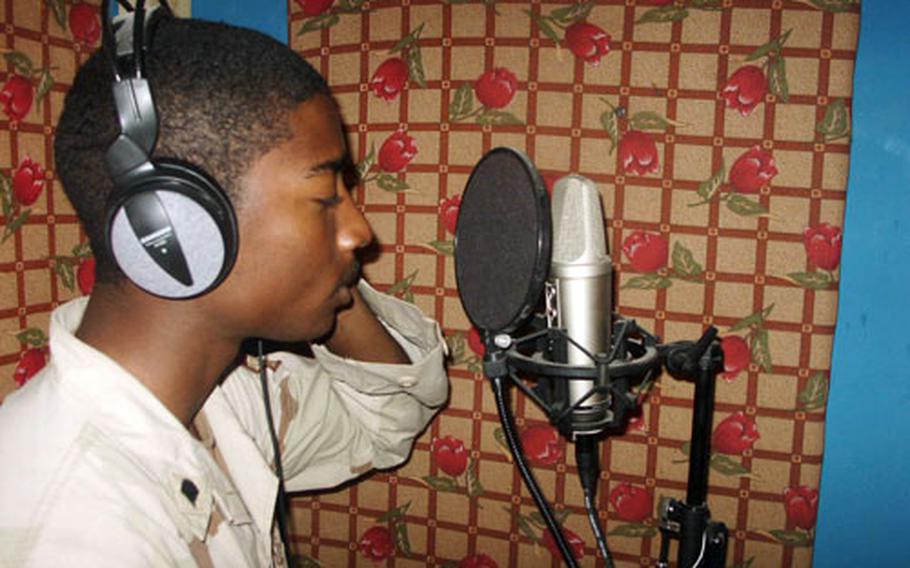 Sgt. Ronin Clay records in a makeshift studio in an Army barracks in Baghdad. Extra mattresses were used to help soundproof the studio, which is outfitted with equipment shipped from the States. (Courtesy of Sgt. Neal Saunders) 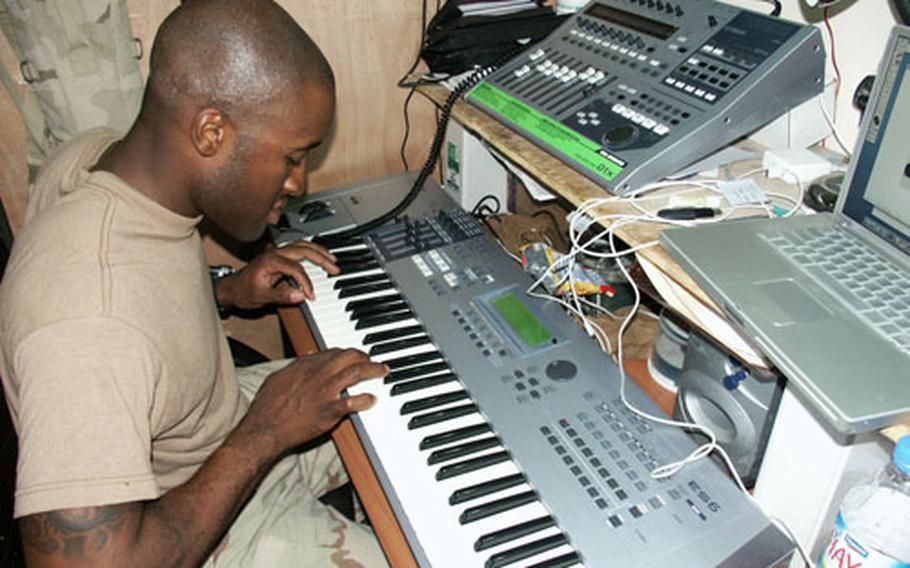 Sgt. Marion Saunders, shown here practicing on a keyboard, was going to be featured on the album before an insurgent attack severely injured his leg. His injury inspired the song, “@uck#m.” (Courtesy of Sgt. Neal Saunders) 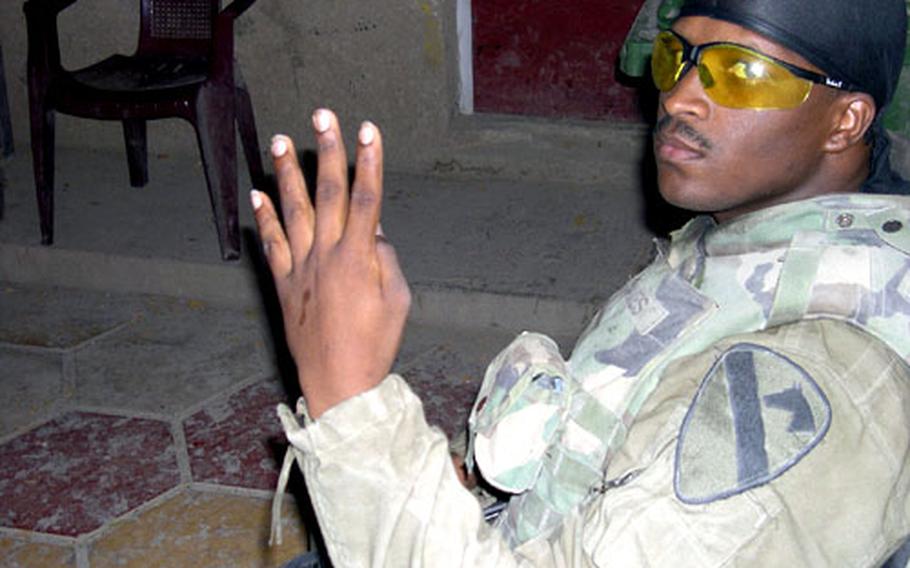 Staff Sgt. Terrance Staves takes a break from working on the album outside his barracks in Baghdad. Staves says reaction to the album, which has sold about 1,000 copies, has been positive. (Courtesy of Sgt. Neal Saunders)

Sgt. Neal Saunders thought being deployed to Iraq would delay work on his music career. Instead, it forced him to start sooner.

So Saunders shipped $35,000 in recording equipment to Camp War Eagle in Baghdad and started rapping.

It was produced entirely overseas by active-duty soldiers, with a soundproof booth made of plywood and old mattresses in the corner of an Army barracks. Saunders put some sound mixers and a keyboard on some leftover furniture, and used a laptop computer as his mobile recording studio.

Raw emotionWhile the production values on the album are sophisticated, the tracks themselves are raw. In &#8220;Integrity,&#8221; Saunders angrily proclaims:

Another track was inspired by a gun battle in April 2004 where eight of their fellow soldiers were killed. Another blasts a cheating girlfriend at home.

Both men said their goal with the album was to define what being a soldier was really about, both the good and the ugly.

&#8220;People need to understand a soldier isn&#8217;t just someone you start loving after September 11,&#8221; Saunders said. &#8220;When you send soldiers, people are going to die. And war is killing enough so that the enemy concedes his point.

Both men recall near-death experiences during their one-year tour in Iraq, which ended in March. Another soldier helping with the album nearly lost his leg in a firefight.

Unexpected fansBoth men said they&#8217;ll be out of the Army by the end of the year, but plan on staying in the Fort Hood area to continue work on promoting the album and their upstart production company, 4th25 Entertainment.

Staves said reaction to the album has been positive so far, especially from servicemembers who have spent time in Iraq. They have sold about 1,000 copies through their Web site, primarily to people in the Fort Hood area. Staves also has received praise from an unexpected fan base: Families of soldiers returning from the war.

The group has aspirations on a second disc. But Saunders said his motivation is less about money than telling the soldiers&#8217; stories.