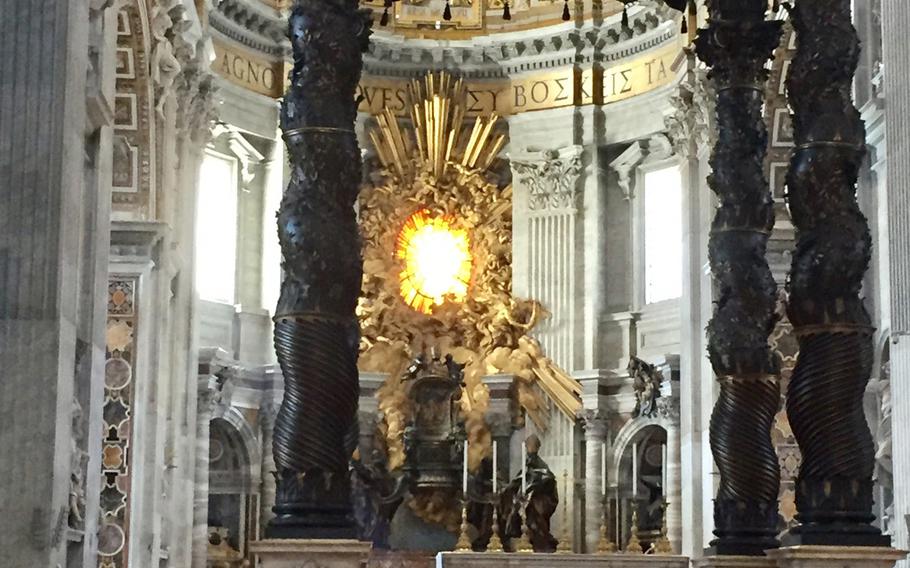 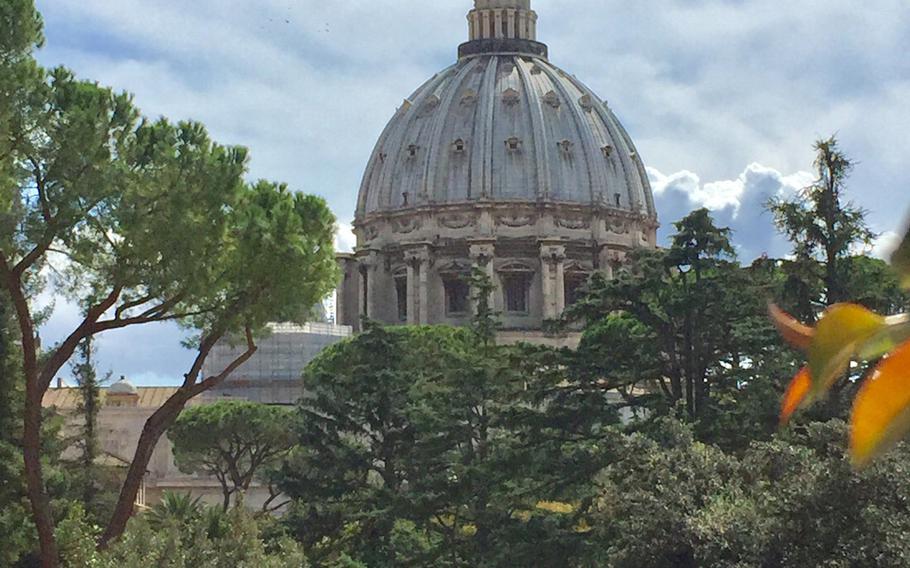 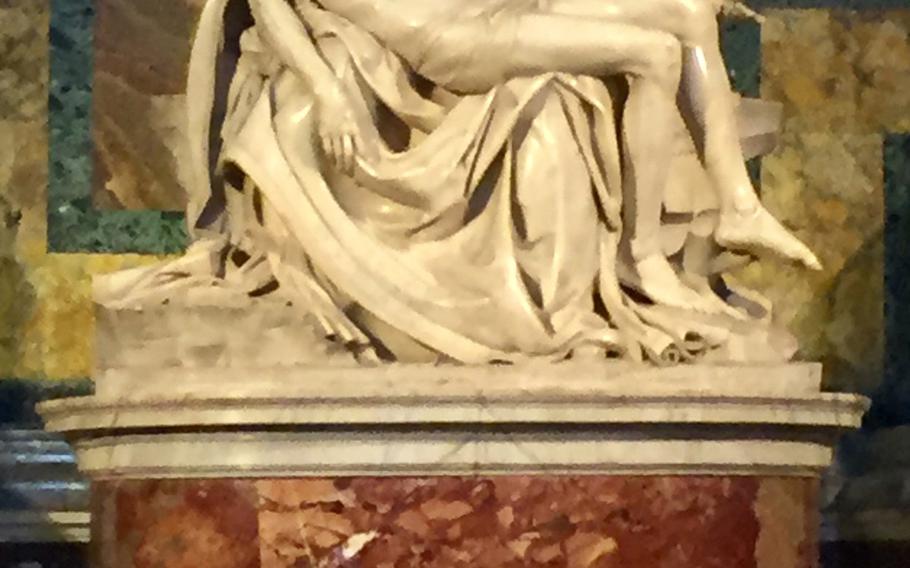 One of Michelangelo's first great sculptures, the Pieta, is displayed at St. Peter's Basilica in Rome. (Scott Wyland/Stars and Stripes) 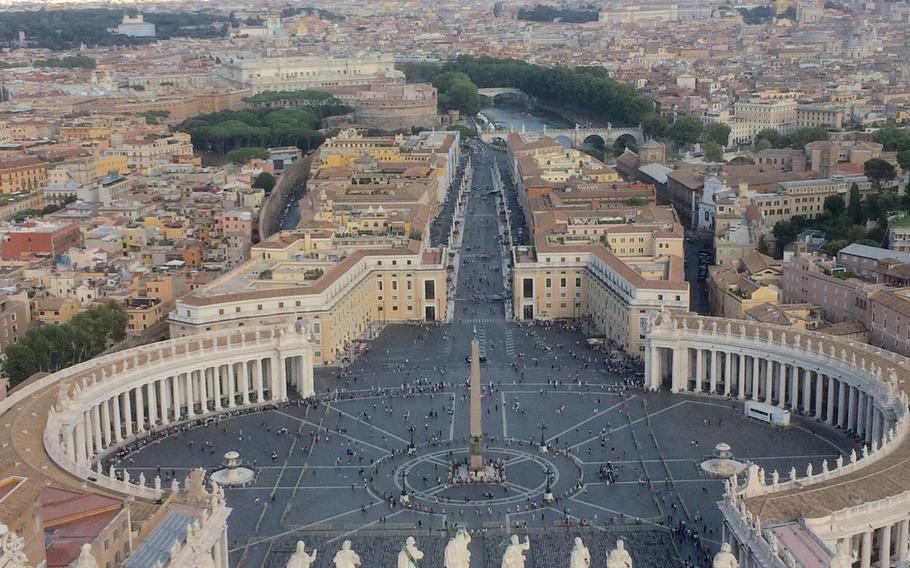 View of Vatican City from the topr level of the St. Peter's dome. (Scott Wyland/Stars and Stripes) Beautifully decorated niches can be found throughout St. Peter's Basilica in Rome. (Scott Wyland/Stars and Stripes) 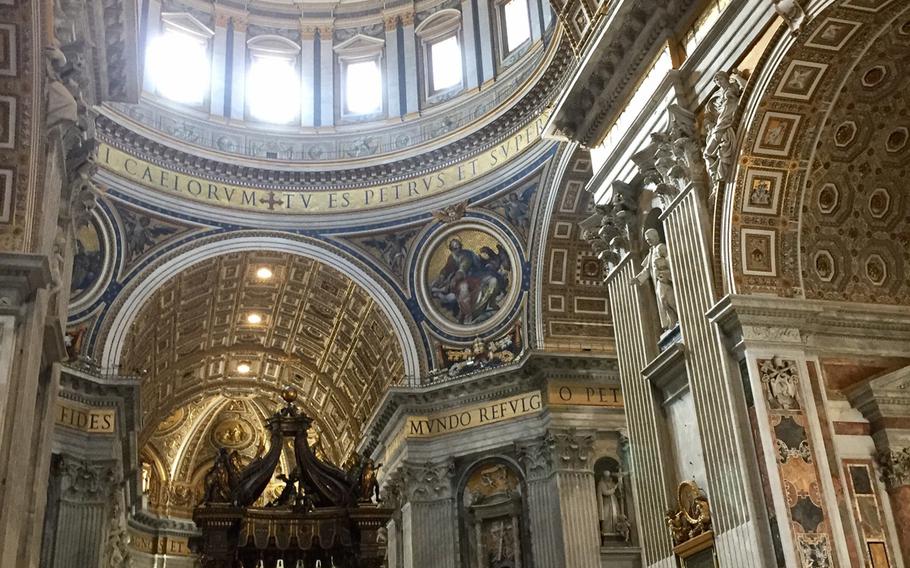 Visitors flock en masse to St. Peter's Basilica at Vatican City in Rome to take in this jewel of the Christian world, filled with majestic architecture and beautiful artwork. (Scott Wyland/Stars and Stripes) 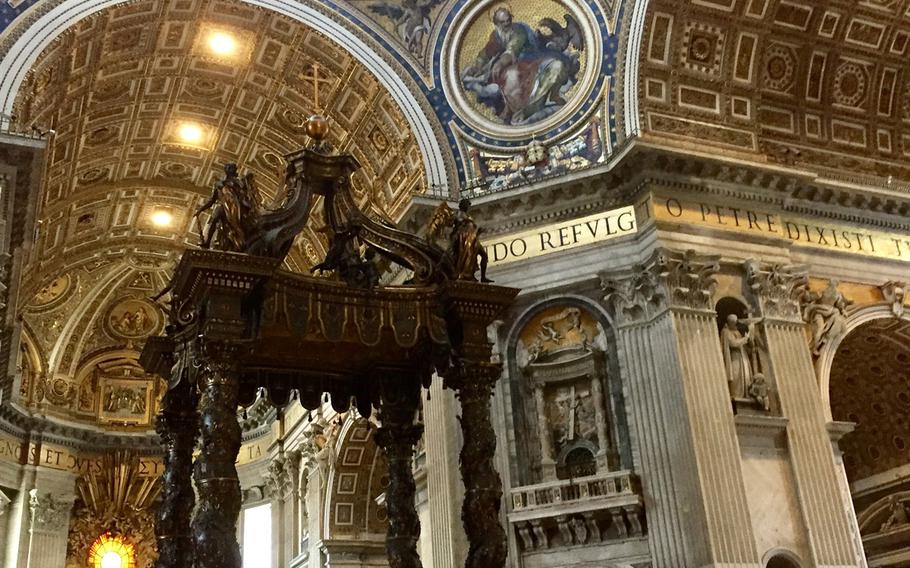 The canopy, known as St. Peter's Baccharin, and the high altar are positioned directly under the dome's oculus and above St. Peter's tomb in the basilica's lower levels. (Scott Wyland/Stars and Stripes)

St. Peter’s Basilica is just one facet of Vatican City, but is an awe-inspiring monument to Christianity overtaking paganism during the Roman Empire’s decline.

Everything about the basilica feels immense, including the dome, the 2,000-year history and the aura of mystery surrounding it.

The basilica is said to be the burial place of St. Peter, who was martyred during Nero’s persecution of Christians in A.D. 64. Peter is considered the first of the Roman Catholic popes, many of whom were buried at the basilica.

The basilica is perhaps the most spectacular religious shrine in the Western world, inspiring scholars to call it a pillar of Catholicism.

When you enter it, you feel overwhelmed by the architecture, artwork and rich history. A network of chapels, niches and vaulted ceilings adorned with Baroque trimmings encircle the central domed area.

You walk past Michelangelo’s famous Pieta, a marble sculpture of Mary holding the crucified body of Jesus. Then you approach the basilica’s centerpiece: the Chair of St. Peter.

In front of the chair is a 70-foot-tall bronze canopy that covers the papal altar. It stands directly below the dome’s oculus and above St. Peter’s tomb in the lower levels. The dome shines light toward St. Peter, symbolically linking the saint with the altar and the heavens.

The large, wooden chair, crafted as early as the sixth century, is encased in an intricate bronze gilt sculpted by Bernini. In the gilt, angels hover near a round, stained-glass window with a dove at the center. When sunlight brightens the stained glass, it creates an ethereal effect.

Visitors can go to the top of the dome for about 7 euros ($8) and enjoy a lofty view of Rome. You can walk up all 551 stairs if you want a workout, or take an elevator that costs a little more money and shaves off 200 steps.

The current basilica replaced the original one that Constantine, the first Christian Roman emperor, had built in 324 A.D. Work began on the second basilica under Pope Julius II in 1506, but wasn’t finished until 1626.

It has dazzled visitors ever since, including famous ones.

“I love St. Peter’s church,” the 19th-century American author Ralph Waldo Emerson once wrote. “It grieves me to think that after a few days I shall see it no more. It is an ornament of the earth.”

COSTS: There is no charge to visit the church unless you go to the top of the dome. That costs 7-10 euros ($8-12), depending on whether you take the stairs or the elevator. St. Peter’s also can be part of a larger Vatican museums tour, which costs about 50 euros.