Palmanova: Italian town tried to gird itself against enemies Porta Cividale is one of three gates allowing access to the town of Palmanova. The gate, on the eastern edge of the city, also houses Museo Storico Militare, a museum that details the city's military history. (Kent Harris/Stars and Stripes)

Porta Cividale is one of three gates allowing access to the town of Palmanova. The gate, on the eastern edge of the city, also houses Museo Storico Militare, a museum that details the city's military history. (Kent Harris/Stars and Stripes) 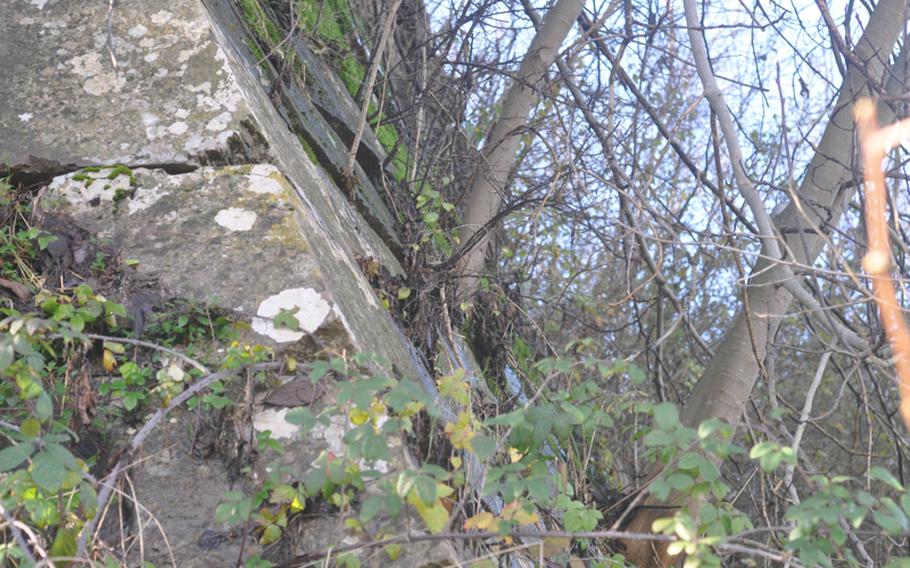 Much of the fortifications surrounding the town of Palmanova is being reclaimed by nature as evidenced in this picture that shows trees growing out of the walls. Palmanova was fortified by the Venetians, later occupied by Napoleon and part of the front during World War I. (Kent Harris/Stars and Stripes) A scene depicting Christ's crucifixion is painted on the ceiling behind the altar of the cathedral in Palmanova. It was started by Pompeo Randi and finished by Leonardo Riga in 1882. (Kent Harris/Stars and Stripes) 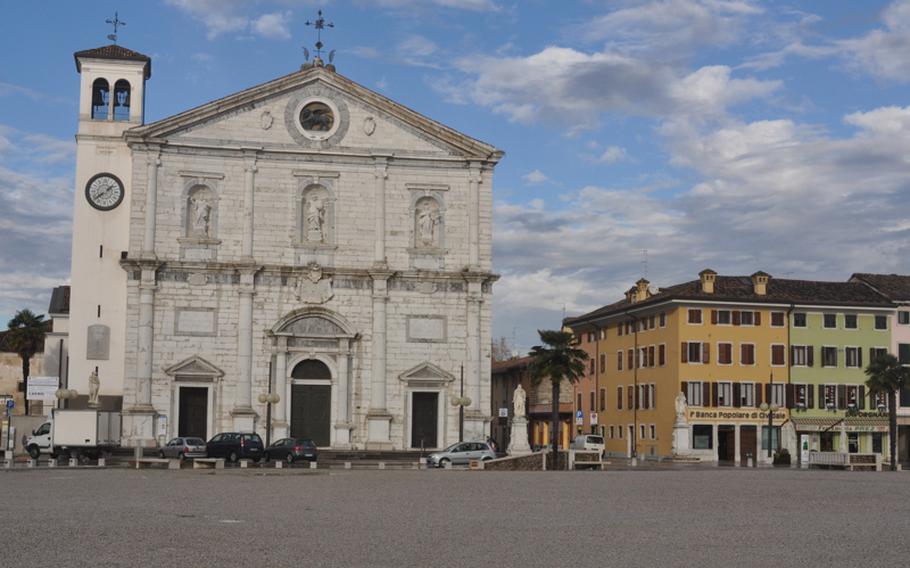 The cathedral of Palmanova, completed in 1636, faces the Piazza Grande, the town's main square. Six roads lead off from the gravel-strewn piazza. Three have gates that allow one-way entrance to the city. (Kent Harris/Stars and Stripes) Troops engaged in pitched battles are a thing of the past in Italy&rsquo;s most northeastern province. But in the town of Palmanova, that time doesn&rsquo;t seem so distant.

The town of about 5,500 inhabitants is less than an hour&rsquo;s drive from the border with Slovenia and not much farther from Italy&rsquo;s boundary with Austria. While like most Italian cities, its origins can be traced back thousands of years; the modern city started as a fortress built by the Venetian empire in the 16th and 17th centuries to prevent attacks from Austrian and Turkish forces. It didn&rsquo;t work, at least with the Austrians, who later took control of the area.

The Venetians, and later the French under Napoleon, constructed a series of walls and fortifications around the city core. They&rsquo;re built in the shape of a nine-pointed star, though that&rsquo;s difficult to discern except from a plane or helicopter.

Piazza Grande sits in the center of the town. The gravel-strewn hexagon is commonly used today as a place to set up temporary buildings for various festivals. But it could still easily serve as a parade ground for troops in formation.

Six roads lead away from the piazza. A series of roughly circular ring roads connect them. Three of the roads from the piazza pass through narrow gates that serve as the only way in and out of the town. Motorists don&rsquo;t have to worry about crossing the moat or passing through outer gates these days. Much of the outer fortifications are overgrown with vegetation and it takes a little imagination to picture what they must have looked like about 100 years ago.

A visit to one of the town&rsquo;s two museums, the Museo Storico Militare (military history museum), can help the imagination. Housed in the Porta Cividale, one of three town gates, it features uniforms, weaponry and documents from eras past. A pink brochure in English provides some details, but those really interested in exploring the museum and some of the nearby fortifications can do so by calling ahead and reserving a free English-speaking guide.

The town&rsquo;s other museum, the Civico Museo Storico (city history museum), is closed and undergoing renovations. It&rsquo;s next to the city tourist office a few steps from Piazza Grande.

The town&rsquo;s cathedral is located on the piazza. Completed in 1636 after a few starts and stops, it features a white exterior and a small bell tower &mdash; reportedly kept small enough that it wouldn&rsquo;t be a target for artillery bombarding the residents. It&rsquo;s much darker inside and features wooden beams on the ceiling and frescoes behind the altar.

Palmanova is just a short drive from several other potential destinations, including Aquileia and Grado. Those interested in strictly modern structures &mdash; such as outlet malls &mdash; can join the marching (and shopping) hordes by heading straight through the traffic lights at the freeway and bypassing the town altogether.

DIRECTIONSPalmanova is just off autostrada A4 about 50 miles east of Aviano Air Base. From Aviano, follow A28 to Portogruaro, then take A4 toward Trieste and then the first exit after the highway splits. Turn left at the traffic lights after exiting the toll booth. Parking inside the town in spaces marked in blue requires a ticket or is restricted for shorter stays (by using the blue parking meter in your car). There&rsquo;s some free parking at the Museo Storico Militare and more at Piazza XX Septembre. Take Contrada Donato off the main square and turn right after two blocks.

TIMESSimilar to many towns that are secondary tourist destinations in Italy, Palmanova gets quiet in the winter. One of its two museums, the Civico Museo Storico, is closed for renovations and officials aren&rsquo;t sure when it will reopen. The other museum, Museo Storico Militare (military history museum), is open 9 a.m. to noon Monday through Friday and 2-4 p.m. Monday through Thursday; and 10 a.m. to noon Saturdays and holidays. The city&rsquo;s cathedral is open 9 a.m. to 7 p.m. daily; tourists are asked to respect worshippers during services.

FOODPalmanova isn&rsquo;t known for any particular kind of food. It&rsquo;s just a short drive from the Adriatic Sea, so fresh seafood is an option. Most restaurants offer traditional dishes from Friuli-Venezia Giulia. Menus in English are not common.

INFORMATIONThe tourist office is at 4 Borgo Udine, less than a block from Piazza Grande. The staff speaks English and offers maps and brochures of the city and other areas of Friuli-Venezia Giulia. It is open 9:30 a.m. to 12:30 p.m. and 3:30-6:30 p.m. daily, but closed Wednesday and Sunday afternoons. It also will be closed most of January. Its website is www.palmanova.it, with an English-language option. To arrange an English-speaking guide for the military museum and fortifications, call 0432-928175.&mdash; Kent Harris