Oahu cruise brings you face to fin with dolphins Spinner dolphins come up for air off the northwest coast of Oahu, Hawaii, May 3, 2016. (Wyatt Olson/Stars and Stripes)

Spinner dolphins come up for air off the northwest coast of Oahu, Hawaii, May 3, 2016. (Wyatt Olson/Stars and Stripes) 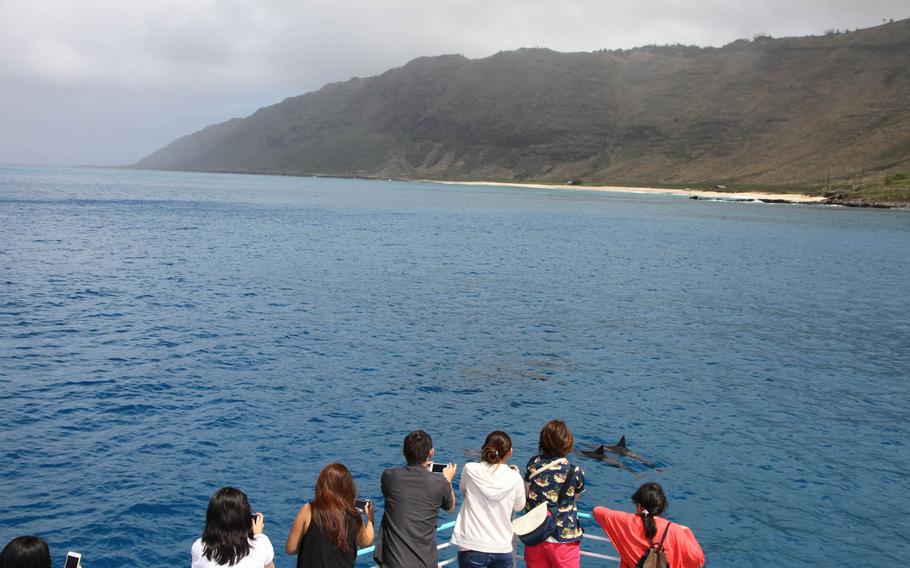 Guests gather on the lower bow of the Dolphin Star to get an up-close look at a pair of dolphins rising to the surface during a cruise along the northwest shore of Oahu, Hawaii, May 3, 2016. (Wyatt Olson/Stars and Stripes) Ca[t. David Irick of the Dolphin Star describes the shoreline during a wild dolphin watch northwest of Oahu, Hawaii, May 3, 2016. (Wyatt Olson/Stars and Stripes) A quad of dolphins move in unison in waters just off the northwest coast of Oahu. The dolphins are asleep, so their movements are slow and graceful. (Wyatt Olson/Stars and Stripes) 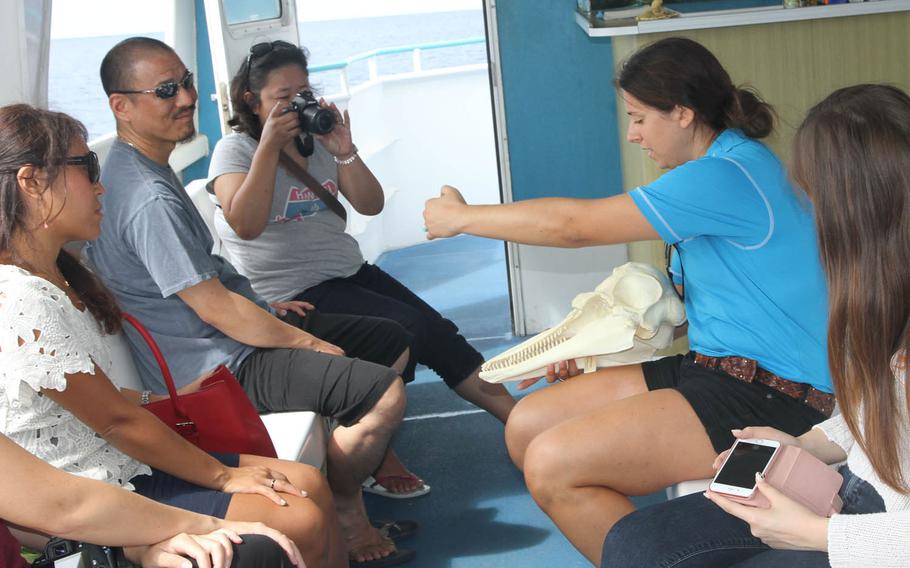 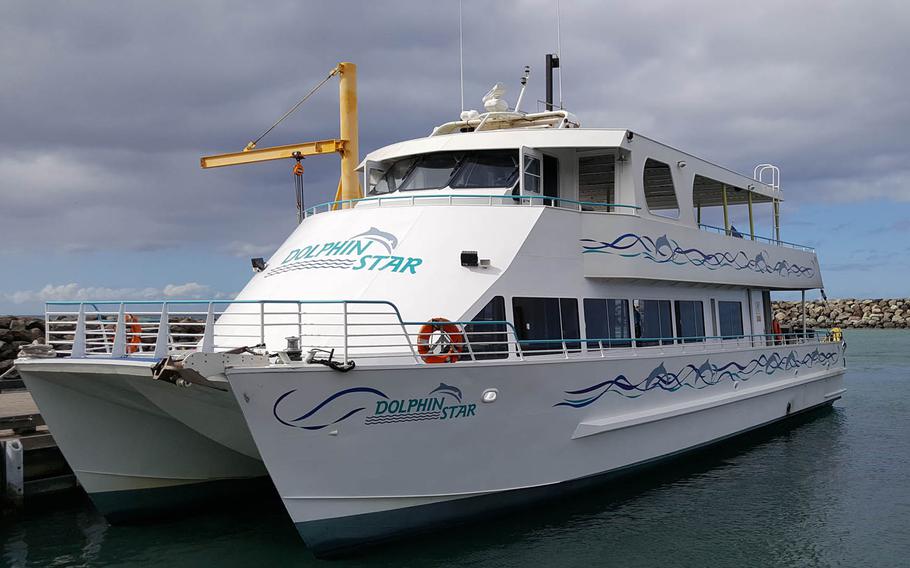 The Dolphin Star was designed and built for the pleasure of viewing dolphins in the wild. (Wyatt Olson/Stars and Stripes)

Zoos, aquariums and waterparks are great places to view nature up close, but there’s nothing like seeing the wild kingdom in the wild.

That’s a challenge if you want to get close to creatures that inhabit the big blue sea. Dolphins make that undertaking a bit easier, however, because they have a natural affinity for humans and the boats we sail.

There are a number of cruises on Oahu that will take you face to fin with dolphins in the wild, but among the best is the half-day cruise on the Dolphin Star, a double-deck boat custom built for dolphin watching and snorkeling.

The cruise departs from a pier an hour’s drive north of downtown Honolulu. I went on a weekday morning cruise, which luckily had far fewer people than the boat’s 149-passenger capacity would allow. The crew members seemed to be genuinely having a good time, with a goal of helping everyone see as many dolphins as they could.

The boat pulled out of Wai’anae Boat Harbor and then zipped north along the Oahu coastline for about a half-hour. The sea was quite calm that day; nevertheless, a few guests succumbed to seasickness.

When we reached our destination of the waters just off Makua Beach, Capt. David Irick pulled back the throttle so we were pretty much drifting for the next hour. From the helm, Irick scanned for pods of dolphins, which were slowly meandering near the surface. He’d rev the engine briefly to set us drifting toward them.

These were spinner dolphins, a relatively small kind — an adult is about the size an average person. They’re known for their acrobatic antics, such as spinning as they leap from the water, their white bellies flashing as they rotate.

Dolphins are a nocturnal sea mammal, so what you’ll see during a day cruise like this are sleeping dolphins, said Kelsey Dixon, a Dolphin Star crewmember who at one point in the trip showed visitors a model dolphin skull.

The weird thing is, they don’t look like they’re asleep. They wriggle and flap along, rise to the surface for air, and then plunge under again. Occasionally, one will leap out of the water in the fashion you’d see at a sea park show.

Dolphins have developed a type of functioning sleep called “unihemispheric slow-wave sleep,” during which half the brain shuts down. Scientists have analyzed the phenomenon using brain scans. The eye closes on the opposite side of that sleeping hemisphere, so the dolphin gets shut-eye — literally.

The awake half of the brain monitors the environment and, most importantly, keeps the dolphin rising to the surface for oxygen. Dixon said this is why you’ll often see the dolphins swimming in pairs during the daytime. Each keeps its “awake” eye facing out to search for possible predators.

As we made our way through various pods of dolphins, they would arch out of the water for air, looking every bit graceful, tranquil and, yes, drowsy.

The Dolphin Star was built to provide 360-degree views, and I found myself circling around the boat as I’d hear oohs and ahs when a new pod had been sighted.

I’m not sure what the dolphins were seeing with their one-waking eyes, but it must surely have been a spectacle with dozens of people leaning over a gunwale and shrieking with excitement. They didn’t seem to perceive it as a danger. Perhaps they woke in a few hours and thought it was all a dream.

For most of us who’ve seen dolphins, it’s likely been at a sea park, where they go through the stunts they’ve been trained to perform. The nice thing about seeing them from the Dolphin Star is that we finally get a glimpse of their world without the manmade bag of tricks.

Cruises depart from Wai’anae Boat Harbor, about an hour drive northwest of downtown Honolulu, at 85-491 Farrington Highway, Wai’anae, Hawaii. From downtown, take Interstate H-1 west to the Interstate H-201 bypass, then return to H-1. The interstate ends and becomes Highway 93, also called Farrington Highway. Drive along the coast until you see the sign for the boat harbor on your left. Drive toward the pier and park to the right of the restrooms as you’re facing the harbor. Look for the double-deck Dolphin Star, which is likely to be the largest boat there.

The cruise I chose provided a barbecued hamburger lunch, with ample toppings plus potato chips and brownies. The beef patties were top notch and hot off the grill. If I went again, however, I’d probably skip the meal, as the additional $17 cost was a bit much.