Now a warning: Tattoos can come with health and career hazards 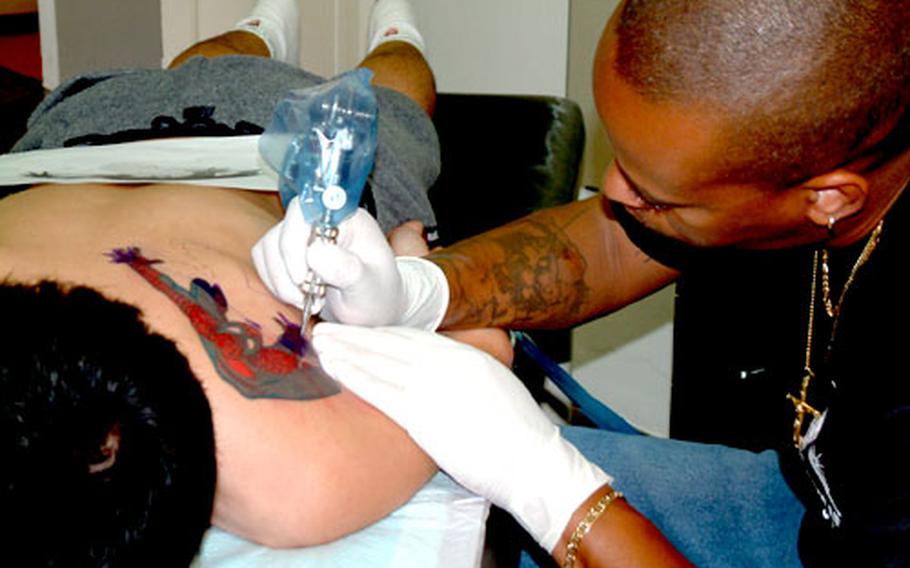 Cleanliness is a major concern for Ken Schuur, who disposes needles after a one-time use and makes sure his equipment is kept sterile. Not all tattoo artists are that careful, though. (David Allen / S&S)

Lt. Cmdr. Dale Baker has a few words of advice for service members considering getting tattoos.

There are no health regulations for tattoo parlors in Japan.

&#8220;How well is the equipment sterilized? The risk of infection is always there. And if an infection does set in it could result in the disfiguring of the tattoo so you don&#8217;t get what you wanted,&#8221; he says. &#8220;And then there are the concerns about contracting hepatitis B and C or being HIV positive &#8212; those are the three big ones.&#8221;

Baker says there have been few such cases since he has been on Okinawa.

Removing tattoos by laser surgery and skin grafts can be an expensive and lengthy process.

The language of the regulations concerning tattoos may differ slightly among the services, but it all boils down to banning any tattoo that detracts from a good military appearance. All services prohibit visible tattoos on the neck, face and hands and any body art that could be deemed gang-related, racist, sexist, obscene, extremist or drug-related.

Also, candidates for officer candidate schools can be ruled ineligible if they have tattoos on their forearms.