‘Normal humans wouldn’t do that’ 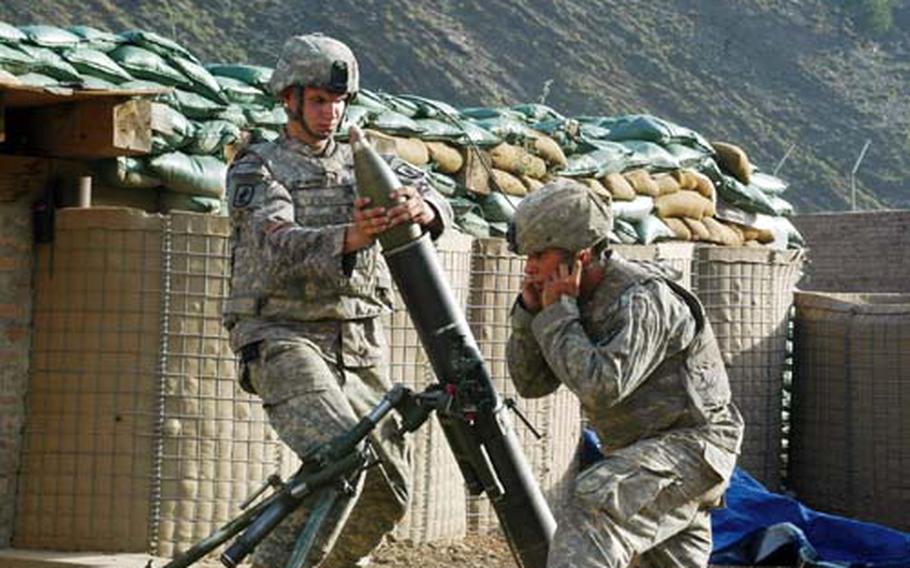 Pfc. Sergio Abad, right, covers his ears just before his mortar fires on an enemy position at Camp Blessing on June 21, 2008. Three weeks later, Abad was among nine soldiers killed defending their vehicle patrol base in Wanat, Afghanistan. (Courtesy of the U.S. Army)

Pfc. Sergio Abad, right, covers his ears just before his mortar fires on an enemy position at Camp Blessing on June 21, 2008. Three weeks later, Abad was among nine soldiers killed defending their vehicle patrol base in Wanat, Afghanistan. (Courtesy of the U.S. Army) 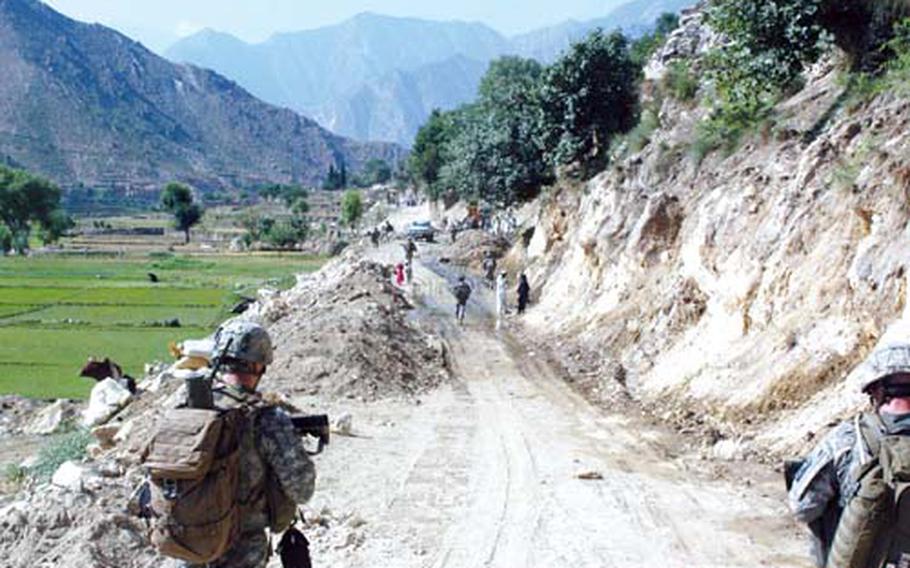 First Lt. Jonathan Brostrom, left, leads a patrol through a village near Camp Blessing on June 22, 2008. Three weeks later, Brostrom would be one of nine soldiers in his company to die while defending a vehicle patrol base in Wanat. He was posthumously awarded the Silver Star. (Courtesy of the U.S. Army)

It was the deadliest single battle for American soldiers since the U.S. invasion of Afghanistan.

Nine soldiers from the 2nd Battalion, 503rd Infantry Regiment&#8217;s Chosen Company lost their lives on July 13, 2008, defending a vehicle patrol base in Wanat in eastern Afghanistan. And the group of soldiers who took part is turning out to be among the most highly decorated in recent memory.

Each day, locals warned the U.S. troops of an impending attack.

"There was intelligence an attack would occur," according to an Army "15-6" report regarding the battle, "but this was to be expected for the Waygal District." Troops expected a "probing attack" of around 20 militants.

Instead, at around 4:20 a.m., the force of 200 enemy fighters launched a complex, well-organized attack that first targeted the troops&#8217; heavy weapons.

The first rocket-propelled-grenade and machine-gun fire came at dawn, strategically striking the mortar pit. The insurgents next sighted their RPGs on the tow truck inside the combat outpost, taking it out.

This was not a haphazard attack. The insurgents fought from several positions. They aimed to overrun the new base. The U.S. soldiers knew it and fought like hell.

The next target was the FOB&#8217;s observation post, where nine soldiers were positioned on a tiny hill about 50 to 75 yards from the base. Of those nine, five died and three were wounded.

When the attack began, Spc. Tyler Stafford grabbed his M-240 machine gun off a north-facing sandbag wall and moved it to an east-facing wall. Moments later, RPGs struck the observation post, knocking Stafford out of the fighting position and wounding another soldier.

Soon, a grenade exploded near Stafford, blowing him down to a lower terrace at the observation post and knocking his helmet off. He put his helmet back on and noticed how badly he was bleeding.

Cpl. Matthew Phillips was close by, so Stafford called to him for help. Phillips was preparing to throw a grenade and shot a look at Stafford that said, "Give me a second. I gotta go kill these guys first."

This was only about 30 to 60 seconds into the attack.

Kneeling behind a sandbag wall, Phillips pulled the grenade pin, but just after he threw it an RPG exploded at his position. The tail of the RPG smacked Stafford&#8217;s helmet. The dust cleared. Phillips was slumped over, his chest on his knees and his hands by his side. Stafford called out to his buddy three or four times, but Phillips never answered or moved.

"When I saw Phillips die, I looked down and was bleeding pretty good, that&#8217;s probably the most scared I was at any point," Stafford said while sitting in a bed at Landstuhl Regional Medical Center in Germany a few days after the attack. "Then I kinda had to calm myself down and be like, &#8216;All right, I gotta go try to do my job.&#8217;&#8197;"

After firing some rounds from his 9 mm handgun and another soldier&#8217;s M-4 rifle, he low-crawled to another fighting position where Cpl. Jason Bogar, Sgt. Matthew Gobble and Sgt. Ryan Pitts were located. Stafford told Pitts that the insurgents were within grenade-tossing range.

That got Pitts&#8217; attention. With blood running down his face, Pitts threw a grenade and then crawled to the position from where Stafford had just come. Pitts started hurling more grenades.

Bullets cut down tree limbs that fell on the soldiers.

Back at Stafford&#8217;s position, so many bullets were coming in that the soldiers could not poke their heads over their sandbag wall. Bogar stuck an M-249 machine gun above the wall and squeezed off rounds to keep fire on the insurgents. In about five minutes, Bogar fired about 600 rounds, causing the M-249 to seize up.

At another spot on the observation post, Cpl. Jonathan Ayers laid down continuous fire from an M-240 machine gun, despite drawing small-arms and RPG fire. Ayers fired until he was shot and killed.

Cpl. Pruitt Rainey radioed the FOB with a casualty report, calling for help.

Of the nine soldiers at the observation post, Ayers and Phillips were dead, Cpl. Gunnar Zwilling was unaccounted for, and three were wounded. Additionally, several of the soldiers&#8217; machine guns couldn&#8217;t fire because of damage ... and they needed more ammo.

All this within the first 20 minutes of the fight.

Platoon leader 1st Lt. Jonathan Brostrom and Cpl. Jason Hovater arrived at the observation post to reinforce the soldiers. By that time, the insurgents had breached the perimeter. Gunfire rang out, and Rainey shouted, "He&#8217;s right behind the sandbag."

Brostrom could be heard shouting about the insurgent as well.

The insurgents then started chucking rocks at Gobble and Stafford&#8217;s fighting position, hoping that the soldiers might think the rocks were grenades, causing them to jump from the safety of their fighting hole. One rock hit a tree behind Stafford and landed directly between his legs. He braced himself for an explosion. He then realized it was a rock.

Stafford didn&#8217;t have a weapon, and Gobble was low on ammo. Gobble told Stafford they had to get back to the FOB. They didn&#8217;t realize that Pitts was still alive in another fighting position at the observation post.

Gobble and Stafford crawled out of their fighting hole. Gobble looked again to where the soldiers had been fighting and reconfirmed to Stafford that Brostrom, Rainey, Bogar and others were dead.

Gobble and Stafford low-crawled and ran back to the FOB. Coming into the FOB, Stafford was asked by a sergeant what was going on at the observation post. Stafford told him all the soldiers there were dead. Stafford lay against a wall, and his fellow soldiers put a tourniquet on him.

From the observation post, Pitts got on the radio and told his comrades he was alone. At least three soldiers went to the OP to rescue Pitts, but they suffered wounds after encountering RPG and small-arms fire.

At that time, air support arrived in the form of Apache helicopters, A-10s and F-15s, bombing and strafing.

When the attack began, Sgt. Jacob Walker was on the FOB. He grabbed an M-249 and started shooting toward a mountain spur where he could see some muzzle flashes. Walker put down 600 to 800 rounds of ammunition.

He got down behind the wall he was shooting from to load more ammo and was told they were taking fire from the southwest. He threw the bipod legs of his machine gun onto the hood of a nearby Humvee. A bullet struck Walker&#8217;s left wrist, knocking him to the ground. A soldier applied a tourniquet to Walker and bandaged him.

Walker and two other wounded soldiers distributed their ammo and grenades and passed messages.

The whole FOB was covered in dust and smoke, looking like something out of an old Western movie.

Two hours after the first shots were fired, Stafford made his way &#8212; with help &#8212; to the medevac helicopter that arrived.

Three of the soldiers who died that day were posthumously awarded the Silver Star, the Army&#8217;s third highest award for valor. Brostrom, Ayers and Sgt. Israel Garcia died in or around the observation post.

Pfc. Sergio Abad was mortally wounded at the start of the attack in the mortar pit.

Col. Bill Ostlund, who commanded the battalion and is now deputy commander of the 75th Ranger Regiment, said in an interview a few weeks later that it was obvious that enemy forces had scouted the location because they knew exactly where to direct their attacks.

Insurgents fired on the Americans from every building in the adjacent village &#8212; including the mosque &#8212; as well as a variety of positions set up around the perimeter.

"All the other engagements we were in, you had a big stone wall or a rock to hide behind or a part of the mountains where they weren&#8217;t firing from," said Spc. Tyler Hanson, who earned the Bronze Star with "V" device that day. "Here, there was nothing."

Most of their deeds during the battle have been covered in articles over the last few months, though all prefer not to talk about their own actions.

"They need to be remembered," Scantlin said. "Our sacrifices &#8230; they gave the ultimate sacrifice. What more can you give?"

Ostlund said the amount of fire his soldiers took was "unbelievable." Soldiers from the battalion had been under fire hundreds of times before during the tour. But they were often in fortified positions or inside their Humvees.

Since the compound was just being set up, there was a contingent of Army engineers on hand just starting their work.