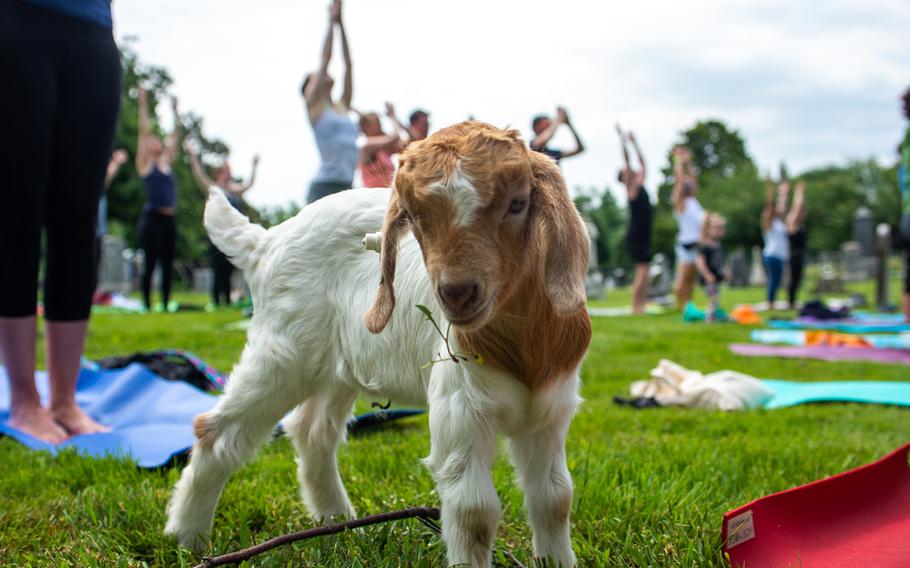 Who wouldn't want to do yoga next to this little guy? (Orion Donovan-Smith/The Washington Post)

It seemed like a terrific idea ... at the time.

Grammy was coming to visit for her birthday. Over the years, we’d given her every lousy present from ill-fitting sweaters, to redundant casserole dishes, to hardware store gift cards, to complicated electronics she would never use. It was high time we put real thought into Grammy’s special day.

It hit me while I was driving past a local farm. “What if we surprised Grammy with a goat yoga session for her birthday?” I suggested to my daughters, Anna and Lilly, seated in the car with me.

“That would be SO fun!” Anna exclaimed. We were unable to contain our own selfish excitement at the prospect of snapping selfies with adorable goats in the name of Grammy’s birthday.

While most 70-something grandmothers would not want a cloven farm animal standing on her back, Grammy had always been fearless with all manner of bugs, reptiles and furry creatures ... and, oddly, fascinated with their scatology. So, Anna, Lilly and I surprised her. “In honor of your birthday, we’re having ‘Girls’ Night Out,’ complete with Sunset Goat Yoga followed by dinner at a Thai restaurant!”

Although it sounded like the perfect girls’ night to us, Grammy’s stunned expression begged for more information. “Don’t worry, Mom,” I assured her, “we’re going to a quaint, historic farm, and as the sun kisses the horizon, we’ll be meditating on yoga mats in a flowered meadow while adorable baby goats frolic around us ... Doesn’t that sound fabulous?”

We piled out of the car at the farm and waited outside the barn as instructed, as the farm hands retrieved goats on leashes for each of us. Lilly was assigned Herb, Anna had Daisy, Grammy had Wilson, and I had Sugar. I had expected curious and compliant goats, but these young kids pulled fiercely on their restraints, bleating to the hills to be returned to the comfort of their dung-heaps.

The farm hands told us to walk our goats up a muddy road to the field at the top of the hill, where the yoga instructor would teach our class. They advised, “If they run, run with them. If they resist, pick them up. But watch the horns!”

I looked down at Sugar, straining on her lead. “Is that mud running down the backs of her legs?” I wondered, resolving to not carry her. The scene soon looked like an old Keystone Cops reel, each of us trying desperately to coax our goats up the hill, getting tangled in each other’s leashes, sporadically running, and trying awkwardly to pick up the animals.

I finally resorted to carrying Sugar, with my head turned reluctantly toward her caked backside to keep from having my eyes poked out. By the time we all reached the yoga location, we were sweating, traumatized and smudged with poo.

We rolled mats out between the cow pies, and our yoga instructor began, “Today, we will experience real life with all its beauty and distractions.” A giggle erupted when a goat urinated. “Yes, the goats are funny, but let’s be mindful of our bodies now. Feel the breeze, hear the birds, smell” —

A goat hopped onto Anna’s lap, and Lilly hooted and fumbled to snap photos. A goat nibbled on Grammy’s hair.

“He thinks it’s hay!” my mother joked, and the entire class cracked up.

The hilarity continued through lotus position, downward-facing dog, grasshopper and warrior pose, while the goats hopped, bucked, gnawed, yanked and tugged their way into our hearts. Even mucky Sugar won me over when she nuzzled my neck and nibbled my ponytail. Meditation and mindfulness seemed impossible, but suddenly I became very mindful when I realized Sugar had my entire ponytail down her throat. Clearly, laughter was the best therapeutic technique under the circumstances.

Over green curry and sake, I asked Grammy what she thought of goat yoga. She mustered her inner diplomat: “Hmm, well, I must say, it was VERY authentic.”