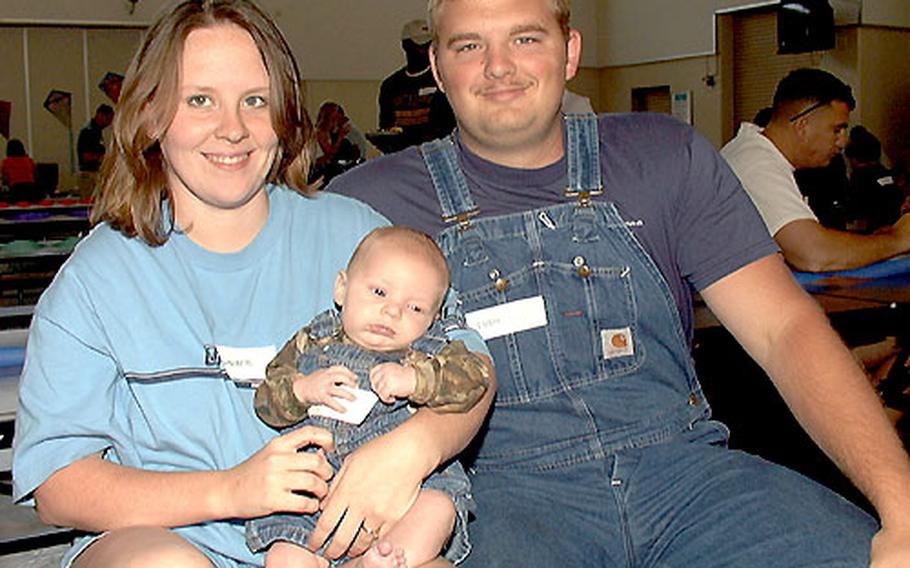 Airman 1st Class Josh Bowlin and his wife Jennifer pose with their 10-week-old son Eli at the Neonatal Intensive Care Unit Reunion. Eli spent a week at the hospital recovering from pneumonia after his birth. (Mark Oliva / S&S)

Airman 1st Class Josh Bowlin and his wife Jennifer pose with their 10-week-old son Eli at the Neonatal Intensive Care Unit Reunion. Eli spent a week at the hospital recovering from pneumonia after his birth. (Mark Oliva / S&S) For a moment, it was hard to tell if the Neonatal Intensive Care Unit&#8217;s Reunion on May 10 was for the babies or the adults.

For one afternoon, more than two dozen babies, another couple dozen brothers and sisters and their doting parents gathered at Lester Middle School&#8217;s cafeteria to get reacquainted with little faces and old friends. Each family is a miracle story. These are families whose children were born early or born sick. One girl was born only 23 weeks into pregnancy. Others overcame hurdles in their first days. Eli was one of those babies, fighting pneumonia and spending a week in the NICU.

At the reunion, it was like they never left. Nurses, who once stood over monitors and coaxed Eli through his first days, now hovered over him with expectant smiles.

&#8220;This gives us an opportunity to see the fruits of our labor,&#8221; said Air Force Capt. Karen Larry, a NICU nurse attending her fourth NICU reunion. &#8220;They&#8217;re miracles. All preemie babies in the NICU have had to fight to be here. The families had to endure some tough times.&#8221;

Larry said most parents expect birth to be a joyful time. Little fingers and little toes and little cries wrapped up in baby blankets are the dream most people expect. But most of these families put off those dreams when their children were born. Instead of soft lullabies, beeping alarms and monitors surrounded them.

The gathering is as much about reassurance as it is about celebration, she added.

The reunion, for the Bowlins, lived up to its name. The gathering was like a homecoming, complete with familiar faces and welcoming hugs for their son.