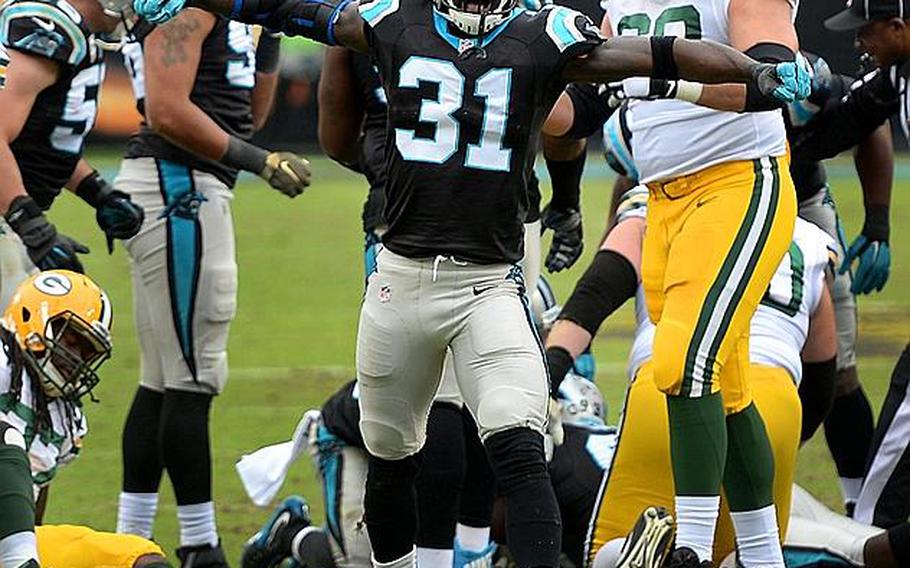 Carolina Panthers cornerback Charles Tillman celebrates a defensive stop during the second quarter against the Green Bay Packers on Nov. 8, 2015, at Bank of America Stadium in Charlotte, N.C. Tillman, who was an Army brat and attended 11 schools as his father moved from base to base in the U.S. and Germany, shares the lessons he learned while growing up in "The Middle School Rules of Charles Tillman," as told to Sean Jensen. (TNS)

Carolina Panthers cornerback Charles Tillman celebrates a defensive stop during the second quarter against the Green Bay Packers on Nov. 8, 2015, at Bank of America Stadium in Charlotte, N.C. Tillman, who was an Army brat and attended 11 schools as his father moved from base to base in the U.S. and Germany, shares the lessons he learned while growing up in "The Middle School Rules of Charles Tillman," as told to Sean Jensen. (TNS) 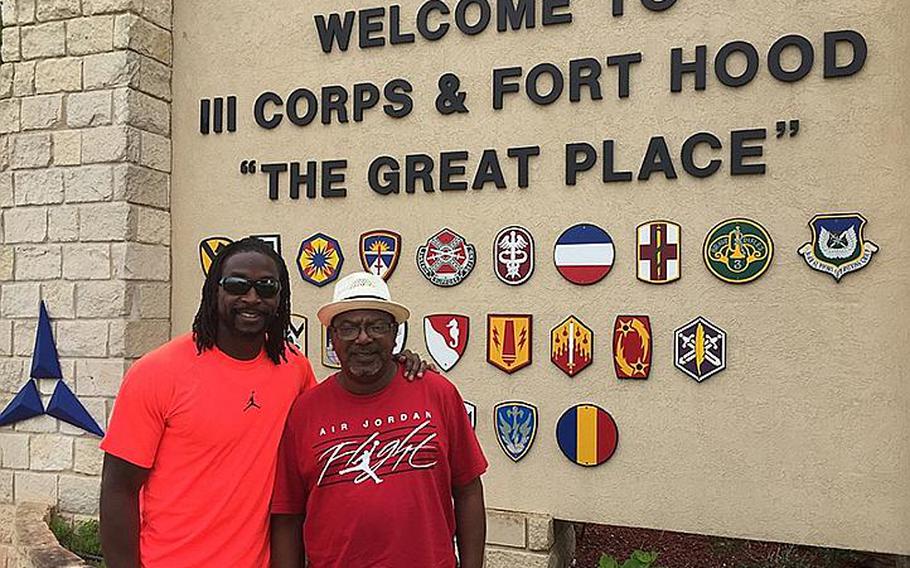 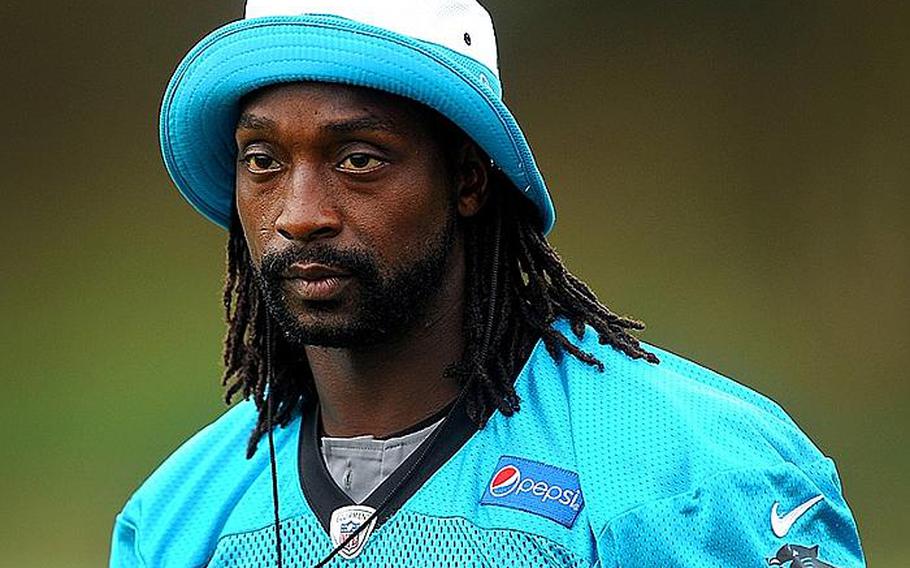 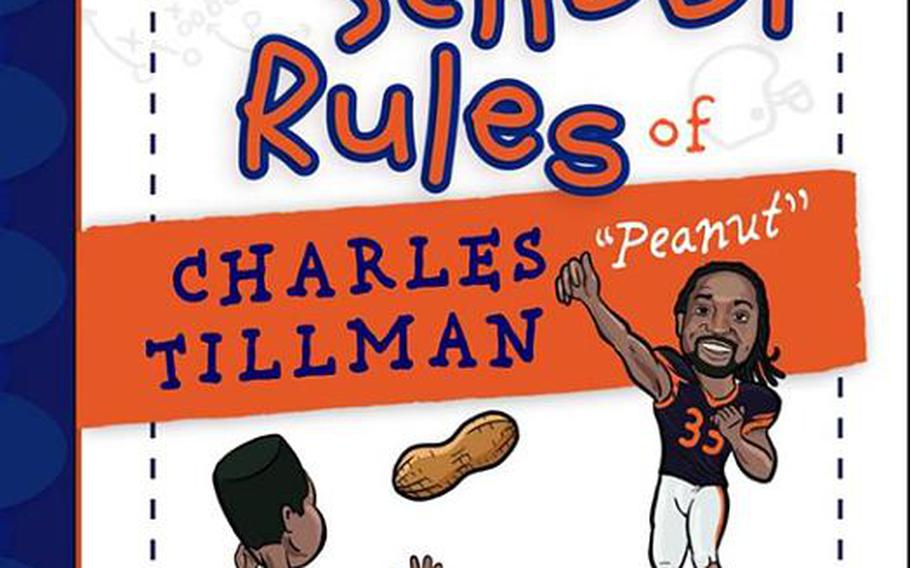 "The Middle School Rules of Charles Tillman," as told by Sean Jensen (Courtesy of The Brand Amp)

As the son of a career Army man, Charles “Peanut” Tillman knows all about rules.

Now the veteran NFL defensive back is sharing with kids the rules he learned while growing up.

As told by Sean Jensen, “The Middle School Rules of Charles Tillman” is a kid-friendly collection of life lessons framed by Tillman’s experiences as a military dependent, little brother, typical teenager and budding high school football star. Topics include bullying, making friends in a new town, struggling in school, the death of a loved one, racial profiling and his parents’ divorce.

Tillman, a cornerback for the Carolina Panthers after 12 seasons with the Chicago Bears, went to 11 schools as his father moved from base to base in the U.S. and Germany before settling at Fort Hood, Texas, where Charles was a three-sport star at Copperas Cove High School. Jensen, a former NFL beat writer and fellow military brat (Air Force) who covered Tillman in Chicago, created the “Middle School Rules” series and wrote the first installment with Tillman’s then-Bears teammate Brian Urlacher.

Tillman’s story is the second in the series.

Tillman, 34, is a two-time Pro Bowler and the 2013 recipient of the Walter Payton NFL Man of the Year Award for his charity work. He’s quick to point out, though, that he didn’t always make the best choices along the way. He believes there is the need for a book such as this one in the marketplace, and he hopes that children and parents find it a valuable learning tool.

Tillman’s father, Donald, who retired from the Army in 1997 after 20 years of service, gives the book a glowing endorsement.

“I was truly impressed with a lot of the things he remembered.” he said by telephone from a suburb of Fort Hood, where he now works at a VA hospital. “And I said (to myself), well, I guess (my kids) were listening to me. They did take my advice, and listen to my rules.”

Charles Tillman spoke to Stars and Stripes on Nov. 10 in a telephone interview about “The Middle School Rules.”

Stars and Stripes: Why did you decide to write this book with Mr. Jensen?Tillman: Well, he persuaded me to read Brian’s book, and I read it and thought it was an amazing piece. I liked the idea, and I liked the concepts, and I felt like it was a good fit. Typically, when adults write autobiographies or biographies or books, they’re geared toward adults. Kids, they look up to athletes. They wear their jerseys, they get their trading cards and things like that, so why not write a book about your childhood to kids who already look up to you? Our book is about my struggles — the good and the bad — when I was a kid. There’s a ton of information, tons of short chapters, that kids can hopefully relate to and identify with. I wasn’t Charles Tillman the football player all the time. I was Charles Tillman the knucklehead at some point in time. I didn’t always make the best choice or the right decision. And hopefully there’s a kid out there who’s like, “Wow, man, I can learn a lot [from the book].” My goal is if there’s a kid out there, 10 to 16 years old, that reads this book and he learns something (and says), “Wow, that happened to me the other day, I’m reading this book, wow, I didn’t know Charles Tillman went through that, maybe I should do what he did,” and learn something from it.

What did you learn about yourself when you were putting the book together? I guess one of the things I learned is that I’ve got a pretty good memory, to remember all of these stories. I had a good childhood. More than anything, I was blessed with two parents (Arbria and Donald) that did an amazing job of raising me. Not to say that I didn’t make mistakes, because I did. I’m not perfect; far from it. But my parents did an amazing job of instilling the morals and values I have in my life. Teachers and coaches (did) as well. I think that’s something that lacks nowadays, that kids are lacking, is that discipline from mom and dad. My dad thought highly about discipline and respect toward adults. [He was] a military sergeant, so that was something we ... had to have respect in our house.

I read your book, and found it very enjoyable. I plan to have my daughter read it as well. She’s 9, so I think she could really start to get a lot out of it. Oh yeah. I have a 10-year-old. She just turned 10 a month ago, and she loved it. The thing that was cool from her (was) she said, “Wow, Dad, I didn’t know you had to deal with this. Hey, Dad, what’s profiling? What does that mean?” So we were able to talk about some really important topics. I want my kids to look up to a good role model. My daughter loves Taylor Swift. So the minute Taylor Swift slips up, it’s no more Taylor Swift for my daughter. It’s on to the next role model. I want to be a good role model for my kids, but I know kids are out there who have my trading card, they have my jersey, therefore their parents are telling them, “Yeah, Charles Tillman is a good guy, he does this, this and this,” so I want to live up to my name. I want to live up to my reputation. I think parents can get a lot out of this book, as well as kids.

It seems like a good way to get into a lot of these topics in a way that’s maybe not quite so heavy; kind of ease them into it a little bit. Exactly.

How hard do you think it is for kids now compared to when you were in this age group? How hard is it for them growing up now to follow the rules? I think it’s harder for kids in this generation, and I’d probably say social media plays a big role for kids today. Social media can be an amazing tool in using it the right way. But, at the same time, kids are young and immature, (and) they post things that they shouldn’t post, they do things that they shouldn’t do. They say things they shouldn’t say. And then they post about it for the world to read. These are things that are on the Internet forever. I didn’t think about the mistakes I was making when I was 12, 15, not thinking that would affect me later when I was 34, 35, 25; I didn’t think about that stuff. Nowadays, when you do something on the Internet, it has a lifetime effect on you. And once it’s up there, you’re not getting it down, so I definitely think that kids have it a lot harder, just from a social-media standpoint. I think that makes it harder on kids.

How did being a military dependent help you achieve your goal of playing in the NFL, or was that even a factor at the age when you were traveling around the world? I don’t know if it helped me with my goal of the NFL, but one of the things that I really liked about the military lifestyle was the ability to adapt to new surroundings and new environments. Learning on the fly. The way I look at it, it was a sink-or-swim mentality. I went to three schools in third grade. Three schools in sixth grade. Two schools in seventh grade. One of the things that I learned was, going from school to school, some schools are on different paces. They’re on a different schedule. So when I was in third grade, we didn’t start cursive writing yet or something like that, and then I moved to another school in Ohio and they were already doing cursive writing. So I was behind. I had to figure it out. So I taught myself how to do cursive writing. Cool. Then we move a couple of months later, and that school in Ohio, they weren’t doing division yet. In Germany, the new school was already doing division. I didn’t teach myself, but I had to learn on the fly how to do division. Then, fast-forward to sixth grade. There were a couple of things that I didn’t know in sixth grade. You’re always behind the 8-ball, but at the same time it’s a sink-or-swim mentality. And if you don’t get it, well, then, you fail. I had to adapt to my surroundings fairly quickly, moving around a lot, and I think that helped me out.

What advice would you give to kids who are in a similar situation, growing up in a military lifestyle? Enjoy the process. Make a whole ton of friends. Be outgoing. Volunteer. Go to as many school functions [as you can]. Get to know your neighbors, your friends. Just enjoy and appreciate the school life of the military lifestyle, of moving around and being a military brat. I truly, truly enjoyed 100 percent of what my Dad did, and moving around a lot. Some of the best years of my life were spent abroad, in other countries, and, man, just enjoy it. Because when it’s all said and done, and it’s over, guaranteed you’re going to miss it.

Of these rules you talk about in the book, how many influence your adult life? The main rule — think before you act — that’s something I still try to live by right now. Something that my Dad instilled in my brother and I at a very early age. I tell it to my kids now. My son, he might do something dumb [and I say], “Hey, can you think before you act, please? Can you think about the consequences? Think about the decision you’re going to make.” My Dad, I’m sure he got frustrated at times with me because I was a knucklehead. And my son is identical to me as a kid, but it’s a process that my dad had to go through, and I’m going through (it) with my kids as well.

Do you have any message for the young readers out there, Charles? The message is simply, hey, guys, I hope you enjoy this book. Read this book. No, let me take that back; don’t just read the book, study the book. This book can help you out. I wasn’t always the big football star. I had trials, tribulations, my failures. I hope you can read and learn from my failures.