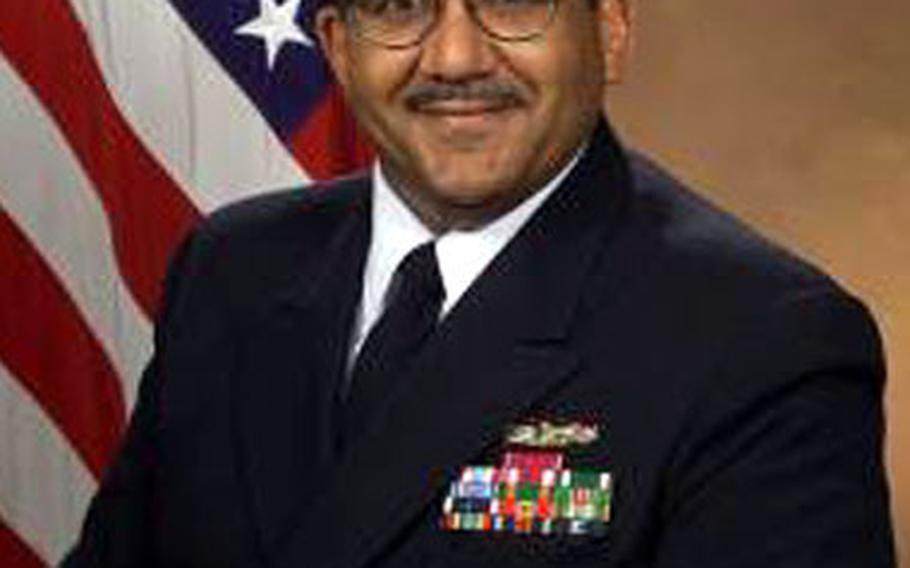 Adam Robinson is slated to become a one-star admiral today. ()

The professionalism and care he saw from the doctors, he said, struck a cord.

That early, chilling memory played a key role in Robinson&#8217;s career choice, and today, as a Navy captain, Robinson is slated to swap his eagle collar devices for those of a one-star admiral.

Robinson, commander of Yokosuka&#8217;s U.S. Naval Hospital for the past two years, has led medical centers and treated sailors and their families for 26 years.

His father was also a doctor, but being African American, he could not join the military. Instead, he worked for Veterans Affairs.

The junior Robinson knew he wanted to do national service, and medicine was appealing. He took advantage of a new scholarship program called the Armed Forces Health Professions Scholarship and attended medical school.

Once commissioned a Navy physician, Robinson was assigned here for his first duty as an independent practitioner.

&#8220;I asked for a carrier out of Norfolk,&#8221; Robinson recalled. His detailer, a former commander at Yokosuka, had a better idea.

Robinson was sent to the Yokosuka-based USS Midway.

His career has brought Robinson around the world, into classrooms as teacher and student &#8212; he used his GI Bill for a master&#8217;s degree in business administration. He has served in hospitals, medical centers and on ships.

His operational experience, combined with an MBA, primed Robinson to successfully lead a large hospital such as Yokosuka&#8217;s. He arrived after the Sept. 11 terror attacks and revitalized force health protection, established a Stork&#8217;s Nest for infant care, and supported the USS Kitty Hawk&#8216;s medical department during Operation Iraqi Freedom.

Robinson attributes his flag selection to a strong and capable staff.

He hasn&#8217;t heard when he will officially get his star or when he&#8217;ll receive orders for his next assignment.

He was commissioned in the Navy the following year.

In 1999, as commanding officer of Fleet Hospital Jacksonville, Robinson set up a hospital in Haiti during Joint Task Force Haiti. The hospital treated 25,000 Haitians in six months.

In August 2001, he assumed command of U.S. Naval Hospital, Yokosuka.