A well-preserved example of World War II's ubiquitous Jeep is on display at the Pacific War Museum in Guam. (Wyatt Olson/Stars and Stripes)

A well-preserved example of World War II's ubiquitous Jeep is on display at the Pacific War Museum in Guam. (Wyatt Olson/Stars and Stripes) 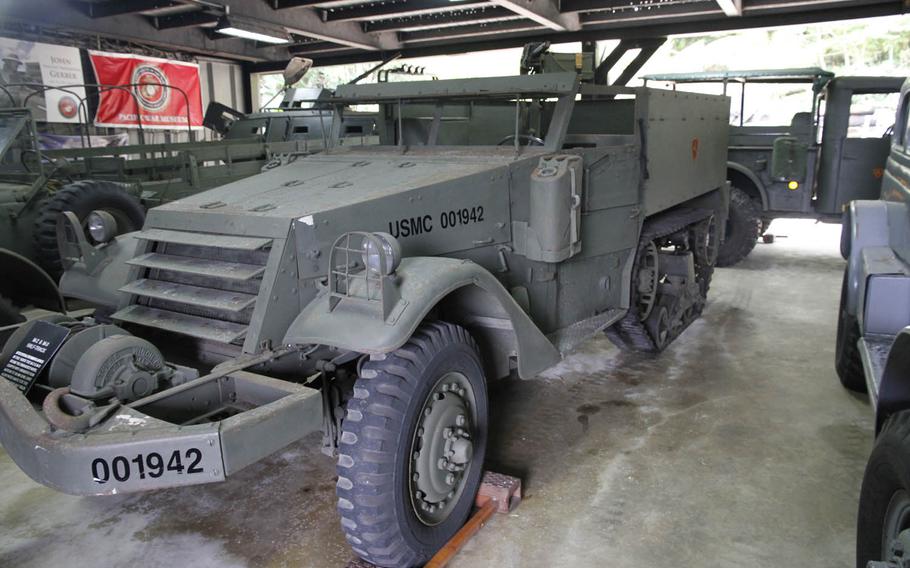 Taking a central spot at the Pacific War Museum is an M-2/M-3 half-track vehicle, which was armed with everything from mortars to 105-millimeter guns during World War II, when more than 40,000 were produced and used in the Pacific theater. (Wyatt Olson/Stars and Stripes) A Japanese Type 92 machine gun, dubbed the "woodpecker" by American troops because of its distinct sound, is among the relics displayed at the Pacific War Museum in Guam. (Wyatt Olson/Stars and Stripes) 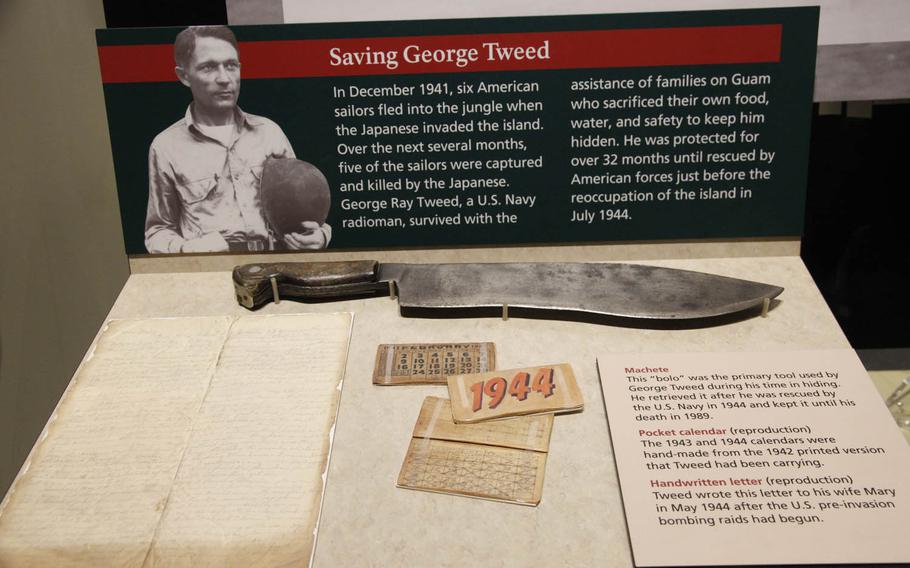 On display at the visitor center of the War in the Pacific National Historical Park Guam is the bolo knife used by George Tweed as he evaded capture by the Japanese for almost three years on Guam during World War II. (Wyatt Olson/Stars and Stripes) One of three Piti Guns points out at a bay where the Japanese expected the Allied invasion force to land during World War II. The Japanese forced locals to build the gun batteries, but they were not completed before Guam was liberated. (Wyatt Olson/Stars and Stripes) One of many concrete pillboxes built by the Japanese in preperation for the expected invasion of Allied troops to liberate Guam during World War II. The bunker is now part of the War in the Pacific National Historical Park Guam. (Wyatt Olson/Stars and Stripes) 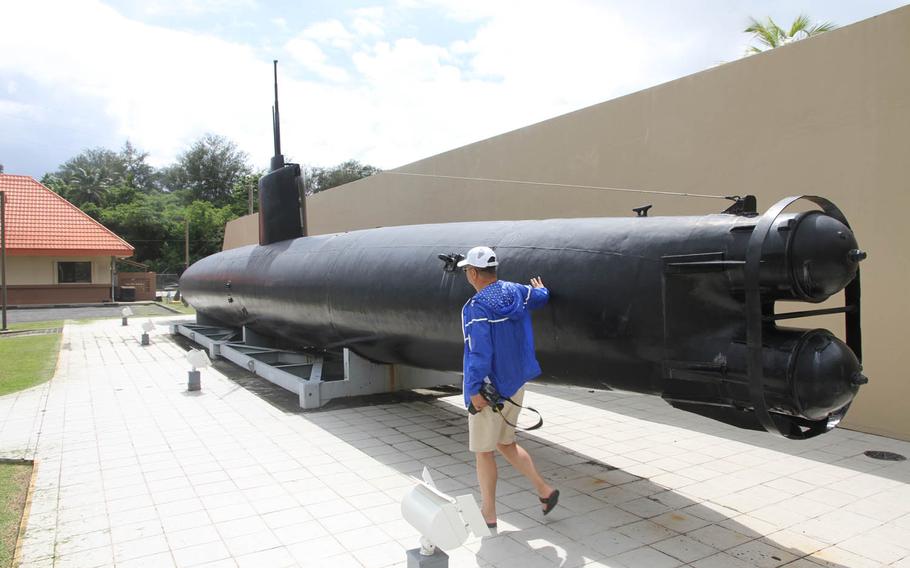 A two-man Japanese submarine is displayed in front of the visitor center at the War in the Pacific National Historical Park Guam. The 80-foot sub ran aground in Guam in August 1944, a couple weeks after the Battle of Guam ended during World War II. (Wyatt Olson/Stars and Stripes)

Guam is nirvana for any World War II history buff. There are probably more WWII relics, battle sites and photographs per square yard in the south of Guam than anywhere in the Pacific.

Within a few miles of each other along Marine Corps Drive are two museums devoted to the subject, but their ambiance and approach differ greatly.

To visit the National Park Service’s War in the Pacific National Historical Park and not see the Pacific War Museum — or vice versa — would be cheating yourself of a greater understanding of that epic war as it played out on this tiny island that the U.S. acquired in 1898 after winning the Spanish-American War.

The War in the Pacific National Park is comprised of numerous sites, some of which hold original fortifications built by the Japanese for the anticipated invasion by Allied forces to retake the island. It’s roughly a 25-mile round-trip to see all the park units, for which the Park Service recommends allowing two hours. That’s optimistic. I spent a half-day and did not get everywhere.

And the exhibits at the T. Stell Newman Visitor Center could take a half-day alone. Visitors first watch a 10-minute video about the Battle for Guam that gives an overview of how the Japanese invaded the lightly defended island in 1941 and defended against the Marine Corps landing in 1944.

The visitor center does a good job describing in words and photographs how difficult life was during that period for the native Chamorro people. The Japanese occupiers pressed them into forced labor to excavate limestone caves and build cliff-side gun emplacements.

During the months-long pre-invasion bombardment of the island by Allied forces, the Japanese forced almost 80 percent of the Chamorro population to march to inland concentration camps to prevent them from aiding their liberators. Thousands hid in the jungle to escape imprisonment, while many of those in camps were never seen again.

The Chamorro helped protect six American sailors who fled into the jungle after the Japanese takeover. Over the next five months, five of them were captured or killed, but a radioman, George Ray Tweed, survived until the Allied reoccupation with food, water and safety provided by the Chamorro. On display is Tweed’s bolo, a cutting tool similar to a machete, which he used to survive in the wild.

But the actual battle sites are the backbone of the park.

The beaches near the village of Agat had been heavily fortified by the Japanese, with two 75 mm guns, a 37 mm gun and numerous machine guns at Ga’an Point, the last stronghold to fall at Agat. The weapons killed scores of Marines and shredded landing craft. The guns were ensconced in pillboxes, some of which still stand, pitted with bullet holes.

Not to be missed are the Piti Guns atop a steep hillside trail about a football field long. Entry to the site can be tricky to find, tucked away behind a church and giant banyan tree.

Remaining in their original positions are three 14-centimeter cannons along the trail. The Chamorro were forced to build the concrete emplacements and used tree trunks as rollers to move the massive guns up the hillside. It was a huge undertaking, so big that the Japanese were not able to complete work on the Piti Guns complex before the Allied invasion. They never fired a round.

Although the forest has grown high around them, there’s a clearing in front of the last cannon on the trail, and it provides a panoramic view of Asan Beach, which they were intended to defend with their 10-mile firing range.

A much more personal collection of World War II artifacts is at the Pacific War Museum. It began as a labor of love by Marine Corps veteran John Gerber, a Vietnam War vet. Gerber was pivotal in the successful campaign to name the island’s main north-south route Marine Corps Drive.

At one point, when the name-change bill was stalled in the legislature, Gerber pulled a wheeled sign in protest from Andersen Air Force Base in the north to Naval Base Guam, about 30 miles south. The sign sits in the museum and reads in part: “This road was paved with the blood of 1548 U.S. Marines. Senators, give the Marines the honor they deserve.”

After leaving the service in 1975, Gerber began researching the history of Marines on Guam and amassing relics rom World War II and later.

He moved the collection to its present location in 2008, and two years later, he died suddenly of a heart attack. His widow now operates the museum, which is open seven days a week.

The museum is casual, and you might feel like you’re there all alone. The main room holds a half dozen large vehicles, some from World War II. Among them is a fairly pristine example of the WC 57 “Command Car,” a Dodge truck used from 1942 to 1944 for transporting Allied field officers. Then there’s an iconic Jeep, one of the roughly 360,000 made from 1941 to 1944. It was small enough to maneuver around jungle trees but had enough power and traction to make its way through the mud.

The M-29 cargo carrier was dubbed “The Weasel” and moved on steel tank tracks. The vehicle was regarded top secret and carried an explosive device inside that was to be detonated if the carrier had to be abandoned.

In two side rooms are artifacts from both Japanese and American troops from World War II, many found during the decades after war’s end. For example, there’s a rusty Japanese Type 92 machine gun on a tripod, dubbed “The Woodpecker” by American troops for its distinctive sound.

There’s a tattered Japanese flag that once flew in front of a defensive bunker. After a fierce battle, Marine Lt. Jack J. Eddie claimed the flag and kept it until his death in 1998. Eddie’s family donated the flag and all his medals — he’d been awarded the Silver Star — to the museum.

Outside the museum are two Japanese 12 centimeter guns, originally designed for shipboard use, but adapted by the Japanese for anti-aircraft and coastal defense purposes.

Looming behind the pair of guns is the foothill of Chonito Cliff, a battleground in 1944 recalled by the Marines who experienced it as the “hill of hell and heartbreaks.”

Hours: The museum/visitor center is open 9 a.m. to 4:30 p.m. every day except Christmas Day, Thanksgiving Day and New Years Day. Parks are open to the public at all times, but restrooms at Ga’an Point and Asan Beach are open only from 7 a.m. to 5 p.m.

Location: The museum/visitor center is located at the southernmost end of Route 1, also called Marine Corps Drive. A black Japanese midget submarine is displayed in front of the building. If you miss the right turn into the museum complex, the Route 1 leads into Naval Base Guam, which has restricted access. Battle sites are found throughout the surrounding area.

Directions to parks:Fonte Plateau: Site of a former Japanese naval communications center. South on Route 1, turn left onto Route 6, and drive up about 1.5 miles, park is on the right. Asan Bay Overlook is also on Route 6, about four miles from the Route 1. It’s the site of a memorial wall in honor of Chamorros and Americans who died during war.

Asan Beach: Landing site of the 3rd Marine Corps Division in the recapture of Guam, July 21, 1944. About seven miles south of airport on Route 1 on beachside, very well marked.

Piti Guns: Quarter-mile trail up cliff-side to three Japanese coastal defense guns. South from airport on Route 1 about 7.5 miles, turn left on J.M. Tuncap Street, immediately after the 76 gas station. Drive to end of street, turn right at the stop sign. Take next left onto Father Mel Street, then park under large tree next to the church social hall. Trail head is just behind hall; look for a park exhibit panel.

Apaca Point: Landing area for southern forces. Drive south on Route 1 from airport about 13 miles where it ends in front of Naval Base Guam. Turn left onto Route 2 and drive about two miles to a Y in the road. Go right on the Y to a stop sign, and park is on right across the road.

Ga’an Point: Landing area for southern forces. Drive south on Route 1 from airport about 13 miles where it ends in front of Naval Base Guam. Turn left onto Route 2 and drive about 3.5 miles, where the park is oceanside just after fire station.

Directions: South from airport on Route 1, turn left onto Route 6, and drive about a quarter mile. Museum entry is well marked on right.