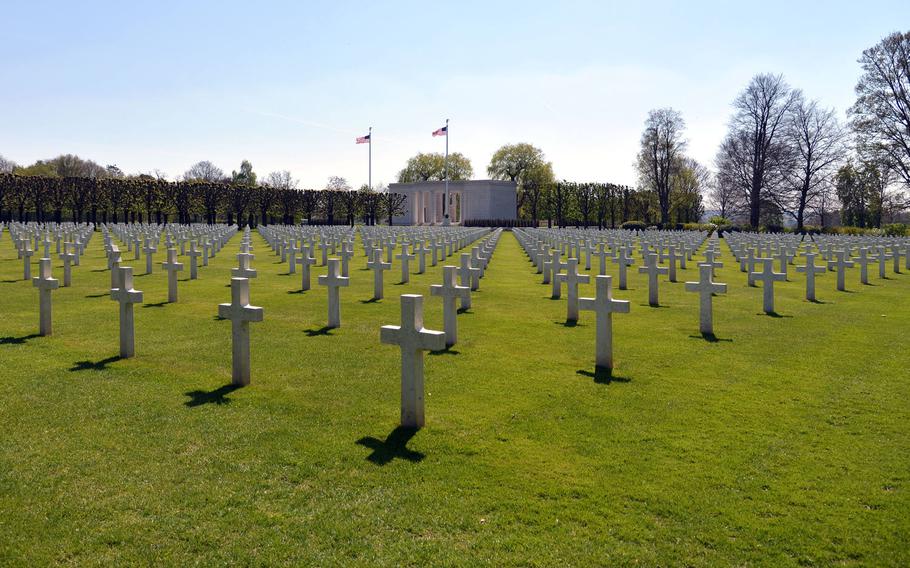 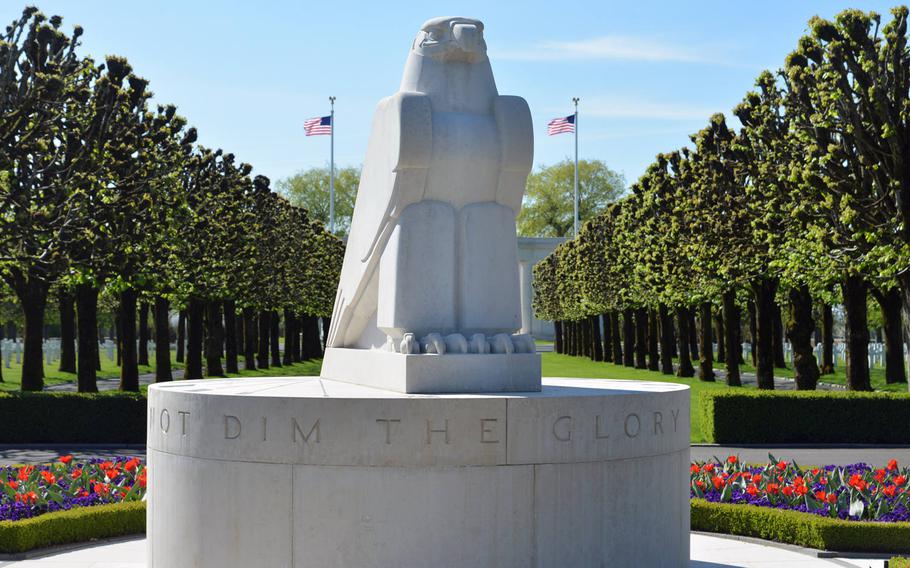 Buy Photo
An American eagle is the centerpiece of the St. Mihiel American Cemetery. The burial area is divided by trees and paths into four equal plots. Inscribed are the words of Gen. John Pershing: ''Time will not dim the glory of their deeds.'' (Michael Abrams/Stars and Stripes) 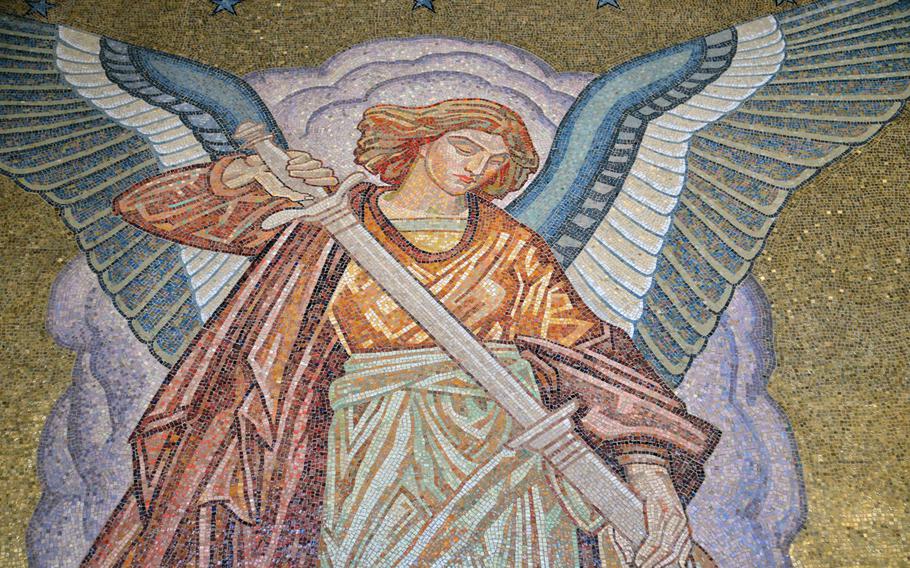 Buy Photo
An angel sheaths his sword in a mosaic inside the chapel at St. Mihiel American Cemetery. (Michael Abrams/Stars and Stripes) 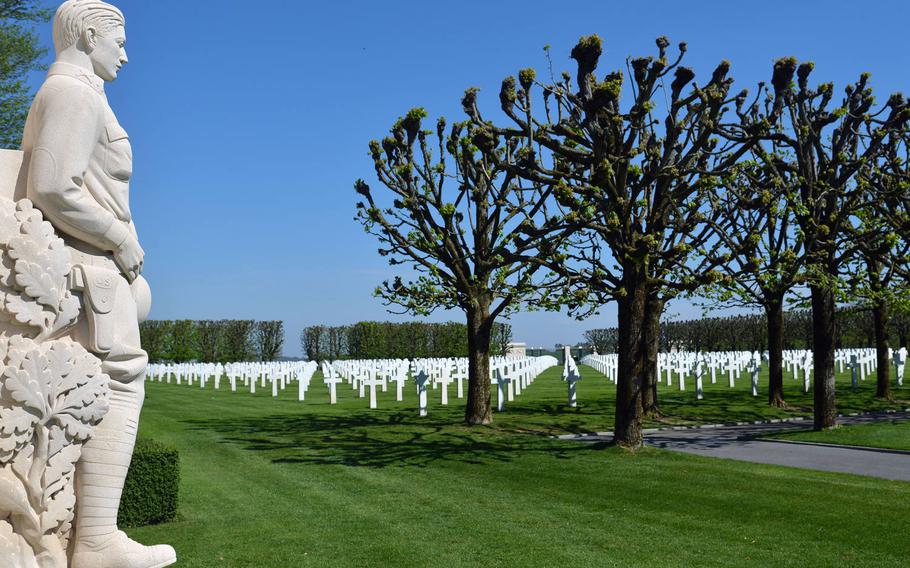 Buy Photo
A statue of a World War I soldier overlooks the graves of the 4, 153 American war dead at St. Mihiel American Cemetery. (Michael Abrams/Stars and Stripes) 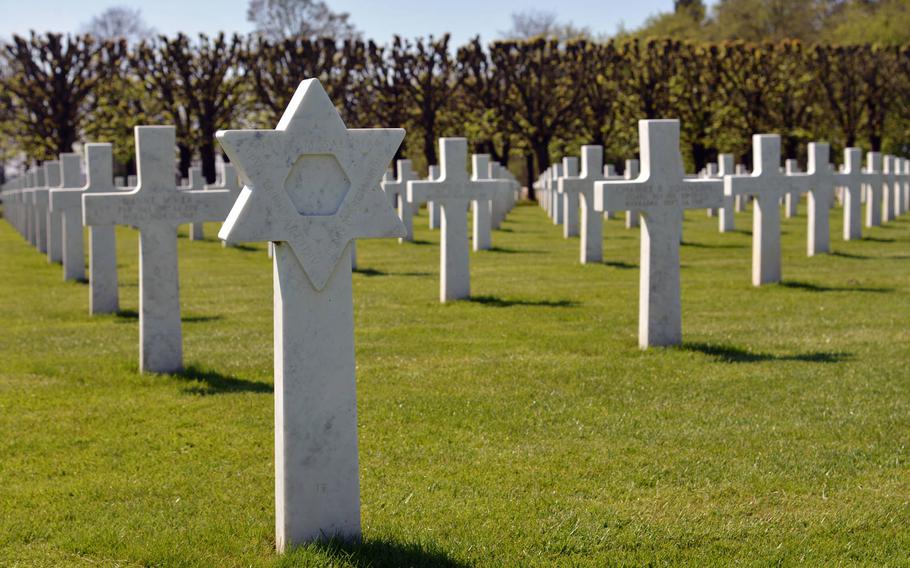 Buy Photo
A Star of David marks the grave of a Jewish soldier at St. Mihiel American Cemetery on the outskirts on Thiaucourt, France. There are 46 of them among the 4,107 Latin crosses at the cemetery. (Michael Abrams/Stars and Stripes) 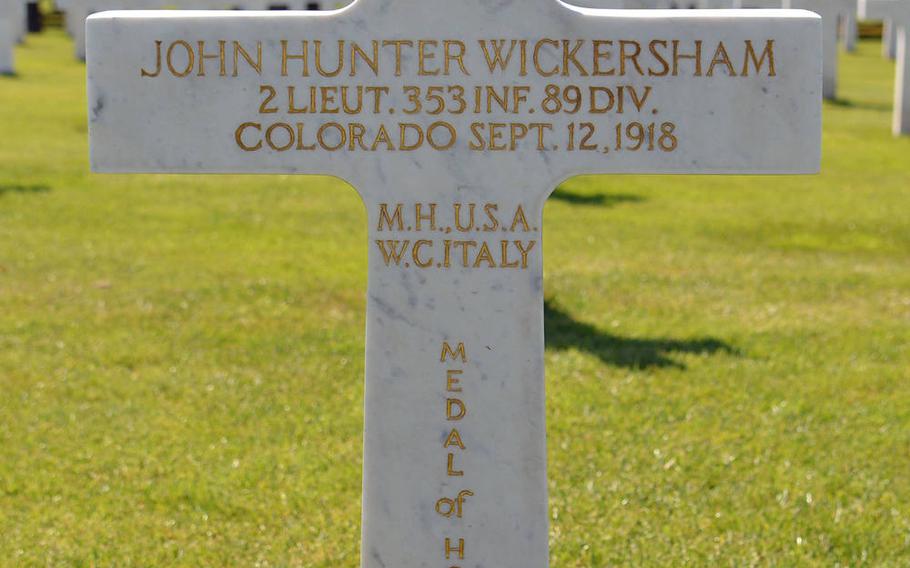 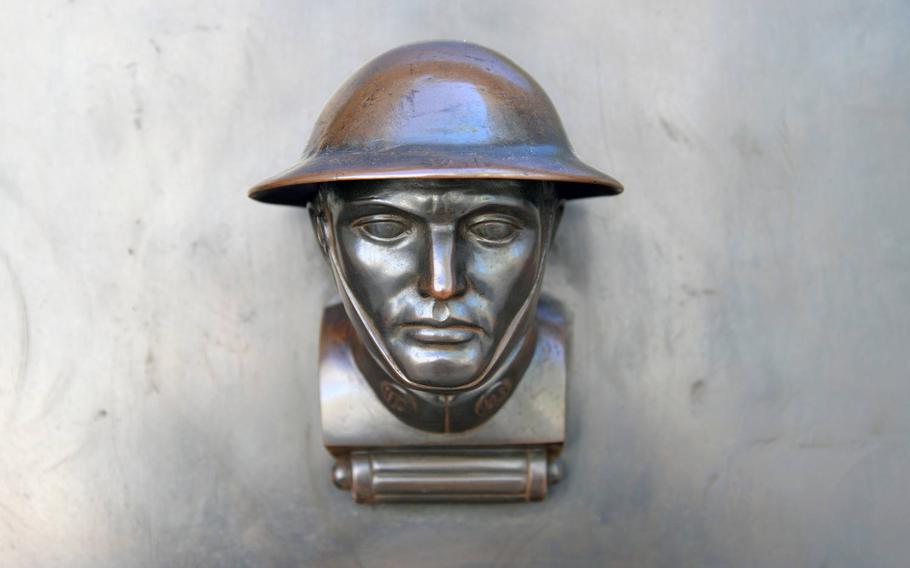 Buy Photo
The door knobs of the chapel and map room at St. Mihiel American Cemetery are the heads of soldiers wearing the distinctive helmets of World War I. (Michael Abrams/Stars and Stripes)

Row upon row they lie in the French soil, under a perfectly manicured green lawn. Each grave is marked, either with a Latin Cross or a Star of David. Most of them lost their lives not far from here, fighting in a long-ago World War I battle known as the St. Mihiel salient offensive.

A century ago, in April 1917, the United States declared war on Germany, entering what would be called the “Great War.”

American troops, known as doughboys — or Yanks, as the British called them — began arriving in France in June of that year. They didn’t fight their first battle until November, but by spring of the next year, they were in the middle of the fight, mostly supporting the French army.

In September 1918, around 300,000 troops of the U.S. 1st Army, under the command of Gen. John J. “Black Jack” Pershing and supported by French units, began the first American-led offensive of the war. Their objective: to push the Germans out of the St. Mihiel Salient, south of Verdun.

The battle began on Sept. 12, and by Sept. 16, the Americans and their allies had achieved their objective. Although casualties were much lower than expected by World War I standards, thousands still died in the fighting.

Today, 4,153 American war dead are buried at St. Mihiel American Cemetery on the outskirts of Thiaucourt.

The cemetery is one of 26 that the American Battle Monument Commission takes care of around the world.

The stone crosses and Stars of David are inscribed with the name, rank, unit, home state and date of death of the fallen. Some of the crosses read simply “Here Rests in Honored Glory an American Soldier Unknown but to God” (American Soldier is replaced with Comrade in Arms on WWII crosses). Besides the graves, a memorial structure — usually incorporating a chapel — is the centerpiece of the cemeteries.

You enter St. Mihiel through cast-iron gates adorned with the Great Seal of the United States. At right is the cemetery office, at left, the visitors’ center where you can sign a guest book.

The graves sections are divided in the middle by an expansive lawn that leads up to the memorial.

Halfway up is an American eagle sitting on a sundial. Inscribed on it are the words of Gen. Pershing: “Time will not dim the glory of their deeds.”

Pathways running east to west divide the graves in four plots. On the east end is an overlook with a sculpture of a vase. On the western end stands a statue of a doughboy overlooking the graves.

Two buildings, the chapel and the museum, make up the memorial. The chapel features a large mosaic of an angel sheathing his sword, while the museum has an oversized map of the battlefield on its center wall and the names of 282 servicemembers still missing in action on the flanking walls. Note the door handles on both buildings. They are brass heads of World War I soldiers.

Behind the memorial, you can look out over the former battlefield to the Montsec Monument, dedicated to the battle, in the distance. Walking through the grave sites one notices the variety of names inscribed on the markers. They came from all walks of life and from most of the states and territories that made up the United States. Among the names are Pvt. Don White-Eagle and Albert Ahnemann from New York, Pvt. Florentino Morales of Texas, Capt. Hugh J. O’Neill from Michigan and Pvt. Frank DeAngelo and Pvt. Abraham Saltman from Pennsylvania.

There are 46 Stars of David among the 4,107 Latin crosses at the cemetery. Marking the graves of unknowns are 117 crosses.

And one Medal of Honor recipient lies here among his comrades at St. Mihiel American Cemetery — 2nd Lt. John Hunter Wickersham was honored posthumously for his gallantry in action on Sept. 12, 1918.

The Memorial Day weekend is the perfect time to visit the cemetery and honor the Americans who gave their lives for their country nearly a century ago.

St. Mihiel American Cemetery DIRECTIONS St. Mihiel American Cemetery is at Route de Verdun, 54470 Thiaucourt, France. Take A4 toward Metz to exit 32 at Fresnes-en-Woevre and head south toward Pont-a-Mousson. The cemetery is on the right before entering Thiaucourt. GPS Coordinates: N48 57.419 E5 51.419. Medal of Honor recipient 2nd Lt. Wickersham is buried in Plot B, Row, 19, Grave 12. TIMES Open daily from 9 a.m. to 5 p.m., except Dec. 25 and Jan. 1. This year’s Memorial Day ceremony is May 28 at 4 p.m. INFORMATION Visit www.abmc.gov.