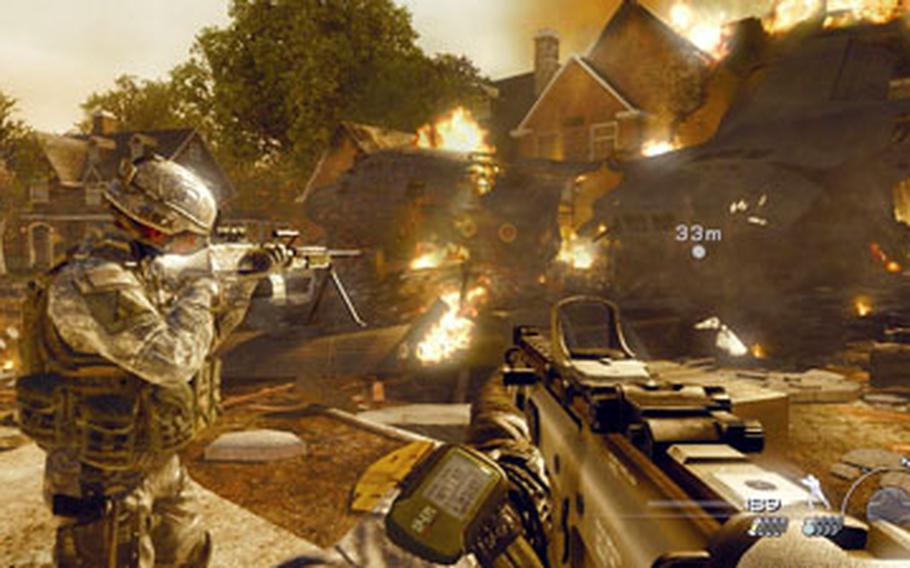 American soldiers fight their way through a neighborhood in Northern Virginia during the single-player campaign in “Call of Duty: Modern Warfare 2.” (Activision screen shots)

American soldiers fight their way through a neighborhood in Northern Virginia during the single-player campaign in “Call of Duty: Modern Warfare 2.” (Activision screen shots) “Call of Duty: Modern Warfare 2” improves on the online battles that were the hallmark of its award-winning predecessor. () According to Activision, the game’s publisher, its Nov. 10 opening-day sales of $310 million on 4.7 million units sold in the United States and Britain exceeded all other entertainment releases in history.

According to Microsoft officials, Xbox Live had more than 2 million online users simultaneously logged on for the first time during the game’s release day.

And most arresting, the game ventures past lines of morality previously avoided by video-game creators.

After playing the game, it is safe to say that the smooth game play mechanics and robust online mode of "Modern Warfare 2" will keep video-game shooter fans engaged until the very end, and then some, despite its potentially offensive nature.

The creators improved upon what many thought to be the perfect shooter, the first "Modern Warfare." Perfectly paced action and high-tech weaponry allow players to become the high-speed, low-drag killers we imagine special operation commandos to be.

The story line begins five years after its predecessor.

It brings back many of the characters and feels very familiar as you head out to dispense of another evil warmonger or two during the six-hour campaign mode.

As if the game’s fast-paced action weren’t enough to keep you entertained, the developers saw fit to let you trade lead with enemies in such locales as Rio de Janeiro, an offshore oil rig, in caves of Afghanistan and even in the suburban United States. The game play is relatively linear, but allows some flexibility except for vehicle scenes where the game is highly scripted. But, mowing down the opposition with a mini-gun mounted on a Humvee or in a helicopter is as fun as it sounds.

However, the story line isn’t always clear, and some scenes seem to have been added for shock value alone. This brings us to the controversial part of the game. In one scene, players are faced with the decision to open fire on civilians in order to gain the trust of the terrorist group they are trying to infiltrate. The mission can be skipped, but this does not stop players from having to open fire on U.S. servicemembers in the latter half of the game.

These levels have already stirred up controversy, which probably won’t do anything but drive sales even higher.

Where this game really shines is the online play. The new Spec Ops mode allows players to team up with friends online or on split screen to play through timed levels from the game and some levels from the original "Modern Warfare." Some of the levels include snowmobile racing, target engagement, stealth missions and increasingly difficult waves of enemies. This is a welcome addition, but make sure you communicate with your teammate or failure is imminent.

The multiplayer mode has been overhauled, but still retains what made "Modern Warfare" so successful. This is the most addictive mode of the game. The action is fast-paced and levels are well-designed. The perk and ranking system remain, but received a few tweaks. The more points you earn in multiplayer, the more weapons, attachments and special abilities, or perks, you earn, adding to the need to keep playing to reach the next level. The kill streak bonuses also expanded a bit. There are many more levels of kill streaks with a grand finale of getting a tactical nuke to end the competition immediately.

As a whole, the game is a great package, and shooter fans will not be disappointed, unless they are weary of shocking content. I don’t see that being a factor, as shooter fans know the genre usually has players killing people with extreme prejudice.

The campaign mode’s lack of a coherent story line and the short six-hour game play shouldn’t stop what may be the game of the year from smashing even more barriers.