Military radio had its beginnings in the days of the doughboys 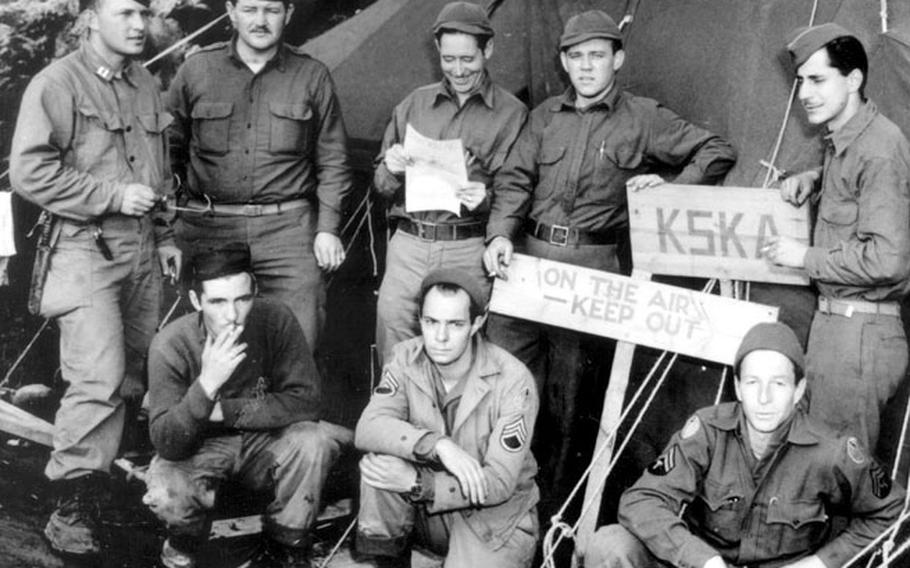 Military broadcasters were in Alaska in 1943. Amphibious Task Force 9 landed on Kiska in the Aleutian Islands on Aug. 15, 1943, and the commanding general wanted a station on the air soon after the island was retaken from the Japanese. (S&S file photo)

Military broadcasters were in Alaska in 1943. Amphibious Task Force 9 landed on Kiska in the Aleutian Islands on Aug. 15, 1943, and the commanding general wanted a station on the air soon after the island was retaken from the Japanese. (S&S file photo) 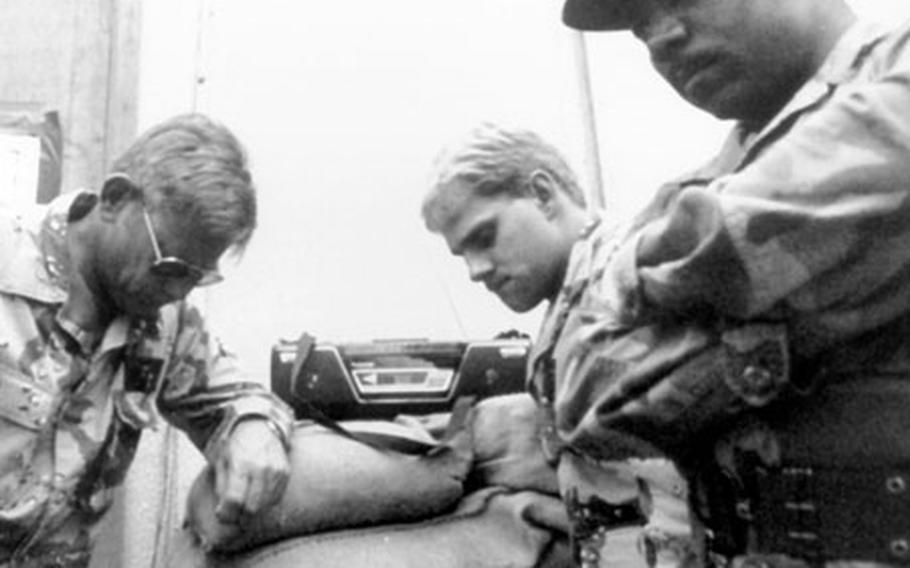 Moments after the launch of F-16C Falcons during Operation Desert Storm, airmen of the 401st Tactical Fighter Wing gather around a radio in 1991. (S&S file photo) Although American Forces Network Radio has officially been on the air for 60 years, listeners began tuning in at the end of World War I.

A Navy lieutenant in France broadcasted information and live entertainment to troops accompanying President Wilson to the 1919 Paris Peace Conference.

Radio was a novelty then, and little equipment was given to overseas military broadcasting until the United States started gearing up for World War II.

Bored soldiers in Panama and Alaska created makeshift transmitters and aired records, according to an Armed Forces Radio pamphlet. The U.S. military was unaware of the broadcasts until celebrities wrote asking how to send the stations recordings.

During the first days of the U.S. entry into World War II, Gen. Douglas MacArthur&#8217;s staff members set up military radio stations in the Philippines. Their success paved the way for the Armed Forces Radio Service.

In May 1942, the Army commissioned broadcasting executive Tom Lewis as a major and assigned him to create a viable military radio network.

Its primary goal was to keep morale high, a daunting task when the enemy already was broadcasting to Allied troops, in the personas of the infamous &#8220;Axis Sally&#8221; and &#8220;Tokyo Rose.&#8221; Playing popular American music, they tried to demoralize troops with talk about missing home.

On July 4, 1943, the Armed Forces Network went on the air, using the BBC&#8217;s London studios. With British and Canadian radio stations, it formed the Allied Expeditionary Forces Program. Gen. Dwight D. Eisenhower wanted to ensure the stations worked together and all allies were getting the same message.

By 1949, just 60 stations were operating. But broadcasters who remained in Europe with the occupying forces took on a new role. Music and information were broadcast from Bremen to Berlin &#8212; giving many Europeans their first exposure to American culture and music.

AFN brought jazz, blues, rock &#8217;n&#8217; roll and country and western to audiences starved for music. The shows were so popular that when the leftist Greens Party urged Germany to quit NATO in the 1980s and called for U.S. troops to leave, it made one exception.

When the Korean War started in 1950, AFRS leased several portable trailers and followed the troops as &#8220;Radio Vagabond.&#8221; The American Forces Korea Network was established in Seoul later that year.

While the organization changed its name to the Armed Forces Radio and Television Service in 1954, the focus remained on radio.

The American Forces Vietnam Network (AFVN) was established in 1962, during the Vietnam War, mostly for numerous military advisers there. It served as the backdrop for the 1988 movie, &#8220;Good Morning, Vietnam!&#8221;

But broadcasting to the troops as the war heated up was no day on a Hollywood set.

During the Tet Offensive, AFVN studios in Hue City were attacked. The staff fought off the Viet Cong for five days before the station manager and several others were captured. They spent five years in a North Vietnamese prisoner-of-war camp.

A mobile broadcasting van deployed to Saudi Arabia, where the American Forces Desert Network was established in 1991 and broadcast for the first time from Kuwait shortly after the Iraqi occupation ended. Since then, it has become a fixture throughout the region.

Tech. Sgt. Mark Hatfield, 36, was &#8220;out in the middle of nowhere &#8230; at a secret base detached from civilization&#8221; as a structural maintainer on F-15s, with the 4th Tactical Fighter Wing (Provisional) during Desert Storm.

About a month after he arrived, AFDN went into operation.

Someone also bought a radio for the hangar. &#8220;We cranked it because news was coming out left and right about the war,&#8221; Hatfield added.

Hatfield, now a broadcaster, said hearing news from The Associated Press at the top of every hour was important.

Today, American Forces Radio and Television Service operates about 300 radio and television outlets, serving an audience of 1.3 million listeners and viewers on every continent and U.S. Navy ship at sea.

&#8220;That&#8217;s driven by the fact that operations are not expected to be long term,&#8221; she said. Broadcasters could move in once peacekeeping operations begin, as in Bosnia, she said, where U.S. radio and TV have existed since 1995.

She said some staff members from Tokyo and Okinawa have been sent to Bosnia, where operations will continue until the last servicemember leaves.