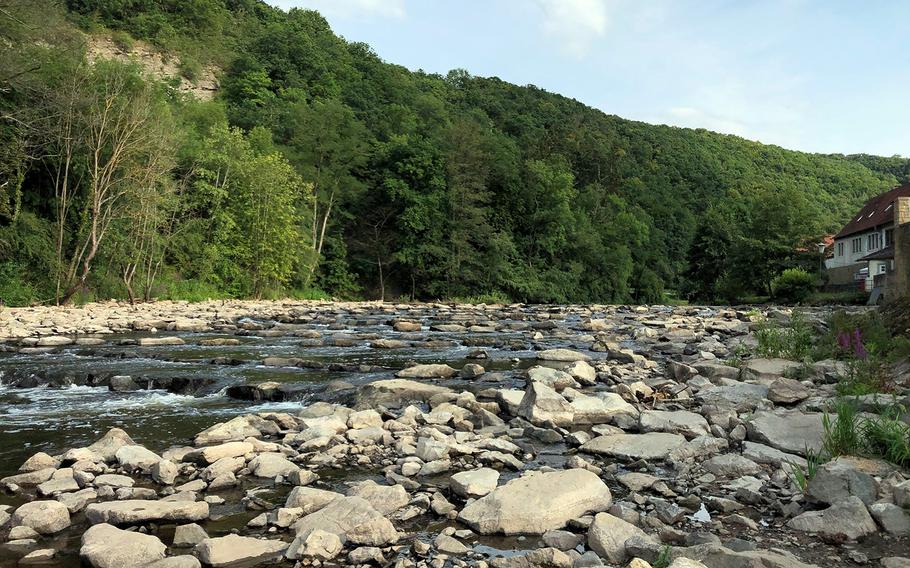 Buy Photo
The Glan River runs alongside the town of Meisenheim, Germany. (Erik Slavin/Stars and Stripes)

Buy Photo
The Glan River runs alongside the town of Meisenheim, Germany. (Erik Slavin/Stars and Stripes) 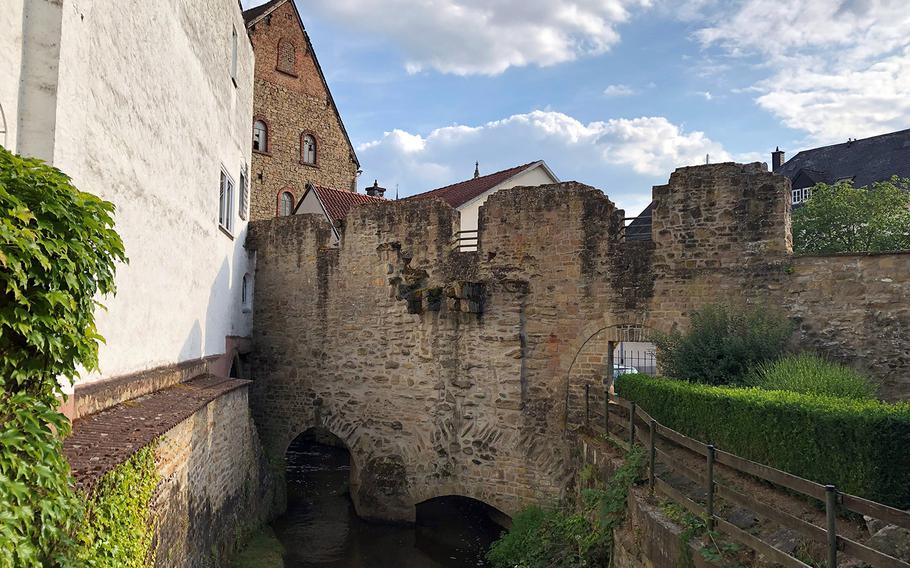 Buy Photo
Parts of Meisenheim's city walls and defense towers, first erected when the city gained its charter in 1315, now run between apartments and other buildings. (Erik Slavin/Stars and Stripes) 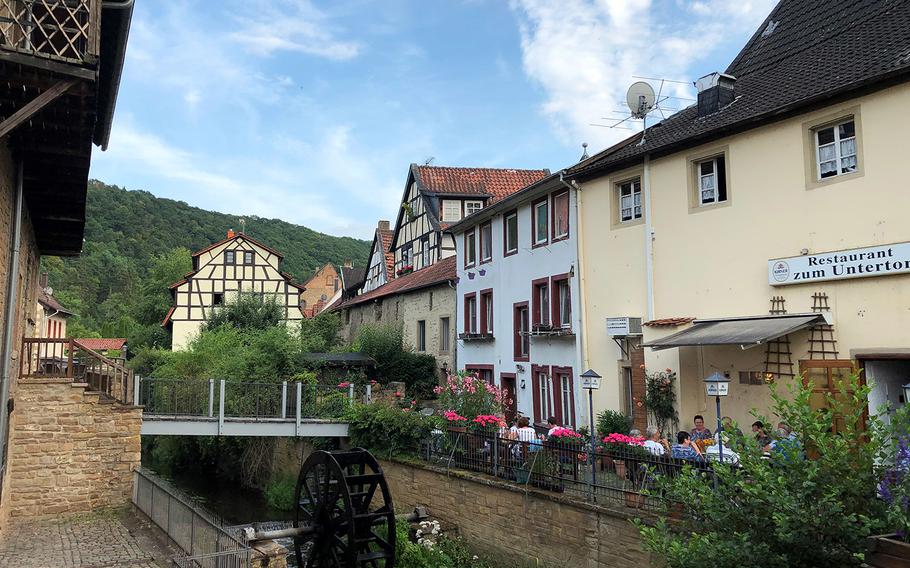 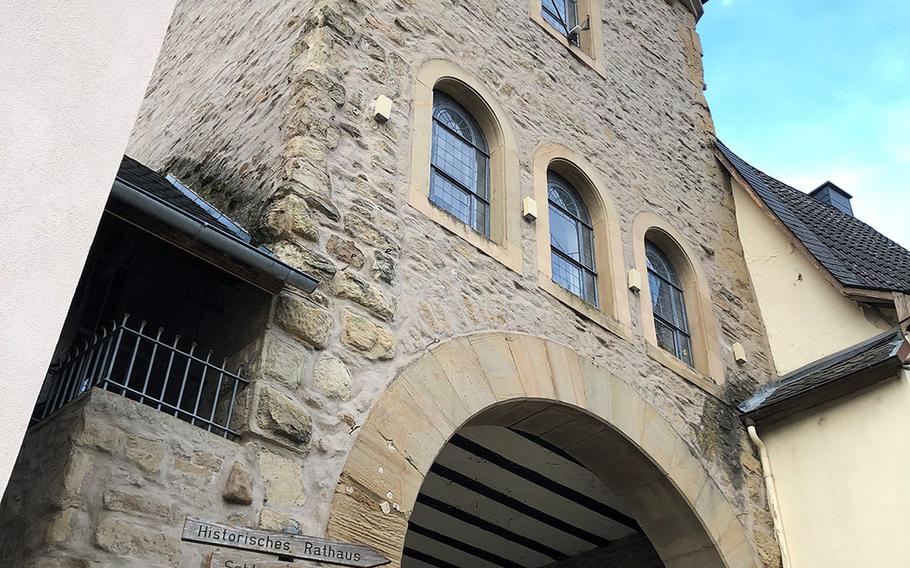 Buy Photo
The lower gate and defensive tower, first built in 1315, is the only one of three gates that was never demolished in Meisenheim, Germany. (Erik Slavin/Stars and Stripes) 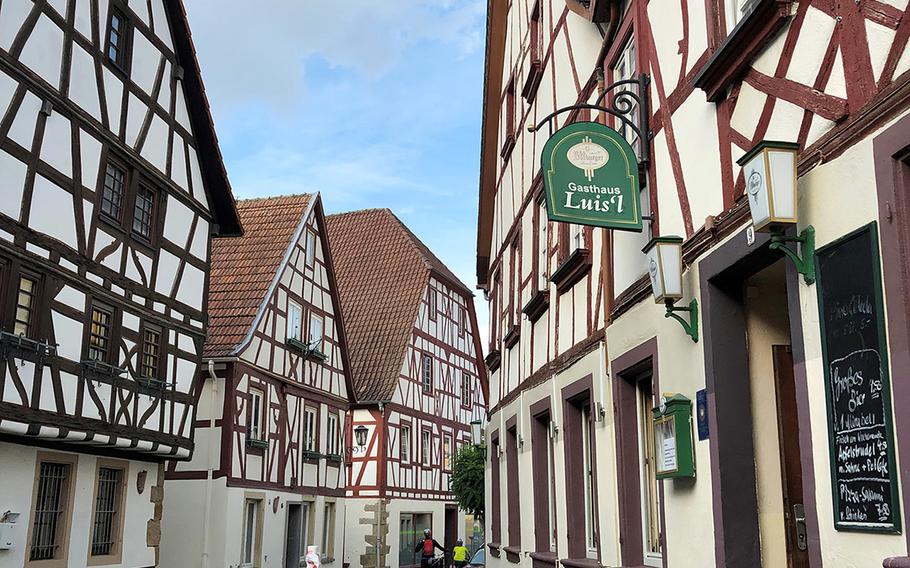 Buy Photo
Meisenheim's half-timbered buildings give the town, first chartered in 1315, the feel of an open-air museum. (Erik Slavin/Stars and Stripes )

Not far from Kaiserslautern, there’s a fairy-tale village penetrable only to those who possess a pure heart — and a GPS and some cash.

We were driving past wheat farms and forest clusters on two-lane roads when we felt the need to stop for food, and our map app found a highly rated beer garden a few miles away. I followed the directions past a junction and a truck stop, took a right around some tall trees and came upon a narrow stone bridge.

Rather than trying to squeeze my car through an arch cut into the medieval walls in front of us, I took a left, parked and tried to figure out where on Earth we’d stumbled upon.

I had never heard of Meisenheim until that moment, which surprised me given its noticeable tourism value.

The town, which is home to fewer than 3,000 people, sits near the Glan River. It received its charter in 1315, which is when those walls were first erected.

We had much of it to ourselves on a Sunday afternoon during the coronavirus pandemic and wandered streets that wouldn’t have felt out of place in Alsace. Every other building seemed to have a historical sign outside of it — from the Gothic town hall to the 16th century market hall, which became a prison for a while until resuming its status today as a place for shopping.

A little more out of the way was the former synagogue, with the Ten Commandments sign above its door. It was destroyed during Kristallnacht in 1938 but was restored in the 1980s. It’s open for tours by appointment, or at least it should be when the pandemic lockdown lifts.

It wasn’t until we arrived at the Bierengel Unterhaus that we saw where all the locals were.

The beer garden is situated along the town’s northern wall, keeping its beer protected from any potential invaders. Unfortunately, it was reservation-only, so our search for food continued.

A couple of minutes away was the Wirtshaus Luisl, a small pub with a few outdoor tables. They didn’t have much other than simple pizzas for 6 euros and suggested we go to a fancier restaurant a few steps away.

But after a day enjoying nature, having pizza and beer while looking out at Meisenheim’s half-timbered houses felt like a fine way to spend the evening.

DIRECTIONS: About 50 minutes from Kaiserslautern via the L382. Taking the A63 to Winnweiler and then following local roads is farther and takes about the same amount of time. From Baumholder, L169 and B420 will get you there in about 40 minutes.

FOOD: There are plenty of restaurants in the town. Openings and hours are subject to change due to coronavirus restrictions.

INFORMATION: The website meisenheim.de has lots of information on the town’s buildings and sights.