Mama Fela does Italian with an emphasis on seafood 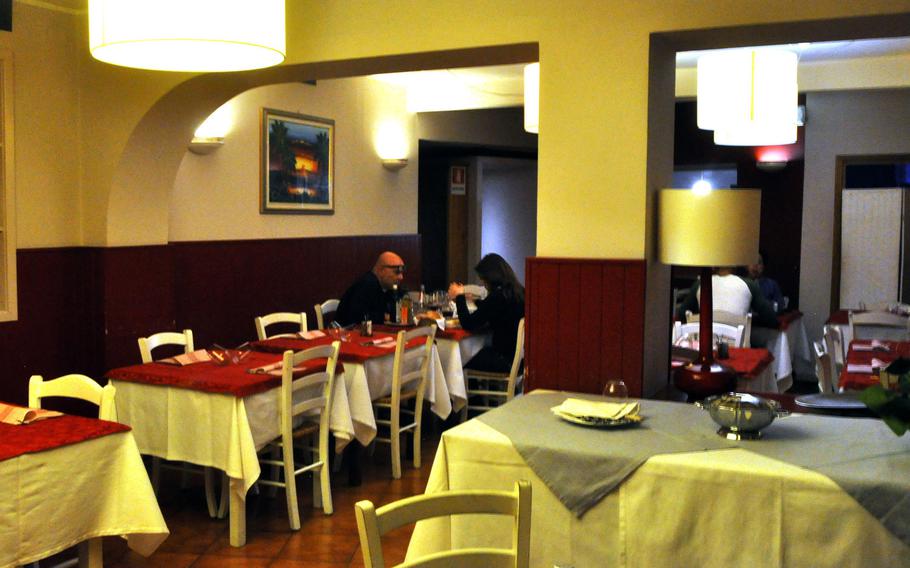 Mama Fela's main dining room seats more people than it appears from the street. And, with good weather, there's also seating outside. (Kent Harris/Stars and Stripes)

Mama Fela's main dining room seats more people than it appears from the street. And, with good weather, there's also seating outside. (Kent Harris/Stars and Stripes) 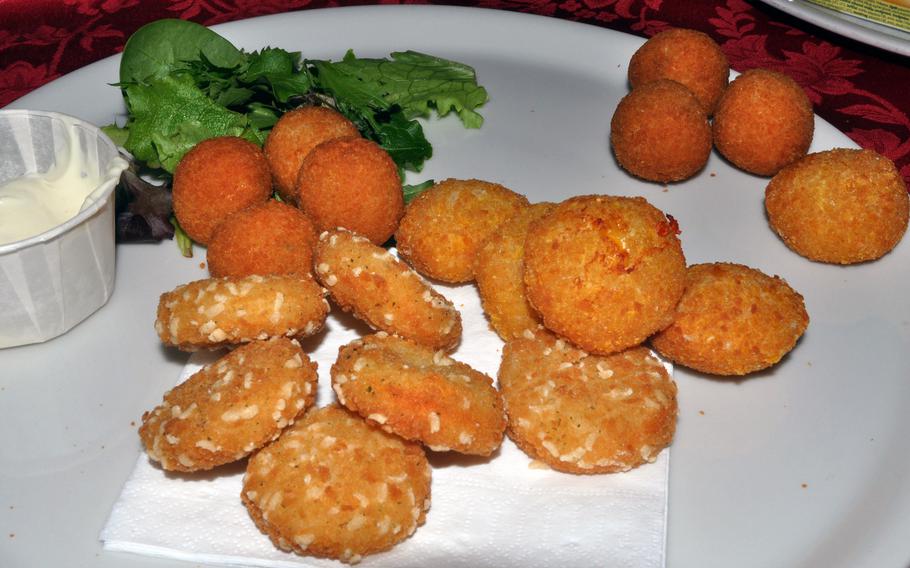 Those who like fried snacks are in luck at Mama Fela in Vigonovo, Italy. This plate had three different offerings: fried cheese, fried cheese and hot peppers and fried olives. (Kent Harris/Stars and Stripes) 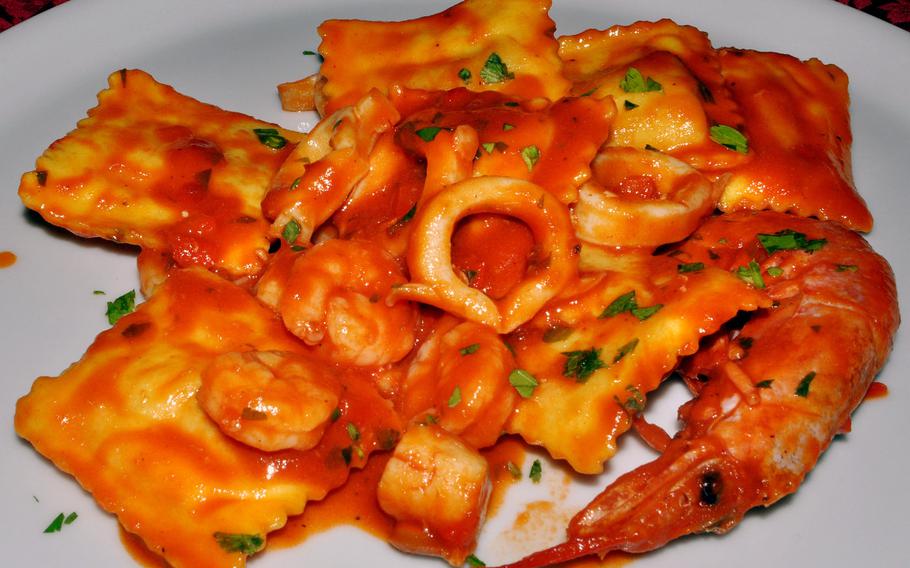 Seafood is a feature of dishes at Mama Fela. ''Ravioli of the sea'' featured seafood both in and on the raviolis. (Kent Harris/Stars and Stripes) 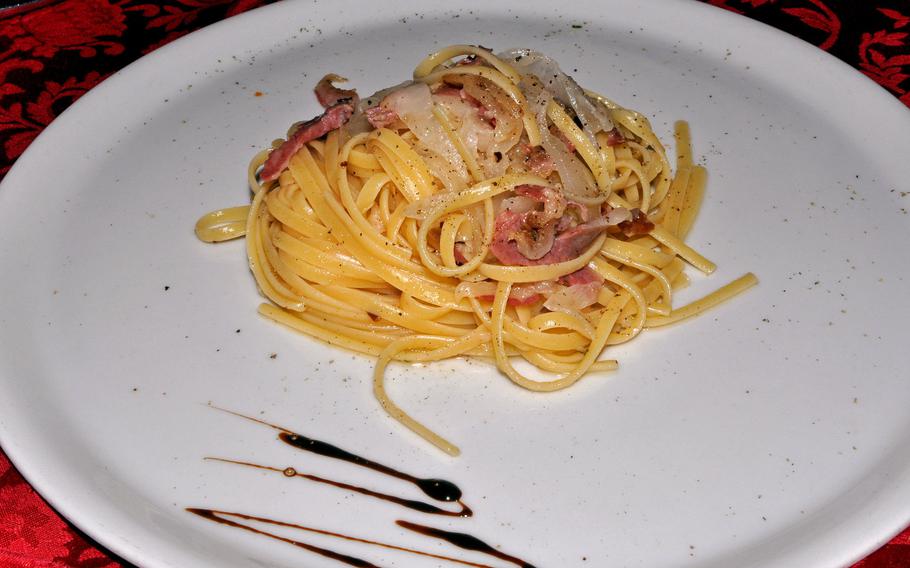 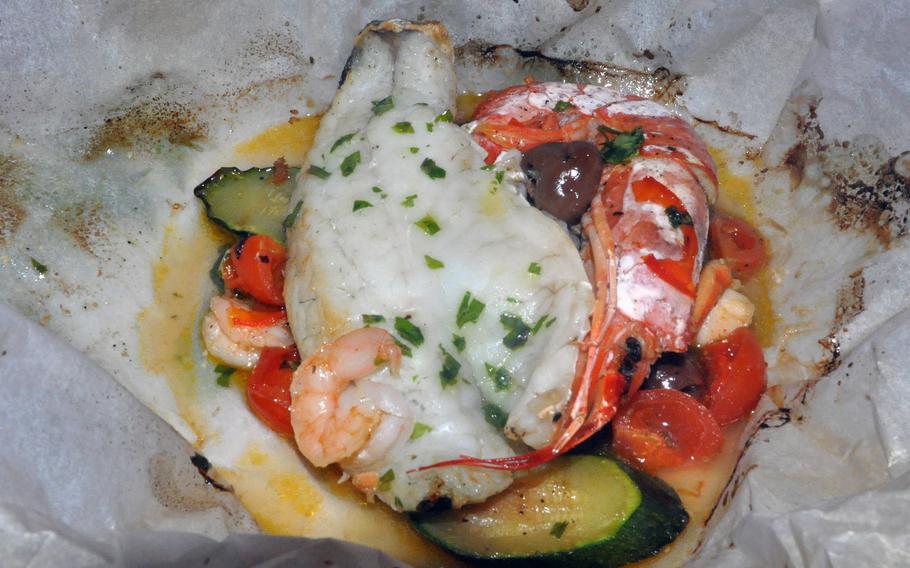 This dish at Mama Fela in Vigonovo, Italy, could roughly be translated in English as ''bass in a bag.'' But it tastes a lot better than the name would imply. The fish and vegetables were cooked to perfection inside their paper container. (Kent Harris/Stars and Stripes) 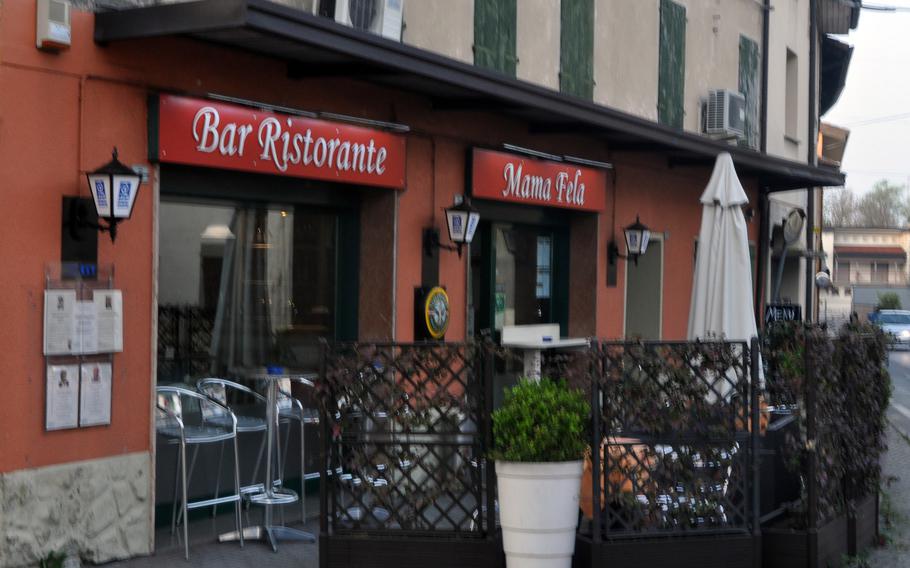 Mama Fela is located on a busy street in Vigonovo, Italy, that hundreds of American pass by every day on their way to and from work at Aviano Air Base. (Kent Harris/Stars and Stripes)

The hours are long — the restaurant is open in the mornings, too.

“This is Italy,” Derovere says with a smile. “You want to own a restaurant, you work.”

The restaurant is en route to Aviano Air Base for many Americans. Mama Fela, which offers a variety of Italian fare with specialties centered on meat and fish, does have American customers, but Derovere had hoped to have more.

The restaurant has been open for about five years. At one point, Derovere offered a menu featuring American-style breakfast — a rarity in this part of Italy outside the base food court. There wasn’t enough business to support it.

Lunch and dinner appear to be more viable. Lunch features two fixed-menu options that Berroa recites. If your Italian’s not that good, ask for it in Spanish. Berroa is from the Dominican Republic, where Spanish is the official language.

The dinner menu offers a handful of appetizer options, including one dish featuring swordfish, walnuts, greens and tomatoes and another with octopus and potatoes. Or try a fried snack or 10. Diners can choose from fried cheese, olives, hot peppers or a combination.

First courses include the most common Italian dishes, such as pasta with ragu or tomato sauce, as well as some more adventursome selections: linguine with bacon, truffle sauce and pepper or seafood-filled ravioli with squid rings, scallops and shrimp in the sauce.

Second course options also range from the standard — sliced beef or chicken — to the more unusual: bass and vegetables cooked in a bag or fondue for two.

Derovere said seafood fans should stop by on a Friday, Saturday or Sunday night, when giant seafood platters designed for two people go for about 37 euros. (That price is quite a bit more than the standard first- or second-course offerings.) Barbecued chicken is a specialty on Tuesday nights.

Directions: Address: Via Brigata Osoppo 5, Vigonovo. Heading from Aviano to Sacile, the restaurant is located on the left a block from the traffic circle next to the church. The easiest place to park is on the city lot in front of the pharmacy.

Reservations: Not necessary, but they do cater special occasions.

Menu: Meat and seafood specialties. In Italian only. The bartender speaks some English.