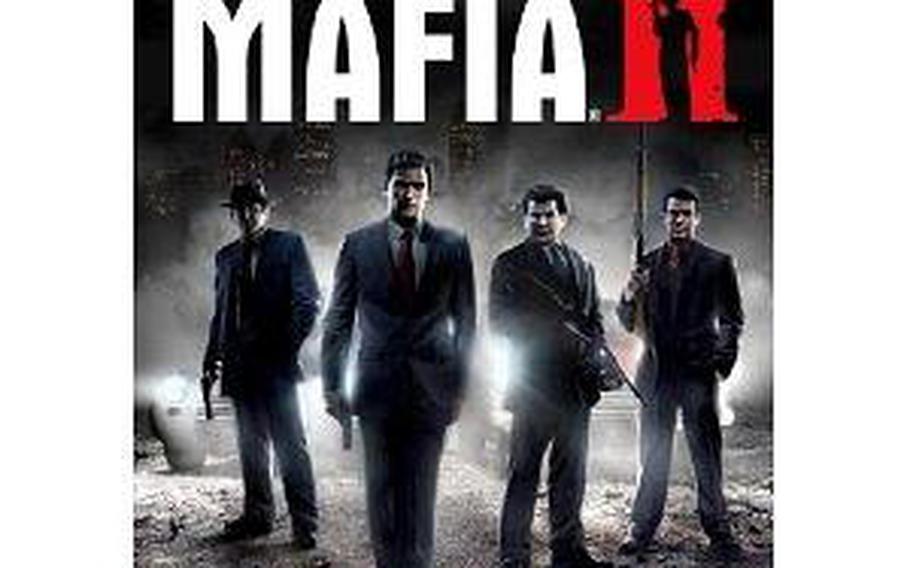 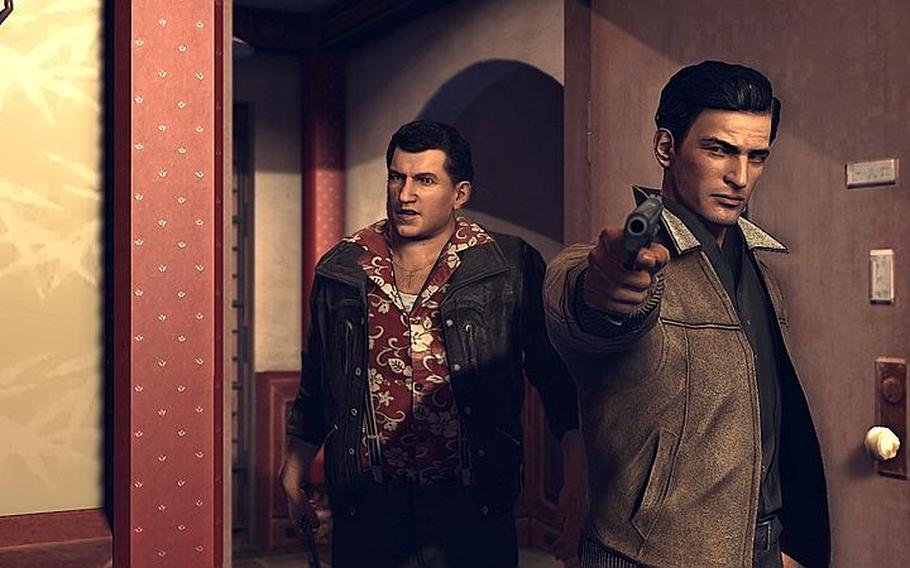 Vito, right, and his pal Joe are a couple of thugs looking for trouble in “Mafia II.” (2K Games)

I now know what makes a mobster: road rage.

If you buy “Mafia II,” you probably expect a little mayhem. But you probably don’t expect to spend a huge percentage of your time in traffic. Driving back and forth across town. Moving at low speeds in dumpy cars. Stopped at red lights. Boxed in by pokey drivers. It’s enough to make you want to whack a rival gangster.

And there are plenty of opportunities to do just that in the M-rated crime saga from 2K games.

You play as Vito Scaletta, who emigrated from Sicily as a child and fell into a life of petty crime on the streets of Empire Bay, a stand-in for New York City. After a brush with the law, Vito is “encouraged” to enlist in the Army.

The first playable mission takes place during Operation Husky, the Allied invasion of Sicily in 1943. Unfortunately, setting the first mission in territory so familiar to shooter fans only serves to highlight the game’s control issues. Gamers familiar with military games will find the movement, cover and aiming controls can be stiff and inefficient. This rarely makes a big difference in the game play but it does get irritating.

After returning to Empire Bay with war wounds, you quickly settle into your old, bad ways. You start out by shaking down workers at the local dockyard and progress to stealing cars, jewelry and gasoline ration stamps. The stamp caper ends up landing you in prison for six years. When you’re sprung, it’s 1951 and everything is looking up for a young thug hoping to make it big in gangland.

The storyline — which unfolds in an excellent collection of cinematics — pushes you deeper into gang politics and rivalries, which often turn deadly. The plot is very linear even though the game is wrapped in an open-world veneer. You can steal a few extra cars, buy some extra clothes, eat a hotdog and get your shoes shined, but there’s really little to do in the 10 square miles of Empire Bay that are open to you. You have to wonder why the developers felt compelled to create such a huge city — and force you to spend hours driving around in it — when there’s so little of interest to do.

But the lowlife characters, endless commutes and stiff controls weren’t my only gripes.

The artificial intelligence can be pretty bad. Police seem to have very short attention spans unless perseverance is demanded by a specific mission’s script. Rival mobsters rarely think about self-preservation in gun battles, so they rarely present much challenge if you remember to use cover.

In addition, some of the details aren’t quite right. When Vito turns on a light or faucet, he apparently uses Jedi powers because his hands don’t move. And the game is loaded with anachronisms, such as Playboy magazine, Jersey barriers, songs from the late 1950s and catchphrases that didn’t pop up until later.

Despite my litany of gripes, much of “Mafia II” is actually very well designed.

The missions themselves are interesting and full of action and thrills.

The voice acting — though frequently distasteful — is very good.

The graphics are, in most cases, excellent. The environments are filled with detail and texture that make them feel genuine. Having spent a lot of time in rundown industrial cities in the Northeast, I felt right at home in Empire Bay. However, the character renderings range from exceptional to unpolished, like the graphic artists ran out of time before completing some scenes.

In the end, I believe the “Mafia II” experience can be boiled down to one scene.

During one mission in the middle of the game, Vito must slog through a sewer. He might accomplish something interesting and exciting, but he’s still plastered with some unpleasant ... stuff.