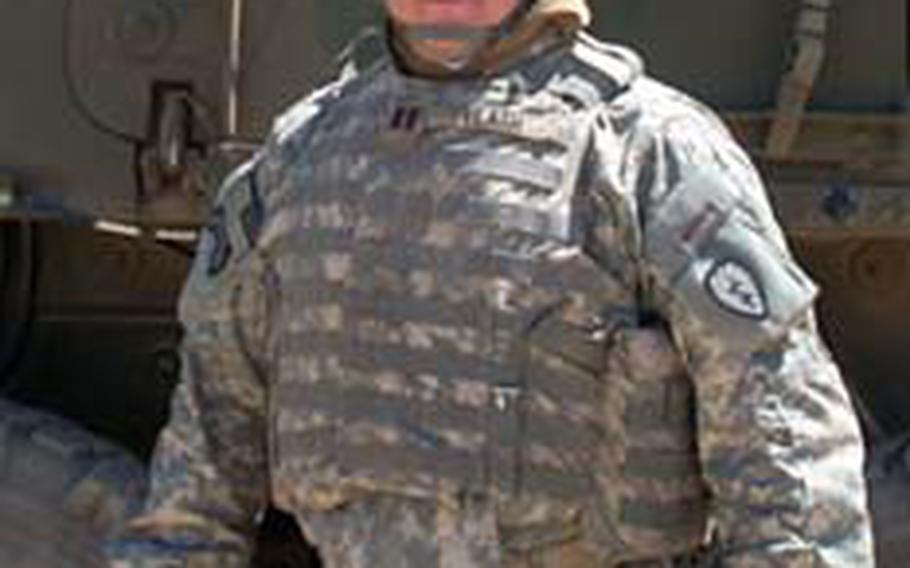 Army Capt. Logan Veath and members of his Stryker company were setting up concrete barriers to quell insurgent attacks in the Sadr City section of Baghdad when they were caught in a maelstrom of enemy fire and roadside bombs.

Veath and his men, members of his Hawaii-based 1st Battalion, 14th Infantry Regiment, 2nd Stryker Brigade Combat Team, 25th Infantry Division, along with a tank platoon, were working around the clock to place the barriers.

"We had just put up our 60th barrier and all of a sudden we heard a big explosion," Veath said.

An M1 Abrams tank had set off an explosively formed penetrator, injuring a specialist inside, Veath said. He and Sgt. 1st Class Horace Locklear raced to the tank on foot to help the injured soldier when they were rocked by a second explosion.

"It was completely engulfed in flames," Veath said of the armored vehicle. "The insurgents started firing AK-47s, RPGs (rocket-propelled grenades) and machine guns. They were in buildings and they were moving between buildings.

"I started running toward [the Stryker]. I prayed that none of my men were wounded and injured and asked that they not burn up. I decided I was going to enter the burning Stryker."

As Veath approached the burning vehicle, he saw his gunner, Spc. Andrew Howard, run out of a hatch on fire.

"The screams of a man on fire will haunt you," Veath said. "His arms were on fire. His back was on fire."

Howard was hysterical and he was running right at the insurgents&#8217; positions. Veath ran him down, tossed him over a small fence and rolled him in the dirt to extinguish the flames.

What seemed like an eternity to put out the fire on Howard probably took just 30 seconds, he added. And when he picked Howard up to carry him, the young specialist&#8217;s belt and pants ripped. He saw that Howard&#8217;s back was pretty badly burned. He carried the injured soldier another 15 yards as bullets whizzed by.

Howard suffered burns to about 15 percent of his body.

Veath then ran with Howard to seek cover in another Stryker as he fired at suspected insurgent positions. He said he could see &#8212; in a scene like something out of an action flick &#8212; bullets ricocheting off the dirt nearby.

As medics tended to Howard, Veath and his men battled it out with the insurgents in a lengthy firefight. Pulling back wasn&#8217;t an option because they couldn&#8217;t let important information in the damaged Stryker fall into enemy hands, he said.

The captain&#8217;s actions on April 29, 2008, earned him a Bronze Star Medal with "V" device. Army officials had recommended him for a Silver Star.

When asked whether he believes he deserved the Silver Star, Veath just shrugged and said saving his soldiers is the important thing.

"It is what it is. Would I have loved to get a Silver Star? Yes, I would, but I&#8217;m more touched because I took care of my soldiers," Veath said. "I received an e-mail from Specialist Howard&#8217;s dad. That e-mail was the most touching thing I ever received. Taking care of my men is the biggest thing."