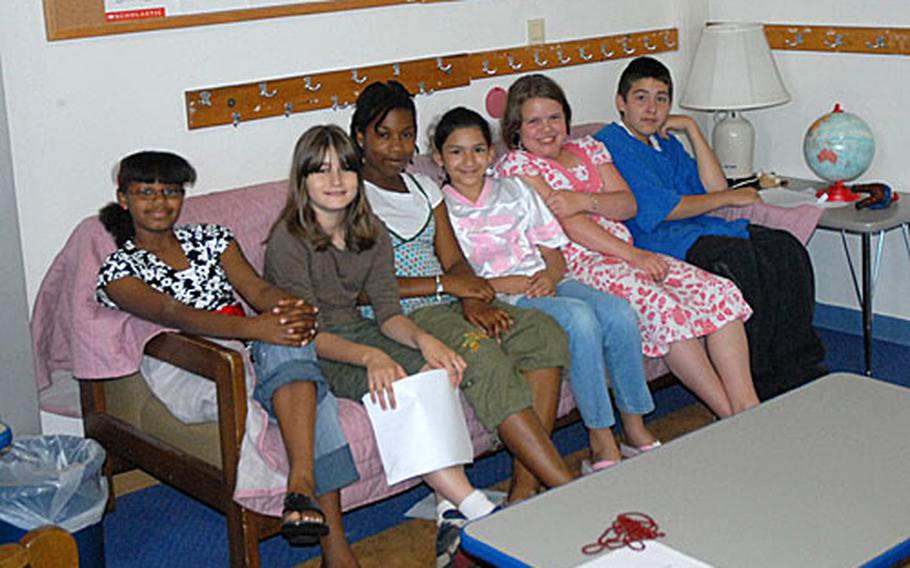 Six members of the Reading 180 class at Würzburg Elementary School in Germany gather to discuss letters to the editor of the Stars and Stripes that they had written as a school assignment. The students are, from left: Alexis Colbert, 11; Kelli O&#39;berry, 11; Nylah Stroud, 11; Juliet Trevino, 10; Hanna Teldenhof, 10; and Chris Bailey, 11. (Mark St.Clair / S&S)

There was just one more day of school, but the future veterinarian, foster mom and guitar-playing Marine of the Reading 180 class at W&#252;rzburg Elementary School had other matters on their minds.

A few weeks before, their teacher, Michelle Winter, had given them an assignment: write a letter to the editor of Stars and Stripes. They could choose their own topic.

Out of the 10 letters written, half were about the closing of W&#252;rzburg&#8217;s Leighton Barracks. Others were about expired food at the commissary, abandoned pets and an 11-year-old&#8217;s take on the differences between the United States and Germany.

The class had already lost one of its 11 members, what with families moving and the 2008 closure looming. But the remaining fourth- and fifth-graders had no reservations about making their voices heard.

Hanna, joined by classmates Alexis Colbert, Kelli O&#8217;berry, Nylah Stroud and Chris Bailey, all 11, and Juliet Trevino, 10, talked about their letters on that last day of school.

&#8220;Leighton Barracks is beautiful because there are flowers, like tulips and daffodils, cherry trees, and similar nice touches.

Kelli, the future guitar-playing Marine, said of the letter, &#8220;At first I just wanted to get it over with, but in the middle I thought it was fun.&#8221;

Having just returned from the United States, she wrote about how Germany&#8217;s Wal-Marts don&#8217;t measure up to those in the States, and how it&#8217;s easier to go fishing there, too.

Hanna wrote of her family&#8217;s attempt to adopt a dog. Because of previous problems with Americans leaving their pets behind when they moved, employees at the German pound wouldn&#8217;t let them.

&#8220;Some people are also leaving their pets in their house or outdoors after PCSing. Pets can starve to death or get hit by a car if their owners have abandoned them. It makes me feel sad that poor innocent animals are dying because their owners aren&#8217;t caring for them,&#8221; Hanna wrote, saying in the interview she was &#8220;shocked&#8221; to hear of people mistreating their animals and sad that she couldn&#8217;t adopt a pet.

Alexis, who already has dogs, wrote about the recent stateside pet food pandemic, even including a recipe for dog food in her letter.

Two things all the students shared was frankness in their writing and excitement about sharing their opinions.

The Reading 180 class, which also has elements of language arts, science and social studies, has opened her students&#8217; eyes, said Winter, a Department of Defense Dependents Schools teacher for 17 years.

Perhaps it&#8217;s also increased their desire to write. Their lettters certainly seem to say so.