In bonsai, the Japanese art of growing tiny trees in small pots, a plant’s growth is slowed by repeated trimmings of roots, branches and foliage, especially during the vigorous spring growing season. With proper care, some bonsai trees can live for hundreds of years. (Jennifer H. Svan / S&S)

In bonsai, the Japanese art of growing tiny trees in small pots, a plant’s growth is slowed by repeated trimmings of roots, branches and foliage, especially during the vigorous spring growing season. With proper care, some bonsai trees can live for hundreds of years. (Jennifer H. Svan / S&S) Satoru Yamauchi has taught bonsai at Misawa Air Base, Japan, for about 10 years. He advises his students on everything from pruning techniques to caring for the trees. (Jennifer H. Svan / S&S) 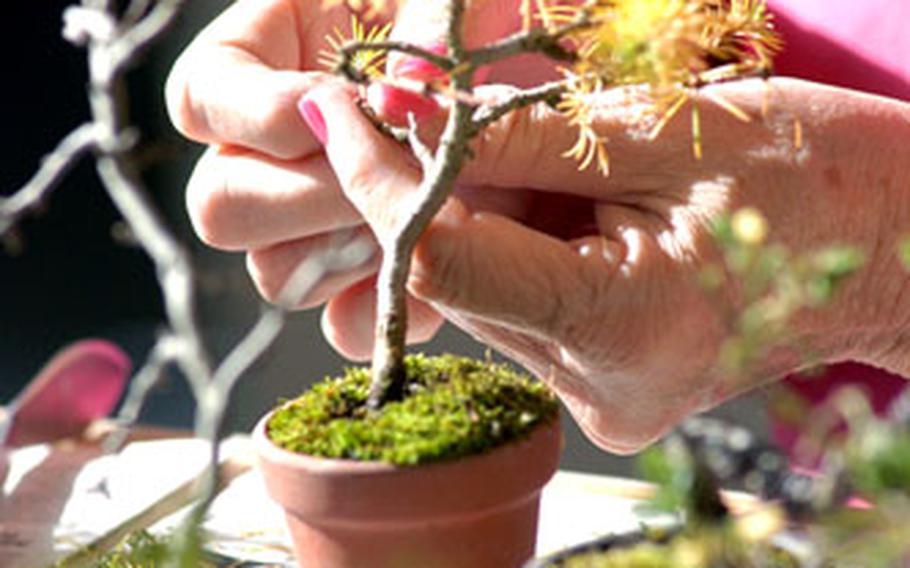 Satoru Yamauchi loves his trees like pets. But his are no ordinary trees. They&#8217;re leafy dwarfs, some no taller than a soda can, a miniature version of what nature intended.

Two Saturdays a month, the vocational teacher from Hirosaki in northern Japan drives more than four hours round-trip to teach students at Misawa Air Base the Japanese art of bonsai.

In bonsai, a devoted regimen of trimming roots, pruning branches, pinching off new growth, repotting and watering and fertilizing the soil just right can yield the seemingly impossible: A tree that might normally tower above humans in the outdoors flourishing in a palm-sized pot.

Bonsai plants may be cultivated from small seedlings or tree cuttings; they usually range in height from 2 inches to about 3 feet. A bonsai artist shapes a tree naturally or wraps wire around the branches and trunk to mold the tree into numerous aesthetic styles, such as those symbolic of a cascading waterfall or wind-blown mountainside.

&#8220;Some people say it is cruel, but what I tell them is that it is like training, just like the way you train your pets,&#8221; Yamauchi said of the wire-shaping practice.

With proper care, a bonsai can live for hundreds of years. From his collection of an estimated 150 bonsai, Yamauchi&#8217;s favorite is a Japanese black pine, a tree he has cultivated for more than 20 years.

Azalea, with its beautiful flowers, and juniper are among the easier bonsai trees to grow, he said. Americans, the teacher added, like Japanese maple for its unique red leaves.

Yamauchi has taught at Misawa for about 10 years. He advises his students on everything from pruning techniques to how to care for their tiny trees. He provides the soil, pots and wire and preaches the importance of watering the plants up to three times a day during summer, and less during winter&#8217;s dormant growing season.

Among Yamauchi&#8217;s dozen students, some are beginners, but others, like Jenni Johnson, are avid bonsai enthusiasts. Johnson pruned her first bonsai in 1979 while living in Biloxi, Miss., quickly becoming hooked on the pursuit of &#8220;re-creating nature in miniature.&#8221;

Brett James, another of Yamauchi&#8217;s Misawa students, is new to bonsai, taking his first class in April. A landscape artist, James said: &#8220;I never dealt with these itty, bitty plants before. It&#8217;s a lot of fun to take something very tiny &#8230; and manicure it into often a very beautiful shape.&#8221;