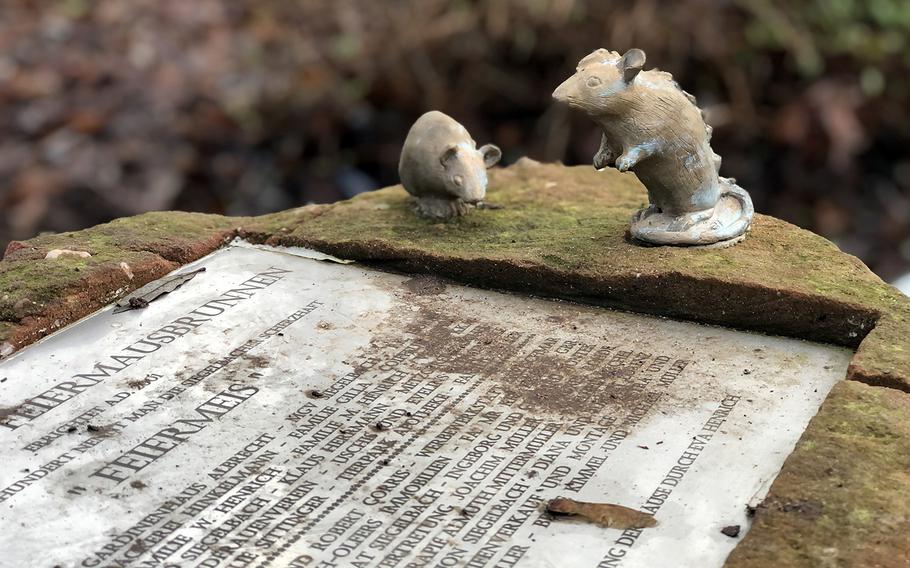 Buy Photo
A mouse statue at the entrance to Siegelbach Park in Kaiserslautern, Germany. Siegelbach's people have been nicknamed ''party mice'' since the 19th century. (Brian Ferguson/Stars and Stripes)

Buy Photo
A mouse statue at the entrance to Siegelbach Park in Kaiserslautern, Germany. Siegelbach's people have been nicknamed ''party mice'' since the 19th century. (Brian Ferguson/Stars and Stripes) 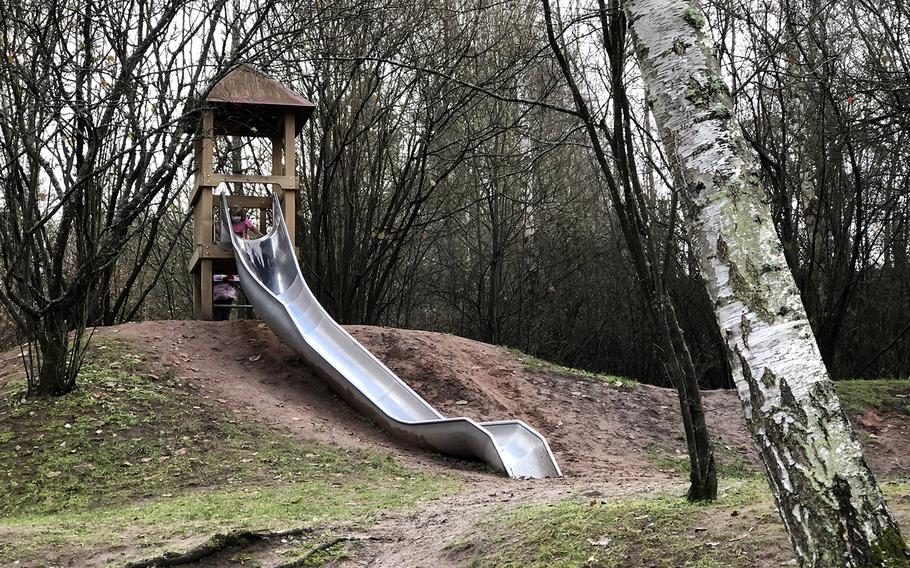 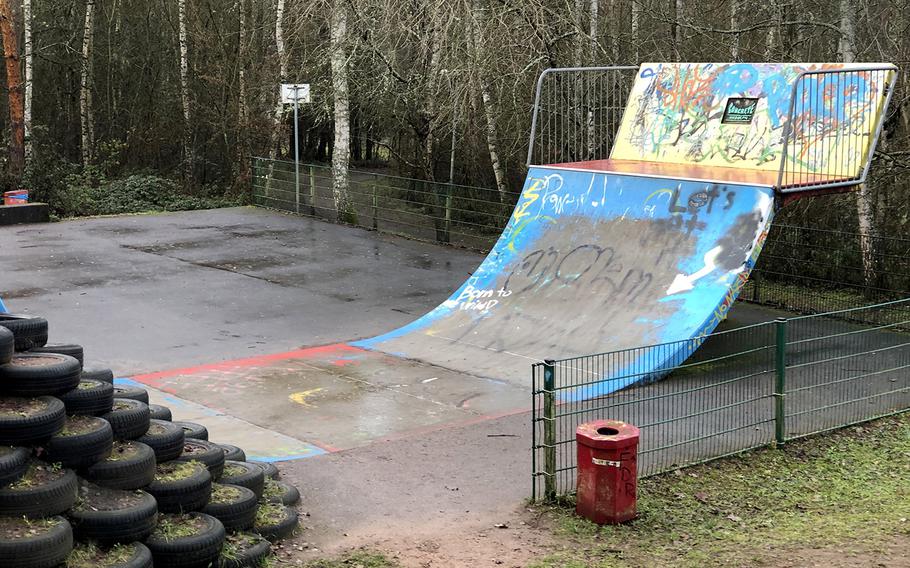 Buy Photo
There is a skate ramp at Siegelbach Park in Kaiserslautern, Germany. The park also has a duck pond and playground. (Brian Ferguson/Stars and Stripes) 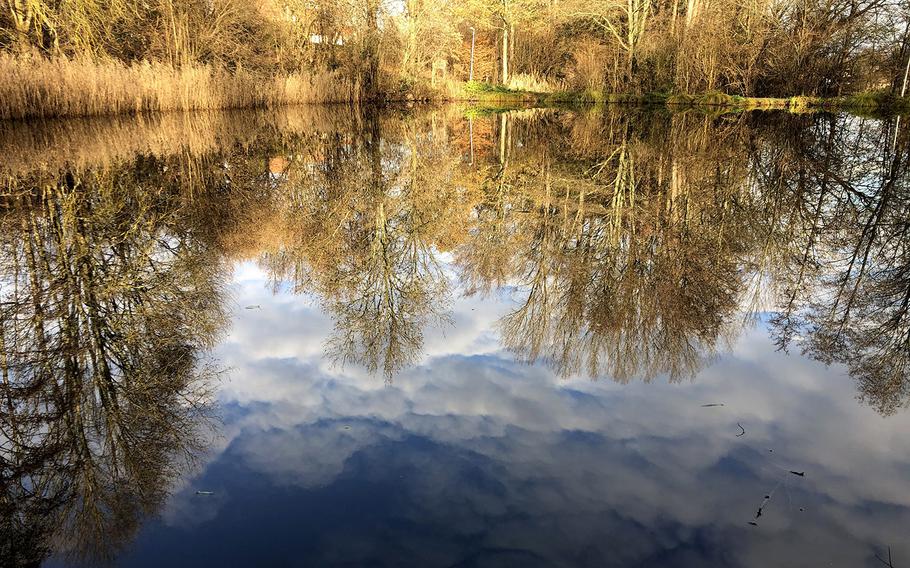 Buy Photo
Calm water reveals a reflection of the beauty of Siegelbach Park in Kaiserslautern, Germany. (Brian Ferguson/Stars and Stripes) 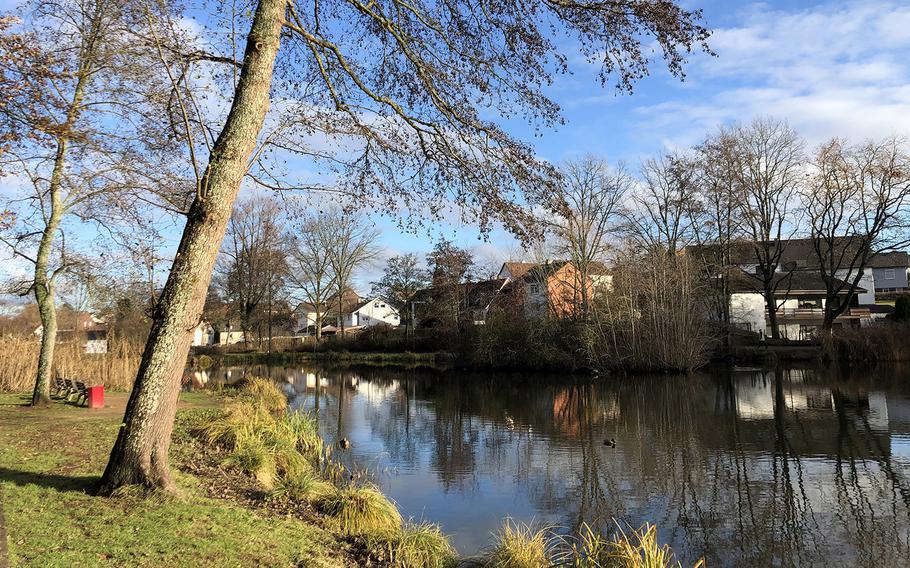 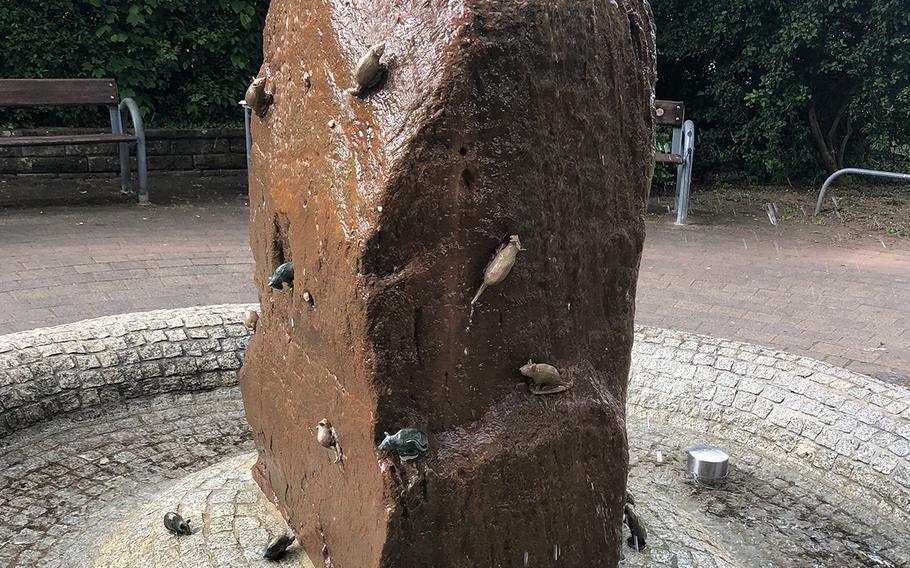 A mouse fountain stands at the entrance of Siegelbach Park. Visitors can attempt to count the number of mice on and off the fountain, but most get it wrong if they aren't counting closely. (Katie Ferguson)

The only legal party in my town is at a duck pond, and it involves mice.

I expected to travel Europe while living here, visiting sites such as the Roman Colosseum and the Louvre. Unfortunately, leisure travel has taken a back seat while the world battles the coronavirus. Anything more than a five-person gathering in Germany is illegal, and I have to find things to do besides watching Netflix on my couch.

Luckily, the Siegelbach Park, just down the street from my house, offers an escape to nature right in the middle of town. After about 10 months of social distancing, shutdowns and quarantines, it’s as good a getaway as any.

Easily accessible, the wooded park is a great place to stretch your legs and enjoy nature. The park is large and is located next to the Siegelbach Zoo and tennis club.

A trail for running or walking surrounds a large duck pond, where visitors can feed the ducks or just enjoy watching them from a bench. For families, the park has an extensive playground, which includes swings, slides, a zip line and a skate area.

A cobblestone path led us to the pond, where a small statue of two mice sat waiting next to a plaque dedicated to the “Feiermeis,” or party mice.

It turns out that what I thought was my sleepy little village has a historical reputation for being a party town. Residents enjoyed their parish fair so much that they acquired the nickname “party mice” in the 19th century.

Its residents became known for starting holiday revelry earlier than most; on Kerwen Monday, a public holiday in September, 11 a.m. is considered late to hoist a glass of beer, according to the weekly Wochenblatt Reporter in Kaiserslautern.

A fountain at the park entrance is where the party really gets going — it’s covered with stone mice doing their best impression of the wild men and women of Siegelbach.

After pulling away from my imaginary revelry, I looked closer at the pond. It’s about two or three acres and full of ducks just waiting to be fed. Bread isn’t good for them, but birdseed, rice or oats will do.

Then we took a walk to the back of the park. The playground was empty, so we stopped to take a trip on the small zip line and ride on the swings. We kept walking a little longer, and the sun came out, reflecting the beauty of the park in the calm pond.

After about an hour and a half, we headed home. The trip was short, but it was nice to get out and do something, even if it wasn’t a trip to Rome or Paris. And with what I’ve learned about my fellow Siegelbachers, maybe I won’t be too shy to open up a cold one early on a holiday.

Information: No website, but the park can be found on Google Maps