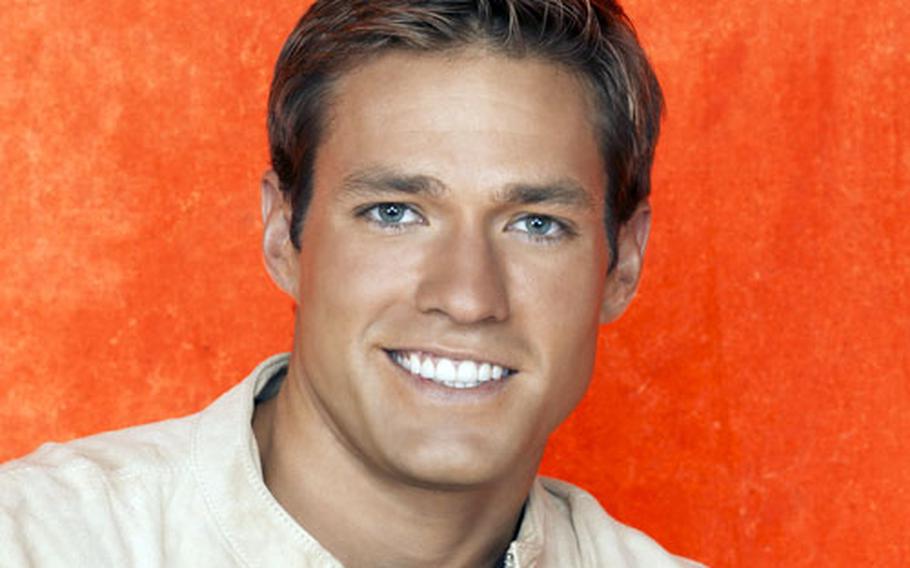 The image of a dashing naval officer sweeping a woman off her feet is a Hollywood icon.

The right guy is Dr. Andy Baldwin, a 30-year-old lieutenant assigned to Mobile Diving Salvage Unit 1 in Pearl Harbor, Hawaii. He&#8217;ll be introduced to America when the matchmaking reality show makes its season debut Monday in the States and Wednesday on American Forces Network.

It turns out that someone Baldwin had met while competing in a triathlon gave his information to the casting department of &#8220;The Bachelor.&#8221;

Initially, Baldwin was worried about the amount of leave time it would require.

In the premiere episode, Baldwin will be introduced to 25 young women who will vie for his affections. Over the next few weeks, Baldwin will whittle the field down to a single woman &#8212; who will receive a rose indicating his desire for a deeper relationship.

Filming actually wrapped up a few weeks ago, but Baldwin can&#8217;t say much about the results.

What &#8220;wasn&#8217;t easy&#8221; can be inferred from ABC&#8217;s press release about the first episode. One woman gets so excited she does back flips in her evening gown. Another challenges Baldwin to an arm-wrestling match. And two tipsy women get into a spat.

Baldwin grew up in Lancaster, Pa., where he was an outstanding swimmer. He now competes internationally in Ironman, Half-Ironman and other triathlons.

In his job, Baldwin serves as the doctor for a team of Navy divers who conduct salvage operations, often seeking the remains of servicemembers lost in earlier wars. For example, the team last year dove to gather information on the USS Lagarto, a submarine lost in the Gulf of Siam in 1945.

Also last year, Baldwin spent about six weeks as an individual augmentee with a team searching for the remains of servicemembers lost in Laos during the Vietnam War. The team needed a doctor to serve as its surgeon and to provide medical care for remote villagers.

Upon arriving, the team had to jump into the brush and cut enough vegetation to permit the helicopter to land. Villagers came from miles around with such diseases as malaria and dengue fever.

While this requires emotional strength, a bit of physical strength and stamina is also needed to keep up with the triathlete. &#8220;There are a lot more athletic things to have women go through: a boot camp-type scenario, have them do a triathlon,&#8221; he said.

But, aside from shared interests, there are some much deeper matters to consider.

&#8220;I wanted to be with a woman who puts family first and wants to have children. And also somebody who can challenge me and who I can challenge back. Somebody who&#8217;s not afraid to challenge me intellectually and emotionally, who makes me laugh and I can make laugh. And together, we are so much greater than we are separately,&#8221; Baldwin said.

To keep up with Lt. Andy Baldwin and his bachelorettes:

On the tube: 7:30 p.m. Wednesdays on AFN-Prime in most time zones