Saddle horses at Kualoa Ranch rest beneath cliffs that keep enticing Hollywood filmmakers back to Hawaii. (Wyatt Olson/Stars and Stripes)

Saddle horses at Kualoa Ranch rest beneath cliffs that keep enticing Hollywood filmmakers back to Hawaii. (Wyatt Olson/Stars and Stripes) 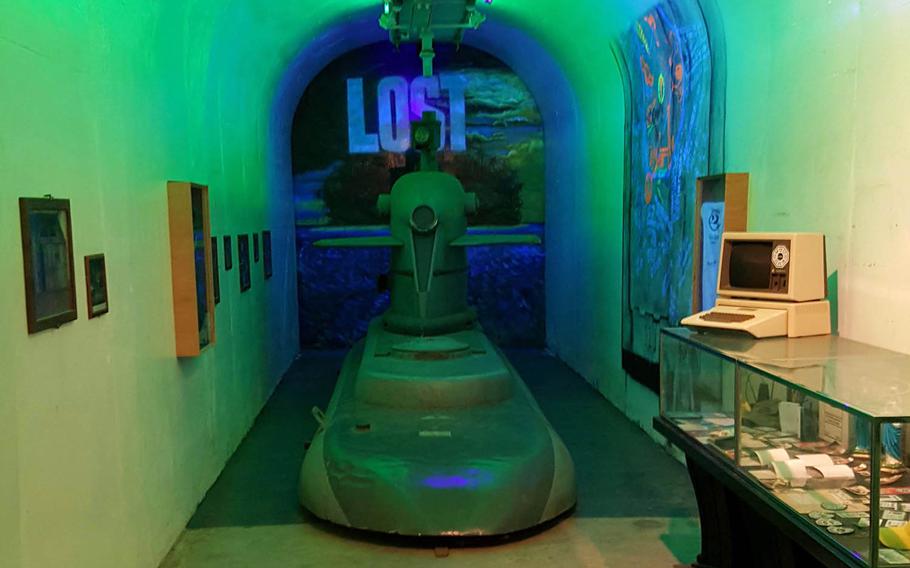 Ethereal lighting envelops props and photographs from the TV series "Lost," which filmed throughout its run at Kualoa Ranch in Hawaii. (Wyatt Olson/Stars and Stripes) A tour guide holds up a toy dinosaur as a camera prop while visitors pose in mock terror beside the fallen tree trunk in Hawaii used in "Jurassic Park." (Wyatt Olson/Stars and Stripes) 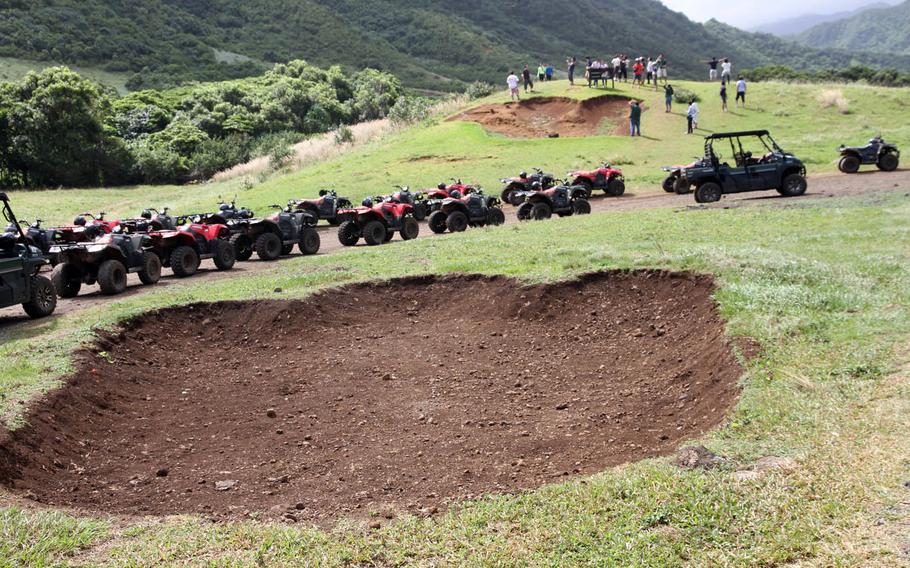 Visitors on at ATV tour at Kualoa Ranch in Hawaii look over Godzilla's footprints, which were made for a movie filmed in 2000. (Wyatt Olson/Stars and Stripes) 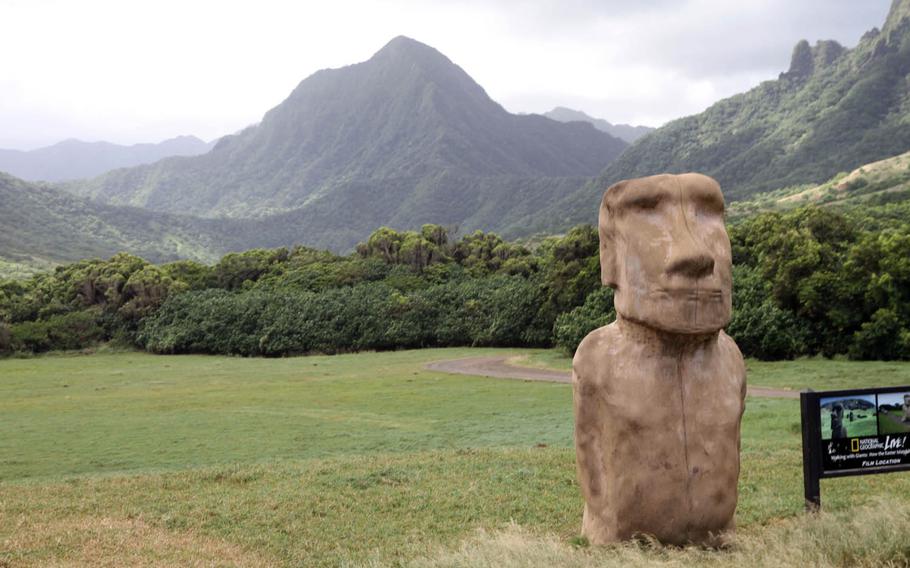 This replica of an Easter Island moai was used to film a National Geographic documentary explaining how the massive stone figures were possibly moved on land. Behind the figure is Kualoa's most iconic mountain peak, seen in numerous films and TV shows that have used the Hawaiian valley for filming. () One of the two entrances into the massive, mountainside Battery Cooper, built in 1943 but now a museum paying tribute to the films and shows that used Hawaii's Kualoa Ranch for filming. () 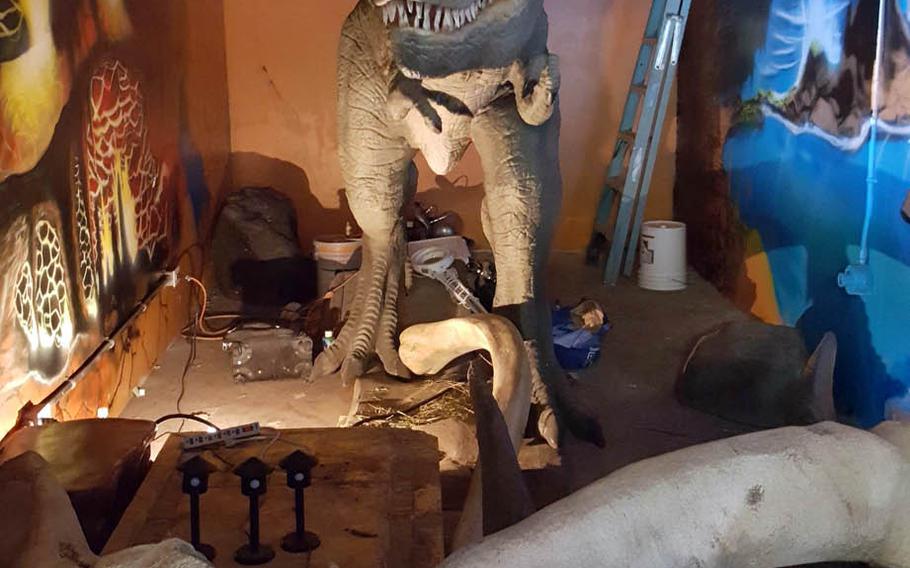 Props used in the filming of "Jurassic World" are displayed at the Kualoa Ranch movie museum in Hawaii. (Wyatt Olson/Stars and Stripes)

To call Kualoa Ranch a “ranch” is a bit like calling Yellowstone National Park a picnic ground.

Sure, its 4,000 acres are home to cattle, horses, wild pigs, shrimp farms and a plethora of fruit trees. But it’s also a tourist destination for boating, jungle hiking, ATV tours, ziplining and riding those roughly 110 horses.

But perhaps the greatest claim for the ranch, now in its sixth generation of family ownership, is its use for decades as a film location for movies and TV shows the likes of “Lost,” “Jurassic Park,” Elvis’ “Paradise Hawaiian Style,” “Pearl Harbor” and “Fifty First Dates.”

If you’re a film fan at all, there’s likely some location you’ll recognize while on the 90-minute movie sites tour of the ranch, which dubs itself “Hollywood’s Hawaii backlot.” The tour is offered seven days a week about a dozen times a day and includes an overview of much of the rest of the ranch. The open-air bus makes several stops for photos and closer looks along the way.

American doctor Gerrit Judd bought about 600 acres of the ranch land from Hawaiian King Kamehameha III in 1850. By the 1860s, its owners started raising sugar cane, and the ruins of the stone-block sugar mill lie just feet from the edge of Kamehameha Highway, the coastal road that winds up the windward side of Oahu.

The ranch’s flatland near the coast was converted by the U.S. military into Kualoa Airfield during World War II. Many concrete bunkers from the war still stand.

The most impressive and by far the largest of these is Battery Cooper, built in 1943. It was carved out of a cliff overlooking the bay and is a warren of rooms and cubbyholes.

The ranch has converted it into a movie museum, with walls bedecked in dozens of film posters and enlarged photos.

One narrow, long room is devoted to “Lost” memorabilia and props, including replicas of the Galaga submarine and the enigmatic 1980s-era Swan-complex computer on which an attendant had to enter “The Numbers” every 108 minutes. If you weren’t into “Lost,” then descriptions of these artifacts are complete gibberish and the displays in this room will be as mysterious as that Swan computer.

But there’s probably some prop that you’ll recognize in the bunker, with one section depicting a World War II-era Japanese Imperial Army garrison headquarters and another showing replicas and photographs from “Jurassic Park” and “Jurassic World.”

There’s a large animatronic T-Rex in a cave that will impress, even if you’re not a fan of the original 1993 “Jurassic Park” or the sequels it spawned.

The tour stops at what is probably the most iconic movie location on the ranch: the fallen tree trunk that shelters two children and an adult from a small flock of dinosaurs fleeing the jaws of a raging T-Rex in “Jurassic Park.”

Visitors form a line for the chance to pose in mock fear behind the tree trunk. The site is in the center of the wide, sweeping Kaaawa Valley, and the mountain peaks surrounding it appear in many films.

The evening after I took the tour, I re-watched “Tears of the Sun,” the 2003 film with Bruce Willis that takes place in Nigeria — but was filmed almost entirely at Kualoa Ranch.

Many of the scenes were set in this valley, where villages were built — and burned — just for that film. The greatest marvel, though, is how the filmmakers so convincingly depicted a West African nation using a Pacific island.

The remnants of other filming remain on the ranch, most notably several giant-sized Godzilla footprints from the eponymous film released in 2000.

Our tour guide said that the footprints, which looked to be about 40 feet long, had been dug a few yards deep for the filming. But after several cattle on the ranch tumbled into the three-toed footprint, they were filled in with dirt to a manageable level. (A tour-guide tidbit: the Japanese Godzilla of yore had four toes.)

The narrow dirt road that the bus follows through this area was traveled numerous times by Adam Sandler in “Fifty First Dates.” Also nearby and still largely undisturbed is Hurley’s golf course from “Lost.”

On some rolling, treeless hills near the end of the tour, a large movie prop from recent filming sat draped in a huge tarp. But the Hawaiian wind and sun had taken their toll, and a row of colossal teeth set in a jaw could be seen.

The tour guide was cagey about what it was used for. But the trailer now out for the 2017 release of “Kong Skull Island” has some familiar terrain.

Address: 49560 Kamehameha Highway, Kaneohe, Hawaii. The ranch is about 24 miles from Waikiki, about a 45-minute drive. Take the H-1 freeway west to the Likelike Highway, Route 63. You’ll pass over the mountains and through the Wilson Tunnel, then descend toward Kaneohe. Exit onto Kahekili Highway, Route 83, heading north. This turns into Kamehameha Highway. There are prominent signs for the ranch, and the entrance is to the left as the shoreline road curves and Mokolii Island, also called Chinaman’s Hat, can be seen to the right. The ranch offers round-trip transportation from Waikiki Beach for $15.