Kitchen Bitte, in the heart of Japan, is meat and potatoes worth your time Buy Photo
The hearty minestrone soup from Kitchen Bitte includes sizeable chunks of an assortment of vegetables. The steamy broth and its lovely flavor improve with every bite. (Daniel Betancourt/Stars and Stripes) Buy Photo
The prosciutto Cesar salad from Kitchen Bitte near Yokosuka Naval Base, Japan, might leave your mouth watering for more. (Daniel Betancourt/Stars and Stripes) 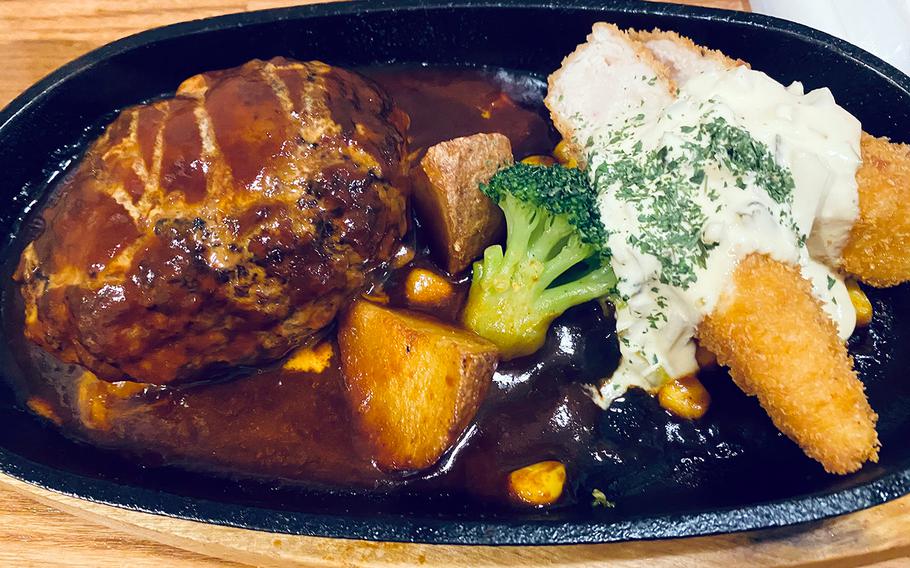 Buy Photo
Kitchen Bitte's hamburger steak with demiglace sauce, potatoes, and a cup of rice felt to me like a slice of home. (Daniel Betancourt/Stars and Stripes)

A one-minute stroll from Higashi-Zushi Station near Yokosuka Naval Base, Japan, will bring you to a calm, rustic restaurant that fuses Western cuisine with Japanese flair.

Kitchen Bitte is the lone Western-style restaurant in the tranquil town of Higashi Zushi, and they even source fresh fish daily from the market in Nagai, according to the restaurant’s website.

The warm entryway and soothing ambiance within are supported by welcoming greetings from the hostess of this humble establishment. The restaurant staff is a husband and wife serving up sizzling plates from an open kitchen.

They provide an English menu for their foreign patrons alongside a website that gives an early peek at what’s cooking. The chef offers an a la carte menu that pairs well with the restaurant’s selection of beer and bottled wine. This leisurely atmosphere is fantastic for a casual visit, or a romantic excursion.

My opening plate was the prosciutto Caesar salad, which truthfully left me desiring a larger portion. The dressing was delicious and coated the salad well enough to tie the whole ensemble together; the Parmesan topping added a crisp, pleasant texture.

I followed the salad with a hearty minestrone soup that included sizable chunks of an assortment of vegetables. The steamy broth and its lovely flavor improved with every bite. After two courses I was addicted, but then the main dish arrived.

The hamburger steak with demiglace sauce, potatoes and a cup of rice felt to me like a slice of home. The succulent beef oozed as I cut into it. The potatoes were roasted to a pillow-like consistency and the sauce provided the perfect finishing touch.

The whole dish was seasoned just right, and I would not have altered a thing.

From appetizers to entrees, prices at Kitchen Bitte range from 500 to 1,250 yen, or about $4.76 to $11.90. Reservations are available and the eatery will also host private events for fewer than 20 people.

The owners do not speak English, but the hostess comes prepared with an app to support any translation concerns that come up during the visit.

Lunch service stretches from 11 a.m. to 3 p.m. and dinner goes from 5 p.m. to 8 p.m. The restaurant are closed on Thursdays. The venue is non-smoking, so families can dine there without worry.

Hours: Open 11 a.m. to 3 p.m. for lunch and 5 p.m. to 8 p.m. for dinner. Hours are limited due to the state of emergency over the coronavirus pandemic. Closed on Thursday.

Prices: Between 500 yen and 1,250 yen for appetizers and entrees. Alcohol beverages cost up to 650 yen per glass, while bottled wine with either half or full service goes for between 2,400 and 4,600 yen.

Directions: A one-minute walk from Higashi-Zushi Station near Yokosuka Naval Base, Japan.