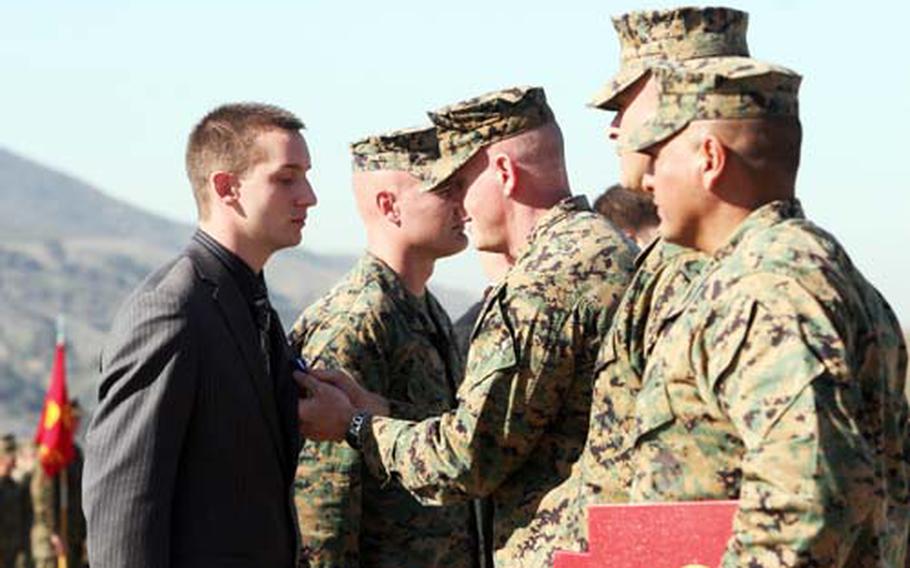 Lance Cpl. Joshua R. Mooi, a 22-year-old from Bolingbrook, Ill., is awarded the Navy Cross by Col. Robert G. Oltman during an awards ceremony at Camp Pendleton on Jan. 8. ()

He had only been in Iraq a few weeks, but already Lance Cpl. Joshua Mooi had earned the nickname "Jinx."

"I had exceptionally good luck, but apparently I was bad luck for everybody else," he said.

The night of Nov. 15, 2005, Mooi stayed up talking with an engineer about another Marine in their unit who had been shot in the calf.

Mooi joked that he had probably just laid down a hex.

The next day would dish out that and much worse.

That was Operation Steel Curtain, a 17-day offensive through five cities in the Euphrates River valley. Anbar province was inundated with insurgents; more than 80 were killed in the first 10 days of fighting. Supply lines of goods and food to civilians were replaced by weapons and fighters flowing from Syria.

Barely more than a year earlier, Mooi had finished his post-high school summer in Bolingbrook, Ill., and signed up for the infantry. He had always wanted to join.

"When you think of the Marines, you think of combat. So that&#8217;s really the only thing I wanted to do," he said.

Now, the 22-year-old is at once brash, youthful, indifferent and filled with the wisdom of someone who&#8217;s seen some of the worst this war has dished out; someone who wears a Navy Cross.

At first, war was not what Mooi expected.

"Kuwait&#8217;s actually pretty nice," he said. They had a great mess hall, he remembers.

"When we first got into country, it was real quiet," he said, other than the distant mortars and rocket attacks.

They&#8217;d only have a week to soak it in. Their battalion commander said they were heading into the "Wild West," Anbar&#8217;s nickname.

But it was supposed to be half-empty.

"Probably after the first block that we got in, you hear the first firefights over the radio. And after hearing that, it&#8217;s pretty much, &#8216;Hey, this is real. There are actually still people here.&#8217; "

Early morning Nov. 16, Mooi said, started off as a "normal" day of clearing through New Ubaydi, some 14 miles from the Syrian border.

According to his award citation, 21 insurgents attacked Mooi&#8217;s platoon from several buildings with automatic weapons and grenades. Mooi ran into one of the "heavily fortified" buildings to provide support and recover wounded Marines.

Mooi talks about the ambush with incredible calm and clarity.

Most residents fled, leaving their curtains up and doors locked, as instructed. But the very last house on the block left curtains drawn and the door was open.

Four Marines opened the door anyway, threw in a flash grenade and were met with a barrage of fire.

It was a trap. A vicious firefight began.

Two dozen insurgents had hunkered down behind furniture lined up in the central hallway for what they must have known would be their final stand.

For a moment, luck was on the Marines&#8217; side. A grenade bounced off Marine Lance Cpl. Ben Sanbeck&#8217;s shoulder and rolled behind him, sending shrapnel to his legs and back. Lance Cpl. Portillo was hit square in his night vision goggle mounts with either a bullet or grenade. It only concussed him. But the third Marine, Cpl. Joshua Ware went down. The fourth Marine, then-Lance Cpl. Antonio Mendez, pulled out to provide cover fire for Portillo as he crawled out.

That&#8217;s when Mooi, Lance Cpl. John A. Lucente, 19, and McGee, ran into the kill zone from one building back. On the way, McGee took the shot to his calf. So their team leader, Cpl. Jeffry Rogers, joined Mooi and Lucente and pulled out two casualties.

When they went back, a grenade was tossed from a spider hole in the drywall; Lucente threw it back and started firing but caught rounds in his stomach.

As Rogers and Mooi pulled Lucente out, they were passed by their lieutenant and rifle platoon commander, 2nd Lt. Donald R. "Ryan" McGlothlin, 26, who was heading inside.

"He&#8217;s asking us what&#8217;s going on, and he&#8217;s shooting back down the hallway and covering us while we&#8217;re making our way out of the building," Mooi remembers. "We turn around, pass him up, and the last I hear is a couple of gunshots and a loud muffled explosion." McGlothlin was killed. He was posthumously promoted to first lieutenant.

Quickly, Rogers sent Mooi back in to collect McGlothlin.

Mooi brought them all back to the casualty collection point, which also was taking shrapnel and rounds and had to be pulled back.

Rogers, Lucente and Ware all were killed by grenades and gunfire.

But Mooi wasn&#8217;t done. As he ran back into the house, another Marine [Cpl. Justin Mayfield] looked at him as if to say, "Are you crazy?" and together they fired their way out the back door.

An insurgent peered around the back corner of the house and exchanged point-blank fire with Mooi. An enemy round lodged into the bolt action of Mooi&#8217;s rifle, jamming it.

For a couple seconds, he said, he felt completely helpless.

The other Marine finished off the insurgent and their captain screamed at them to evacuate before air cover arrived.

"Nothing. Absolutely nothing," he said.

He walked out without a scratch. He was the only one.

Mooi recounts it all with amazing clarity.

"I have a pretty good memory, and luckily I haven&#8217;t really been mentally affected by it too much. Obviously, it&#8217;s going to always cause me constant pain, but I wouldn&#8217;t have it any other way, you know?"

But the guilt did catch up with him.

The platoon had to stay in that area for days afterward.

Mooi started to walk around almost asking for his turn.

It took him several months to get back to the U.S., and though Mooi said he was never close with his family, he figured he had better use his first leave to fly home.

He appreciates his family more, but the Marines are his brothers now.

Mooi plans to study criminology, return to the Marines as an officer, and then retire into federal law enforcement.

"Once you go to combat, it&#8217;s no longer about why the government sent you there, or the policy reason that we&#8217;re fighting this war. The whole reason you&#8217;re there now is to make sure your brothers get home.

"The longer you&#8217;re in combat, the more of a guardian that you become. You want to spare that younger generation the horrors of war."

His time in Iraq was short, but he saw enough.

"In the 72 days we were there, we did more than some guys do in six months."

The only phrase in his award citation he takes issue with is the one that says he was "often alone in his actions."