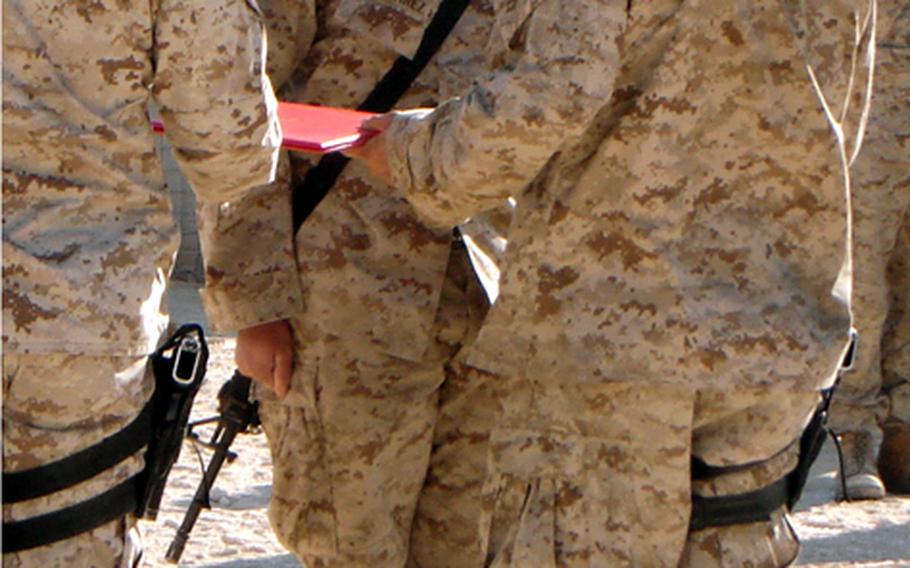 When Cpl. Javier Alvarez, 2nd Squad leader, saw the look on his team leader&rsquo;s face, he knew something bad was coming.

Pinned down and receiving first aid, Alvarez&rsquo;s back was against the wall of the house, an insurgent nest. Seconds earlier, he had peered from behind a tank and seen a Marine from the lead squad lying face down in the sand in front of the house. So he had gathered his squad, took the point position and sprinted toward the danger to evacuate the casualties.

As he ran, Alvarez took three slugs into his legs.

"It felt like something hit me, and I looked down and I saw that I was bleeding," Alvarez said.

He made it to the wall, but the teammate treating his wounds felt the impact of an enemy round. So Alvarez grabbed his rifle, rolled to one side and returned fire into the house.

Spent of rounds, he turned on his back and was putting in his third magazine of his M-16 when he heard, "Grenade, grenade, grenade!"

It was still rolling on the ground.

"I have two or three seconds to get rid of this," he thought.

Alvarez grabbed it and spun himself around to lob it away.

"I don&rsquo;t know if it went off in my hand or within a foot of it. It was pretty close," he said.

Alvarez struggles to tell his story. His speech is filled with pregnant pauses, disjointed phrases and unfinished thoughts.

It&rsquo;s the cost of saving the lives of six Marines. It is his price for his Silver Star.

"I know my hand was burning," he recalled. "Or, it felt like that. So I lifted up my arm to see what happened, and my hand was completely missing. There was just like ragged bone sticking out, with my sleeves from my uniform black and red from blood," he said.

Alvarez knew this was coming. This was his third deployment in three years. He joined weeks after 9/11. He was among the first Marines into Iraq in 2003. He survived Fallujah without a scratch. When his wound comes, he thought, sitting around is not an option.

"I can&rsquo;t just shut down and not function, that&rsquo;s not going to help my squad out," he told himself. "I had already thought about that pretty intensely."

Alvarez&rsquo;s story is yet another tale of heroism born on the morning of Nov. 16, 2005.

Marines of 2nd Platoon, Fox Company, were on their 12th day of Operation Steel Curtain, a dangerous mission to clear houses in Anbar province, when two dozen insurgents made a last stand.

By the time the explosion tore apart Alvarez&rsquo;s hand, two Marines were dead. By the end of the day, 16 men were wounded, five of them mortally.

"It seems like it might be slow motion at some points, but then you find that it&rsquo;s all happening in a heartbeat. It&rsquo;s seconds," Alvarez said.

More than three years later, Alvarez has a lifetime to live with his wounds. He wears a brave face.

"I&rsquo;m missing my hand, and I got shot, and I got shrapnel and all that stuff. But there are guys that are missing two legs, and they are 95 percent burned. To me, that &mdash; I don&rsquo;t know how they overcome it everyday. And that&rsquo;s &mdash; that&rsquo;s my motivation, to see them do it."

He added, "I didn&rsquo;t mourn over my losses or injuries. I had a mission to accomplish and I had other stuff that was going on. I had Marines I had to take care of."

But he is being modest.

Mirrors still give him pause.

"I think that&rsquo;s when it hits me, you know, that I&rsquo;m missing my hand," he said.

He used to do calligraphy, but for the last couple of years he has practiced drawing circles and straight lines left-handed.

"My wife has been extremely supportive in everything I do. I do have times where it&rsquo;s frustrating. You need hands to do things, to do daily things. You need both of them, sometimes, for the most part, and I only have one," he said.

If they have children, he worries he won&rsquo;t be able to toss them in the air like other dads.

Alvarez is now 28, and a student at the University of Arizona&rsquo;s College of Architecture and Landscape Architecture, in Tucson. His wife stays up nights with him, helping craft delicate and intricate models.

Alvarez probably will envision design solutions able-bodied students often overlook, according to Jan Cervelli, dean of the architecture school. But computers will allow him to work one-handed fairly easily.

What truly sets him apart, she said, is that he is a Marine and a veteran of war.

"Clearly, he&rsquo;s going to be a leader in the profession going forward," she said. "I&rsquo;m going to make sure this is something that the entire campus is aware of, including the college. We have a hero here, and we need to really celebrate that."