Jason Harrington ‘All of a sudden, everything went black’ 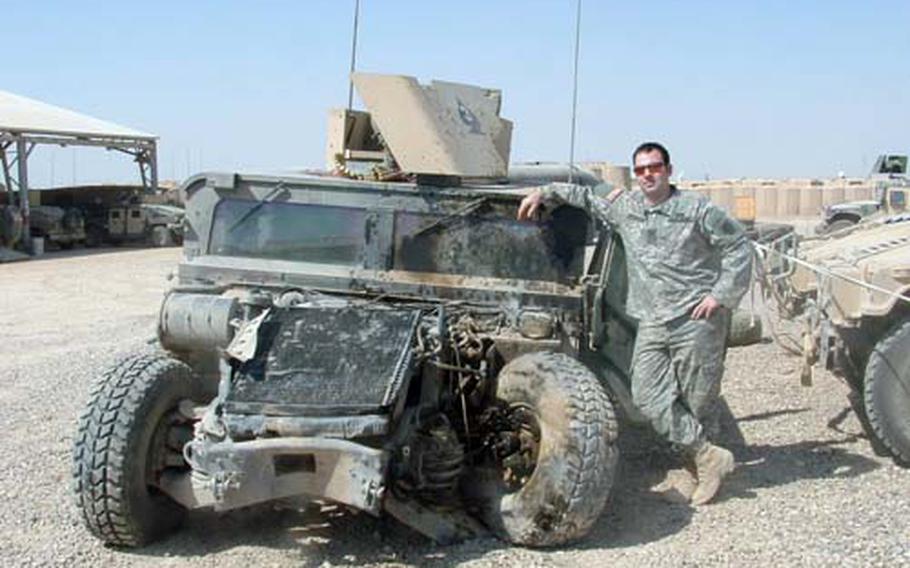 Spc. Jason Harrington of the Pennsylvania National Guard poses with the Humvee that was blown up under him during an incident in Ramadi, Iraq, on Sept. 19, 2005. (Courtesy of Jason Harrington)

Not a day goes by that Jason Harrington does not think about the good friends he lost in Iraq to a roadside bomb in 2005 and the ensuing events that earned him a Silver Star.

And like most combat heroes, he says the dead deserve more credit for their sacrifices than the living.

Harrington, 27, was with the 104th Infantry Detachment (Long Range Surveillance), of the Pennsylvania National Guard&#8217;s 28th Infantry Division, during a yearlong deployment. From June to September 2005, he was part of a sniper and surveillance team operating in Ramadi, about 75 miles west of Baghdad and perhaps the most active insurgent area in Iraq at that time.

"That&#8217;s where al-Qaida in Iraq was based," Harrington said in a recent telephone interview from his home in Lancaster, Pa. Harrington was a member of a four-man team with the primary mission of watching insurgent activity.

On Sept. 19, Harrington&#8217;s team returned to the forward operating base after spending the night in an Iraqi family&#8217;s home.

"My sniper team had come off a mission at 6 in the morning," he said. "The missions are usually followed by a day of rest, but we were told they needed two guys to go with the lieutenant to fill in and patrol. Well, we were just sitting around, so I said I&#8217;d go, but my good friend Spc. Will Fernandez convinced me to stay behind and get some rest.

"I slept a couple of hours, and I think I was watching a movie when the word came down about one or two in the afternoon that someone had been hit, and they thought it was our guys."

Harrington didn&#8217;t know it at the time, but his close friends Fernandez and Sgt. Mike Eagan were killed in the blast, which also took the life of Lt. Mark Dooley.

An improvised explosive device had destroyed their Humvee near a railroad crossing. The Army later reported eight deeply buried 155 mm artillery rounds had been triggered.

"It looked like a shredded piece of almost unrecognizable metal," Harrington said of the vehicle. "Only the hatch was left."

He said he was eager to go to the aid of his friends.

"Me and my team leader jumped into the next Humvee going out to clear the scene and kick in some doors," he said. "For some reason, I took my radio, which was unusual because I wouldn&#8217;t normally take it with me when we went out in the Humvees, since they had their own radios."

Harrington was part of a quick-reaction force of eight men in two Humvees. Since other soldiers were already policing the area of the explosion, Harrington&#8217;s group patrolled a dirt road on the other side of the tracks.

The next couple of moments were lost in the cloud of dirt, dust and smoke. Harrington said his ears were ringing "off the hook" and there was a sense of utter confusion.

When he was able to focus, he discovered the front of his Humvee was destroyed, but no one had been seriously hurt.

"I started engaging areas I thought may have been hiding places for the triggerman," Harrington said.

Meanwhile, his platoon sergeant attached a strap to the rear of the disabled vehicle and the other Humvee started to tow it back to base.

"That&#8217;s when the second explosion hit us," Harrington said.

The soldiers were stranded in the open with two disabled vehicles and knew they were being watched. The radios in the Humvees were destroyed and Harrington took out his portable and exposed himself to fire in order to radio back to his command.

It took a half-hour for reinforcements to arrive, with Harrington radioing them to stay off the roadway. After they arrived, Harrington assisted in making a sweep of the area for more insurgents.

"SPC Harrington&#8217;s calm under fire and tremendous confidence were directly responsible for saving soldiers on a day when many more lives could have been lost. He is a true warrior and proven combat leader," his Silver Star citation said.

"I think I just did whatever anyone else would have done in my position," Harrington said.

"I don&#8217;t know why I decided to take my radio along that day, but I did and it saved lives. Actually, this award should go to my three buddies who died that day. They deserve the credit, not me."