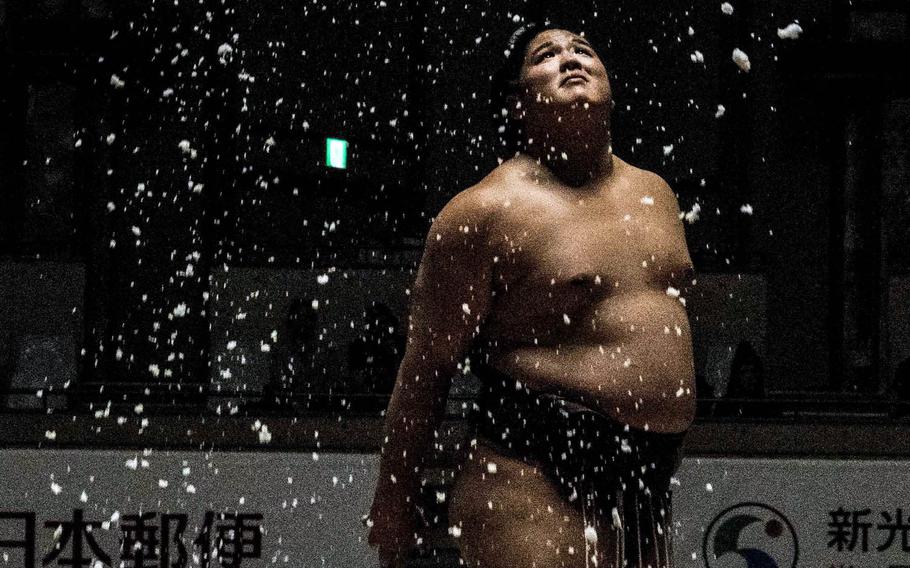 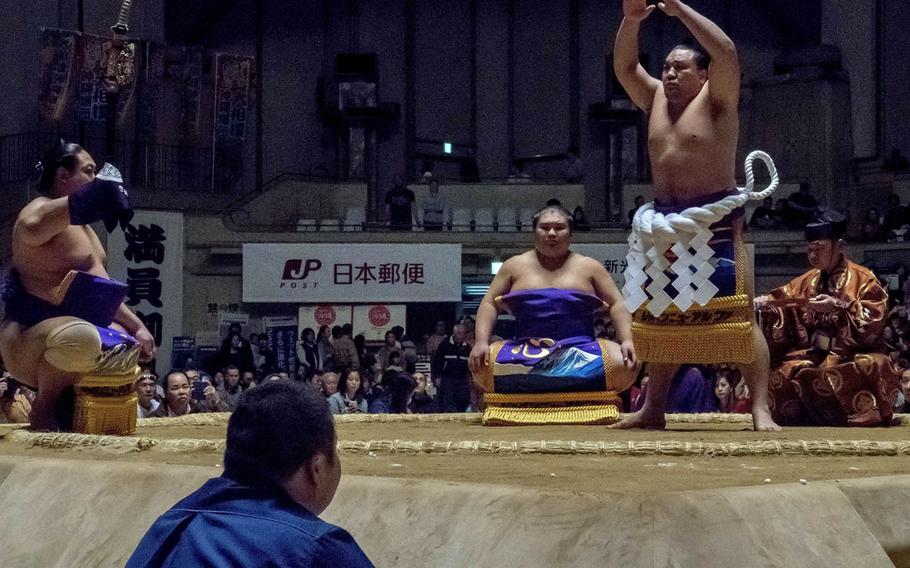 Buy Photo
Yokozuna, the highest rank for a sumo, are identified by their white, braided-rope aprons. (Jessica Bidwell/Stars and Stripes) 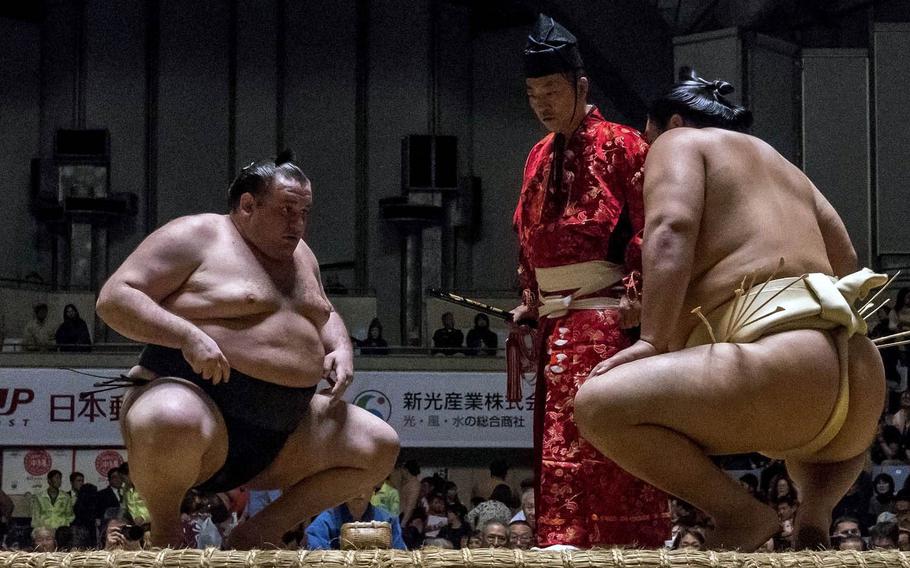 Buy Photo
Sumo opponents face each other, crouch and stare in a mental battle before the physical contest. (Jessica Bidwell/Stars and Stripes) 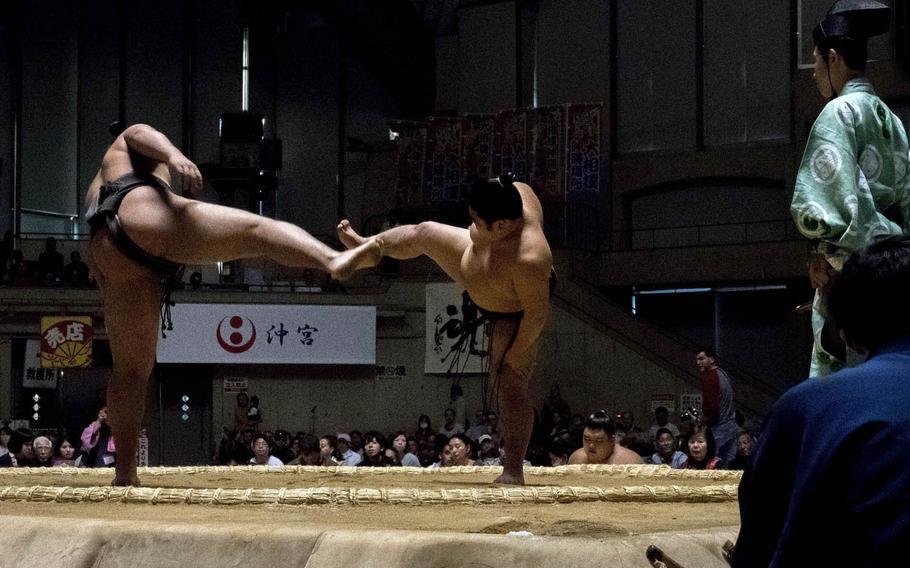 Buy Photo
Sumo wrestlers enter the ring, face each other and lift their legs high in the air before stomping them down to scare away demons. (Jessica Bidwell/Stars and Stripes) 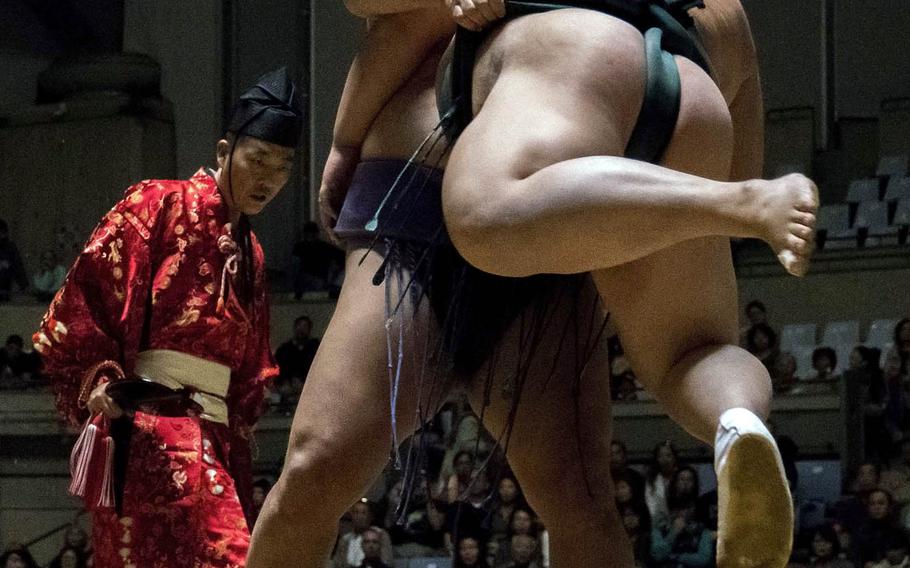 Buy Photo
A sumo fight is lost if a wrestler steps or is forced out of the rope marking the edge of the ring or touches the ground with anything other than the soles of his feet. (Jessica Bidwell/Stars and Stripes) 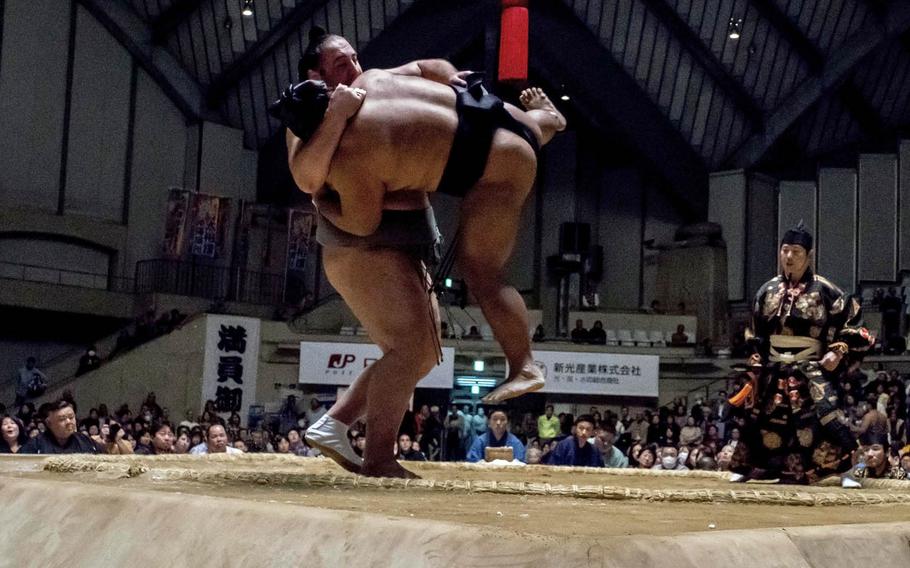 A Japanese sumo tournament isn’t all about the fighting.

The bouts, in which two very large, nearly naked men try to push each other out of a rope circle or onto the ground, are only a small part of a tradition that dates back almost 2,000 years and is marinated in Japanese culture and ceremony.

If you want to get the most out of a tournament, it’s worth learning a bit of background.

According to one of several legends about sumo’s origins, Japan’s future hinged on the outcome of the first sumo match. The story says that in an ancient time when the nation was divided into east and west kingdoms, someone suggested that the strongest men from each one don rope belts and wrestle, with the winner to be named leader of a new, united Japan. This wrestling contest is said to be the first sumo match.

The Chinese characters for “sumo” mean “mutual bruising.” The sport evolved from a mix of Mongolian, Chinese and Korean wrestling, and religion is deeply embedded in events to please the gods, ensure a good harvest and divine protection, and purify the sport itself.

Servicemembers had a chance to see a prestigious Grand Sumo Tournament at the Okinawa Convention Center in December. It was the second time the tournament came to the island.

The sumo ring, or dohyo, was the center of attention.

The elevated 18-square-foot ring was composed of clay. A rope marked the out-of-bounds area, and a canopy hung overhead, making it look like a Shinto shrine. Tassels on each corner of the canopy are said to represent the four seasons, and a purple pennant symbolized drifting clouds and changing seasons.

Before the tournament, junior wrestlers known as rikishi and senior fighters called yokozuna performed a ceremony. The rishiki split into groups symbolizing east and west and each took their turn entering the ring.

The wrestlers were introduced as they filed into the ring in order of rank, each wearing an apron, or kesho-mawashi, designed to match his personality.

After the introductions, they turned to face each other and completed the ancient ceremony by clapping, raising their aprons and clapping again. This tradition dates to samurai days; it ensures that all fighters are unarmed.

There were more ceremonies ahead of each bout. Before entering the ring, wrestlers bowed. Once they got inside, they faced each other and lifted their legs high in the air, stomping them down, a practice originally thought to scare away demons. Then the wrestlers returned to their corners and retrieved handfuls of salt to purify the ring and sprinkle around their bodies to stave off injuries. Fighters also sipped holy water in their corners before making their way back to the center to begin battle.

A robed referee resembling a Shinto priest stood nearby as the wrestlers faced off, knuckles to the ground, before initial clashes, which often determined the outcome of fights.

The rules are simple. A fight is lost if a wrestler steps out of or is forced out of the rope marking the edge of the ring or touches the ground with anything other than the soles of his feet. Pulling hair, biting, punching and kicking above the knees are all banned.

At the close of each match, the wrestlers face each other and bow.

Bouts often don’t last longer than a few seconds. In fact, the preceding ceremony is usually longer than the fight itself.

After the last round of the day, there was a bow-twirling ceremony performed by a highly ranked wrestler. Real fans of the sport don’t leave their seats until this ritual is performed.