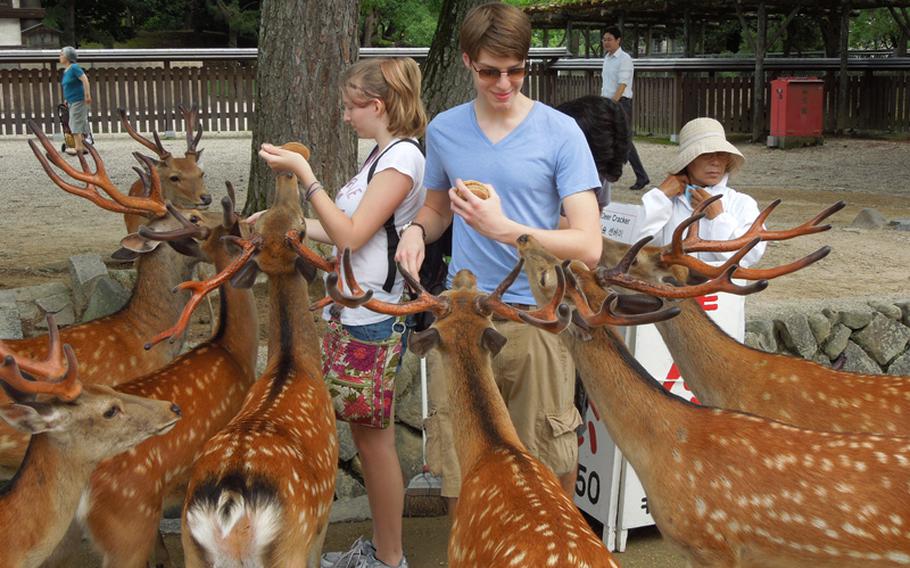 Tourists feed deer in Nara, Japan, which is known for its temples and the semi-tame deer that roam freely inside the massive Nara Koen, or park, and eat biscuits sold to visitors at kiosks throughout the park. (Ashley Rowland/Stars and Stripes)

Tourists feed deer in Nara, Japan, which is known for its temples and the semi-tame deer that roam freely inside the massive Nara Koen, or park, and eat biscuits sold to visitors at kiosks throughout the park. (Ashley Rowland/Stars and Stripes) 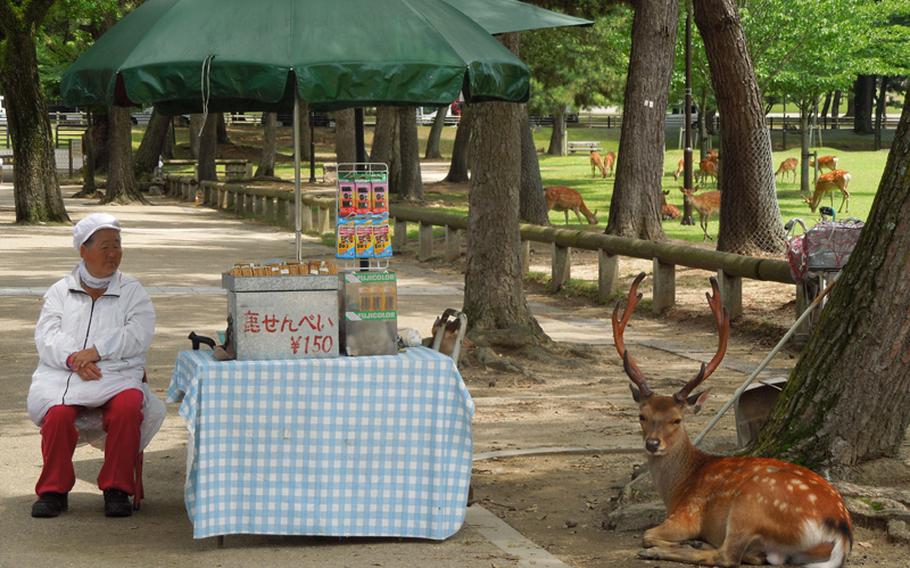 A vendor sells deer snacks for 150 yen, or about $1.89, and disposable cameras at a kiosk in Nara Koen, a 20-minute walk from Nara's train station. (Jon Rabiroff/Stars and Stripes) 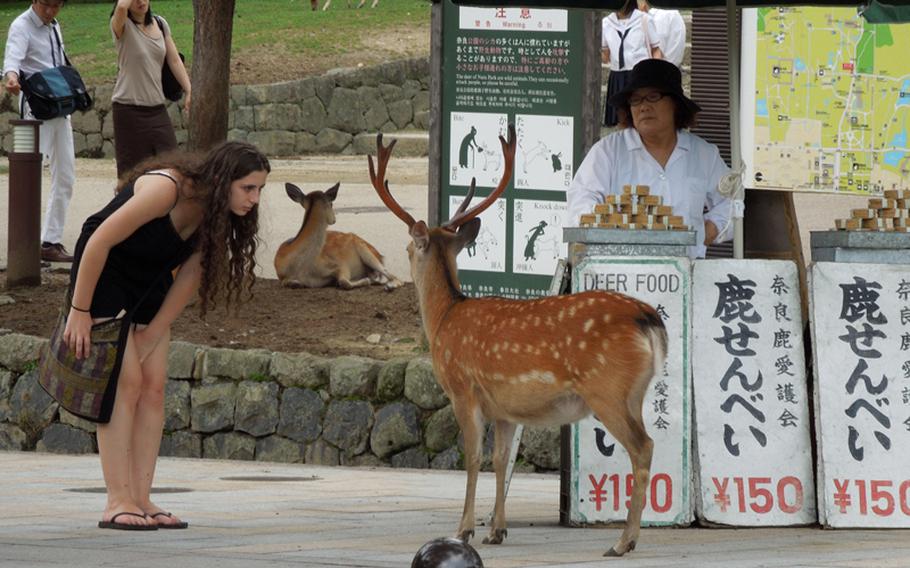 A deer and a tourist inspect each other in Nara Koen, which is famous for the deer that roam throughout the park and are fed by tourists. The deer are regarded as sacred messengers of the gods. (Ashley Rowland/Stars and Stripes) 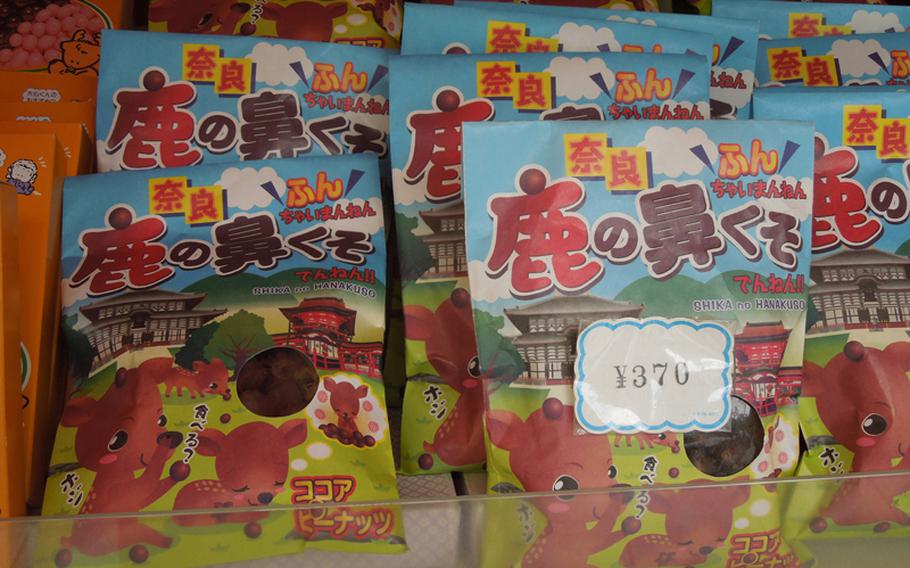 The famous temples and deer of Nara, Japan, are pictured on these bags of cocoa-and-peanut candy sold at souvenir stores in Nara park. The candy is shaped like deer "boogers," according to the package. Writing on the front of the bag says, in Japanese: Nara deer poop? Nah! It?s deer boogers! ?Wanna eat?? asks a young deer with his finger in his nose. (Ashley Rowland/Stars and Stripes)

NARA, Japan -- For more than a thousand years, the deer that roam this former imperial capital have been regarded as emissaries of the gods. Today, the deer of Nara are still considered sacred, and they have a clear message for the many visitors to this quiet, temple-strewn city: Feed us. Now.

Weary of trekking to and from Kyoto&rsquo;s numerous shrines and temples during a recent visit to the city, we opted to spend a day at Nara, just an hour&rsquo;s train ride away. Like Kyoto, Nara is known for its temples, the most famous of which, Todai-ji, houses a 53-foot Buddha statue and was once the center of Buddhism in Japan. But Nara is also known for its deer, more than a thousand of which roam freely across Nara Koen, the massive park that forms the city&rsquo;s tourist hub.

From Nara&rsquo;s train station, it&rsquo;s an easy 20-minute stroll to Nara Koen. As we approached the outskirts of the park, shrieks filled the air, and as we walked closer, we could see why.

Nearly two dozen deer and an equal number of tourists were clustered in front of a small temple, though most of them were ignoring the religious structure. Instead, their attention was focused on the deer, who were, on average, about four feet tall, not including antlers, and were just as cute as the advertisements for the park that were plastered across the city, showing a seemingly smiling deer with a yellow flower impishly tucked behind an ear.

While some of the deer lazed under a tree, most were engaged in some form of chase with their human visitors, nipping at the purses or backpacks of those standing still, or charging at the hands of others who held Bambi gold: deer biscuits.

For 150 yen, hapless tourists &mdash; ourselves included &mdash; snapped up packets of a dozen deer snacks, flat, brown crackers of indeterminate ingredients that looked like something you might buy for yourself at the grocery store. A tiny elderly woman selling biscuits from a small stand was the one human the deer seemed to recognize was not a walking vending machine; when too many deer congregated near her kiosk or clustered near a frightened tourist, she shooed them away with a hand broom.

&ldquo;What&rsquo;s that noise?&rdquo; my boyfriend asked. We listened; underneath the chaos was a soft hum, something between a hiss and a baby&rsquo;s cry. It is apparently the sound that hungry deer make.

My packet of biscuits lasted approximately 30 seconds. As soon as I walked away from the snack stand and started unwrapping the biscuits, deer began running toward me.

If you have not experienced it before, a hissing deer charging at you with bared teeth is a scary thing.

While some people risked being bitten and fed the deer by hand, I tossed my biscuits to them at what I thought was a safe distance of several feet. Most, however, kept rushing toward me with a demonic glint in their eyes and their attention riveted on the stack of crackers in my hand.

As soon as the crackers were gone, the deer sauntered away.

Signs posted throughout the park warn the deer are wild animals that might bite, kick, headbutt or knock down humans. We didn&rsquo;t observe any overtly hostile deer behavior, though we saw several fearlessly digging through bags of food, oblivious to the people holding them.

As long as you were food-free, most of deer were fairly docile and even patient, tolerating the taunts and poking of uniformed schoolchildren en route to Todai-ji, the one deer-free zone we encountered in the park. We even observed one deer nonchalantly strolling through a crosswalk with a group of tourists at a green light.

If you have not spent all of your yen on deer snacks by the end of your visit, you can shop for all manner of deer memorabilia from a row of souvenir stands outside the entrance to Todai-ji, from plush stuffed animals to candy in the shape of deer droppings. You can even buy cookies similar to the ones the deer are eating nearby.

Just make sure to hightail it out of the park before they can get a bite.