Giancarlo Ceolotto sells socks — hundreds of them — from a stall. ()

Giancarlo Ceolotto sells socks — hundreds of them — from a stall. () Fresh seafood is another popular item at many local markets. It’s sold from trailers that are stocked with seafood recently caught in the Adriatic Sea. () 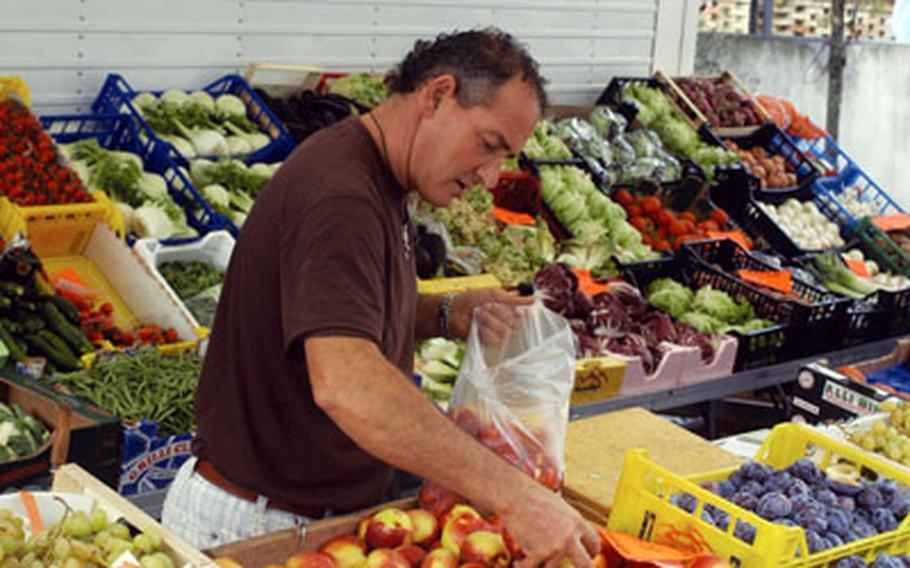 Sandro Saccon fills a bag with a customer’s order. () If the cheese that this Italian shopkeeper is slicing doesn’t suit your taste, you can always try the horse meat sausage that’s hanging next to him. () 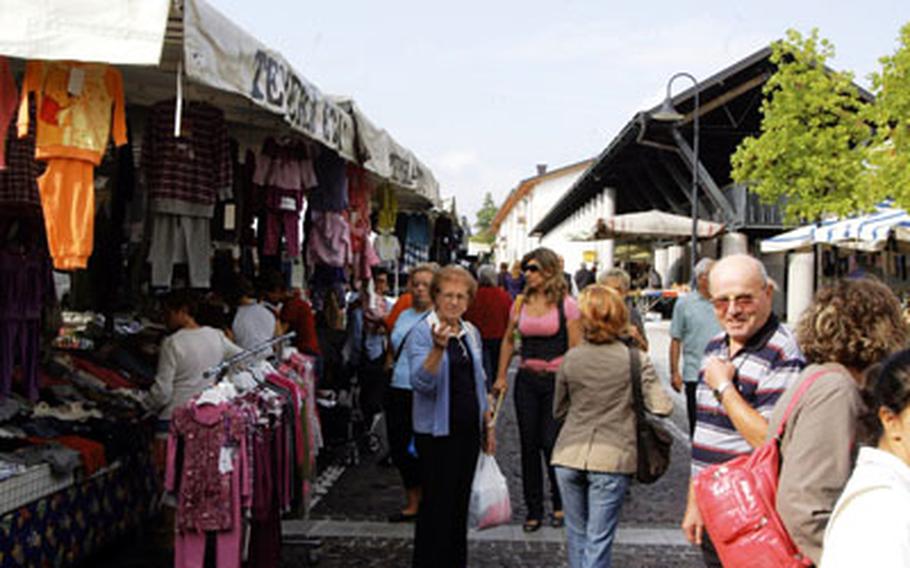 Buy Photo
Small towns and large cities across Italy hold weekly markets such as this one in Porcia, Italy. Fresh fruits and vegetables and a variety of clothing are just a sample of what’s on sale every Friday in Porcia, a short drive from Aviano Air Base. (Photos by Kent Harris/Stars and Stripes)

PORCIA, Italy &#8212; Six days a week, motorists speed over the cobblestone streets of this small suburb of Pordenone.

But traffic comes to a halt Friday mornings as thousands of pedestrians converge on a weekly outdoor market that dates back to who-knows-when. Such markets are common across Italy and hark back to the days before refrigerators, when people did their food shopping every day.

Some Italians still shop that way. And they&#8217;re in luck with the markets, which are generally spread out over the week so that neighboring communities don&#8217;t compete with each other. This not only means there&#8217;s a market every day in the communities around American military bases such as Aviano Air Base, but it also allows vendors to participate in multiple markets during the week. For Americans, it&#8217;s not only an opportunity to get fresh produce, it&#8217;s also a chance to experience, and participate in, a slice of European life.

Porcia, a short drive from Aviano, features a handful of merchants selling a variety of fruits and vegetables. Produce is sold by the kilogram, often shortened and spelled "chilo," or by a single item. A kilogram is about 2.2 pounds, so unless you have a big family, you might want to ask for about half that (un mezzo kilo). They&#8217;ll put your selection in a bag, weigh it, and add some or take some away to meet your requirements &#8212; or price range. If you&#8217;re just looking for an apple or two, point and ask for un pezzo (one piece) or due pezzi (two pieces).

There&#8217;s a lot more than fruits and vegetables, though. Many markets offer cheese and dairy products and fresh seafood from trailers. Porcia features a stall selling barbecued chicken for people who don&#8217;t want to do the cooking themselves.

And often there is a stall selling a colorful array of fresh flowers.

American Michelle Peck bought a couple of bouquets of flowers, along with several bags of vegetables, during a visit last week. A baby carriage served both to ferry two children as well as her purchases.

"At this particular market, there is an incredible florist," she said, adding that she&#8217;s been to several markets around Aviano. The offerings vary among the markets and sometimes change from week to week, she said. She said she usually goes with a plan to buy something specific, but she&#8217;s ready to adapt.

"It really depends on what they have," she said.

Most markets begin as soon as the sun rises and they close around lunch time. A short time later, cars once again own the streets &#8212; until it&#8217;s market time again.