It's a hit! — 'Yakyu' offers a true big-league experience 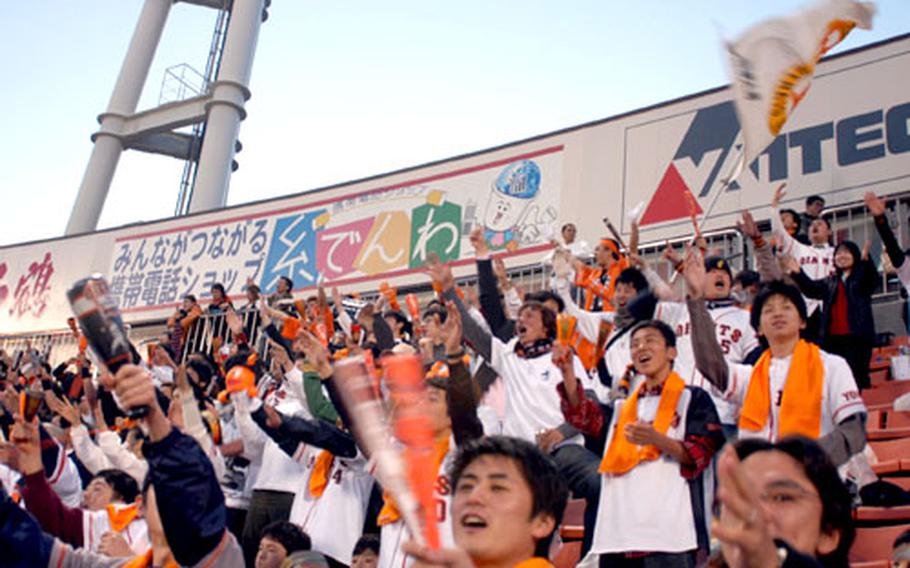 Fans of the Yomiuri Giants baseball team wearing the team colors of orange and black cheer their team at a Giants vs. Yokohama BayStars game in Yokohama on April 5. On-base groups run tours to Japanese baseball games. (Jim O'Donnell / S&S)

Fans of the Yomiuri Giants baseball team wearing the team colors of orange and black cheer their team at a Giants vs. Yokohama BayStars game in Yokohama on April 5. On-base groups run tours to Japanese baseball games. (Jim O'Donnell / S&S) There&#39;s not a bad seat in the house at most Nippon Professional Baseball stadiums. (Jim O'Donnell / S&S) 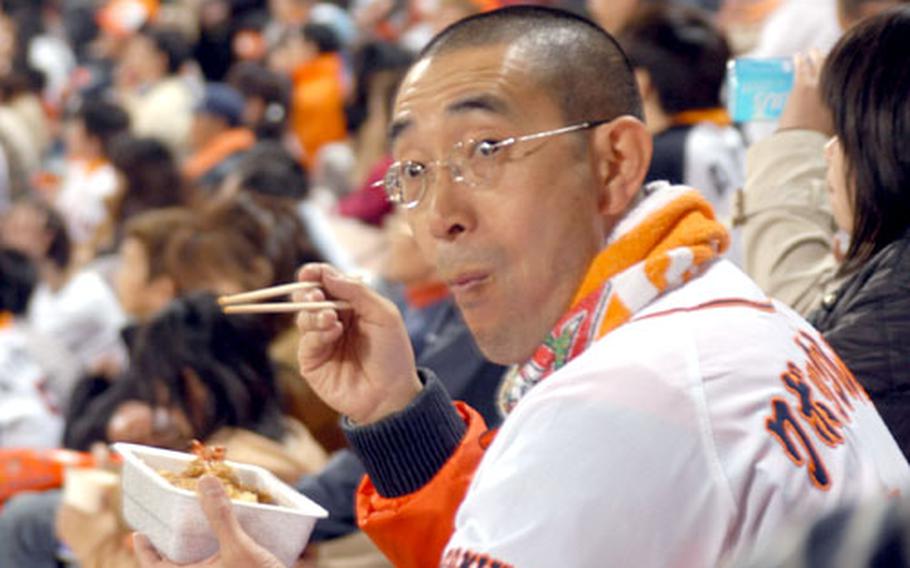 A Giants fan enjoys a snack of tempura during the game. Stadium food in Japan is a bit different than what fans would expect in the States. (Jim O'Donnell / S&S) 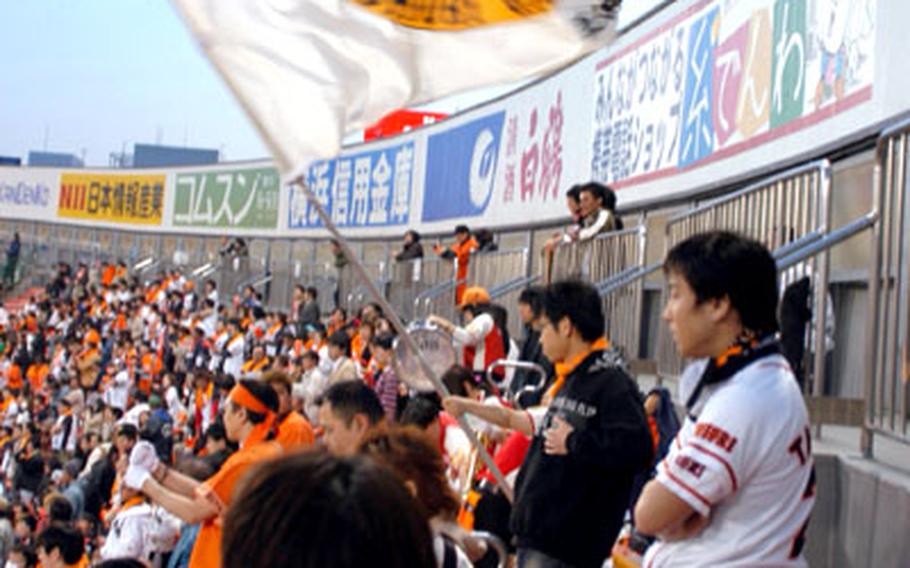 Japanese fans are known for waving huge banners to spur their teams to victory. A fan of the Yomiuri Giants gets a workout at a Giants vs. Yokohama BayStars game April 5. (Jim O'Donnell / S&S)

The Nippon Professional Baseball League began its 2005 season in March, offering a unique chance to experience a reflection of America with a Japanese translation.

Replete with announcers inciting the hometown fans, bugle calls, hot dogs (although on a stick), ice-cold beer and popcorn, the Japanese ballpark phenomenon is something every servicemember should experience, says Wayne Graczyk, author of the &#8220;2005 Japan Pro Baseball Fan Handbook and Media Guide.&#8221;

Graczyk says other differences between American Major League Baseball and Nippon Professional Baseball include size of the ball and stadium design.

Japanese baseball stadiums tend to be standardized, unlike in the United States, he said.

Getting tickets for most games is as simple as walking up to the ticket counter, Graczyk said &#8212; with the exception of tickets to see the Yomiuri Giants, who play at Tokyo Dome.

He said the NPB teams tend to have very loyal and vocal fans, perhaps none more so than fans of the Chiba Lotte Marines, who play in Chiba, east of Tokyo.

&#8220;They have a tremendous cheering section. They fill their section of their bleachers and they all wear the black jersey of their team,&#8221; Graczyk said.

NPB cheering sections usually are in the outfield bleacher seats with the home-team fans often situated in the right field and the visiting-team fans in the left field. They tend to be the noisiest and most exciting areas in the stadium, according to Graczyk.

&#8220;They have a rule that one of their commissioners put into effect about 20 or 25 years ago saying that the fans and fan clubs &#8230; with the drums and the trumpets and the tambourines, have to be in the bleachers,&#8221; Graczyk said.

&#8220;You basically have two kinds of fans &#8212; you have the young kids in the cheering sections and you&#8217;ve got the businessmen in jackets and ties whose companies have season boxes and they go to the game after work &#8230; and they don&#8217;t like to be bothered by the loud noises of the cheering sections,&#8221; he said. &#8220;So they complained, and the commissioner said the cheering sections have to be on the bleachers.&#8221;

Graczyk said one of the best games at which to enjoy this fan interaction is when the Giants travel to Osaka to play the Hanshin Tigers.

Koshien stadium is like a shrine of Japanese baseball, Graczyk said.

&#8220;To really get the unique experience of a true Japanese baseball game to the max, you would go to a hot summer night in July or August at Koshien and see the Giants and Tigers play. It&#8217;s a really good experience.&#8221;