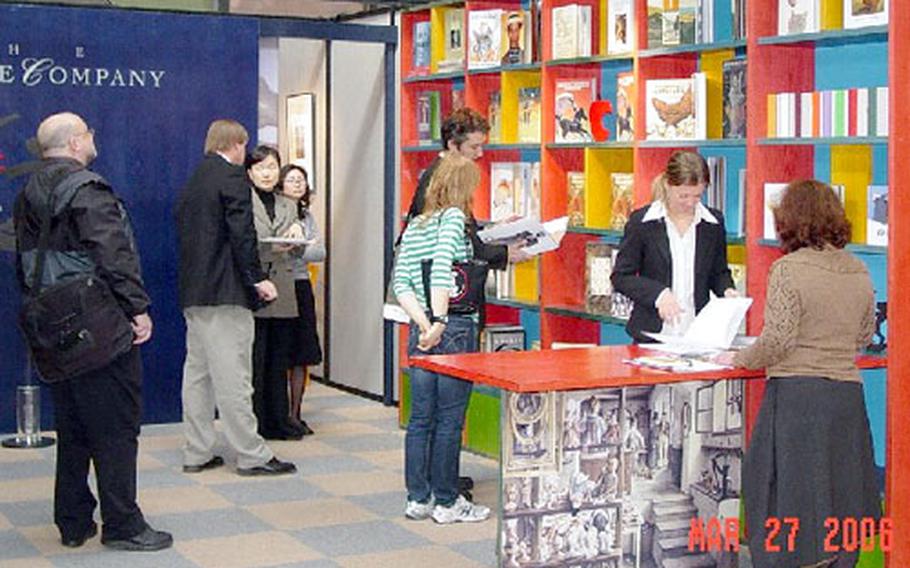 Attendees of a recent book fair in Bologna, Italy, browse books displayed by The Creative Company, a U.S. publisher of children’s fiction. Exhibitors from around the world pay to have booths at the fair. (Angela Cerrito / Special to S&S)

If there&#8217;s one thing a recent international book fair in Bologna, Italy, made clear, it&#8217;s that children&#8217;s books and teen thrillers are not just for the young.

Here, publishers sold rights to foreign countries, traditional books morphed into comics &#8212; manga in Japan &#8212; and the books of a few lucky authors were chosen for television and film.

The books at the fair showed that teens&#8217; attraction to story lines goes beyond steamy subjects and adolescent angst. The young are magnets for fun, naturally drawn to the newest of new and the hottest of hot. Is it any surprise adults follow their lead?

Following are my picks for the Best of Bologna:

Beyond teens&#8220;Cathy&#8217;s Book&#8221; by Sean Stewart and Jordan Weisman. What do you get when an award-winning sci fi writer and a gaming guru collaborate? An adventure that breaks the boundaries of books. Seventeen-year-old Cathy is dumped by her much older boyfriend, Victor. She swipes a packet of documents from his desk (included with the book) in an attempt to discover why he split. Readers are actively involved in her quest, aided by phone messages (numbers in the book) and Internet evidence as Cathy uncovers who Victor really is.&#8220;A Nicer Way to Die&#8221; by Sam Mills. James and his semi-stepbrother, Henry, are the only survivors on a school bus that crashes while on a trip from U.K. to France. As the crash replays itself in his mind, James longs to feel sorrow for his dead classmates, or simply joy to be alive. But he feels nothing but fear because he&#8217;s stranded in a foreign countryside with Henry. James must depend on Henry for survival, but Henry has been waiting for a chance to kill him since they met. Mills has created the type of psychological thriller teens turn to for terrifying reads.Crossing generations&#8220;Rote Wangen&#8221; (&#8220;Red Cheeks&#8221;) by Heinz Janish, illustrated by Aljoscha Blau. &#8220;Rote Wangen&#8221; received this year&#8217;s Bolognaragazzi Award &#8212; Bologna children&#8217;s award &#8212; for fiction. In this intergenerational picture book, a child relates the stories told by his grandfather. Some are simple &#8212; sharing candy with a lovely girl (young grandmother) from the next village. Others, like finding wings in the forest and going for a ride, are more fanciful. Each story is scrawled in a child&#8217;s hand on lined notebook paper, a drastic contrast to Blau&#8217;s deep rich artwork. Janish credits his grandfather as the inspiration for this book (two stories are true) along with 20 years&#8217; experience interviewing older people for his radio program &#8220;Pictures of Man&#8221; for a Viennese station.&#8220;Jazz ABZ&#8221; by Wynton Marsalis and Paul Rogers. Rogers&#8217; illustrations show the musicians doing what they do best, playing or belting it out. My favorite is Miles Davis captured in the moment before a grin. Marsalis used his musical genius to play with words and make them sing. The poems have impact. A fold-out page for the letter &#8220;I&#8221; (Abdullah Ibn Buhaina) with a song for children to snap along, and biographical sketches by Phil Schaap give added weight to this treasure. &#8220;Jazz ABZ&#8221; received a special &#8220;words and music&#8221; award presented this year in honor of Mozart&#8217;s 150th birthday.&#8220;Christmas in the Trenches&#8221; by John McCutcheon, illustrated by Henri Sorensen. In this fictional account of an actual event, a grandfather tells of his favorite Christmas. In 1914, British and German forces were dug into trenches separated by a thin strip of no man&#8217;s land. On Christmas Eve, both sides sang carols and developed a trust. That night, no man&#8217;s land became neutral territory and the two sides shared an unforgettable Christmas.Beyond time and placeWhen Patty Willis began writing &#8220;The Village Above the Stars,&#8221; she felt certain she was creating a children&#8217;s book. Her Japanese publisher disagreed. The book was released last year as an adult graphic novel. Willis&#8217; fan mail is filled with praise: &#8220;You&#8217;re telling the story of our country.&#8221; &#8220;This is our village.&#8221; &#8220;You&#8217;ve captured the essence of Japan of long ago, Japan that is slipping away.&#8221; It&#8217;s an amazing feat, considering Willis is an American. With interest from Korean publishers in the adult market, Willis was in Bologna hoping to sell rights to publishers in the book&#8217;s original language, English.Frank Hinks&#8217; books are inspired by years of storytelling. His latest work, &#8220;Ramion,&#8221; sold Korean rights the first morning of the fair.Lee Merrill Byrd of Cinco Puntos Press brought several adult titles to Bologna this year, including &#8220;Scrapbook of a Taos Hippie.&#8221; &#8220;People are traveling to Taos (N.M.) from around the world, because of this book.&#8221; he said.Books I expect will be great (but were not available for review):

&#8220;Monkey Taming&#8221; by Judith Fathallah. This author is 18, and the book is the story of her life-threatening battle with anorexia and obsessive-compulsive disorder at age 13.&#8220;Ophelia&#8221; by Lisa Klein. &#8220;Hamlet&#8221; is rewritten with a twist: Ophelia lives, and she is hiding an enormous secret.The Peter Pan sequel by Geraldine McCaughrean &#8220;Peter Pan in Scarlet&#8221; to be published in October. Rights have sold to 16 countries and Brian Froud will illustrate the book, but everything else is hush-hush.Angela Cerrito lives in Germany and works as a physical therapist with Educational and Development Intervention Services. She is a member of the Society of Children&#8217;s Book Writers and Illustrators, and was awarded the Kimberly Colen Memorial Grant in 2005, which helps recipients working on their first book.