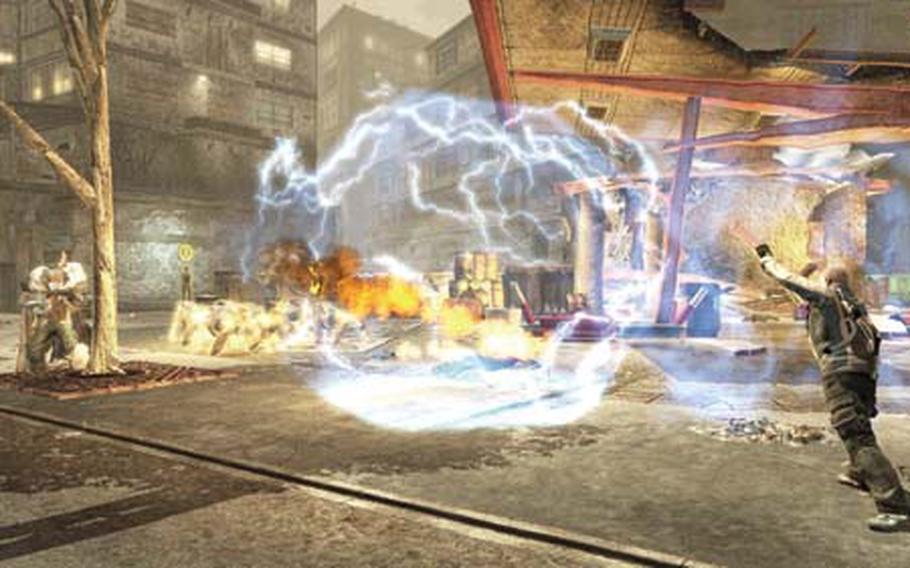 When I was a kid, I wanted to be Batman and use lots of cool gadgets.

Cole is the hero &#8212; or villain &#8212; in Sucker Punch&#8217;s "inFamous," a T-rated adventure game for Sony&#8217;s PlayStation 3. Cole leaps from building to building like Spider-Man, has extrasensory abilities and can shoot lightning bolts from his hands. Definitely cool.

Like any superhero, Cole has a backstory. He was just an average messenger until a package he was delivering exploded, killing thousands but giving him superpowers. After the blast, the government quickly blamed terrorists and quarantined the city, letting it degenerate into chaos as gangs terrorized and disease afflicted its trapped inhabitants.

Cole now wanders the streets under your control, trying to discover what caused the blast that changed his life. He can run, climb and leap virtually anywhere in the city, picking up side missions and interacting with Empire City&#8217;s residents in whatever way you see fit. That&#8217;s part of what makes the game so interesting.

Almost every move you make helps establish your "karma," which determines how people react to you, what side missions you&#8217;re offered and what powers you can acquire. For example, good players can heal injured citizens and be greeted as a hero, but evil players gain extra experience by squashing lowly citizens like bugs. The better or badder you are, the quicker you accumulate powers unique to your alignment.

But either way you go, the game offers lots of action, with a wide variety of challenges and foes.

Cole basically relies on electrical attacks, ranging from a simple zap to a "grenade" of energy wrapped in a cocoon of static electricity.

The controls are well designed and very responsive. They&#8217;re also very forgiving. Jumping from wire to wire or ledge to ledge is a breeze. And if you happen to fall, you won&#8217;t take any damage unless you drop into a body of water. This keeps the platforming elements from getting tedious.

The visuals draw inspiration from graphic novels, rather than the hyper-realism common in many video games. The style suits the content very well.

The game is rated T for violence and some "interesting" phrases tossed about by Cole&#8217;s buddy Zeke and others.

Overall, "inFamous" offers entertaining game play, an intriguing story and lots of action. And that works out well, whether you&#8217;re naughty or nice.