In Vicenza, Bella Zio's pizza is so good you'll moan 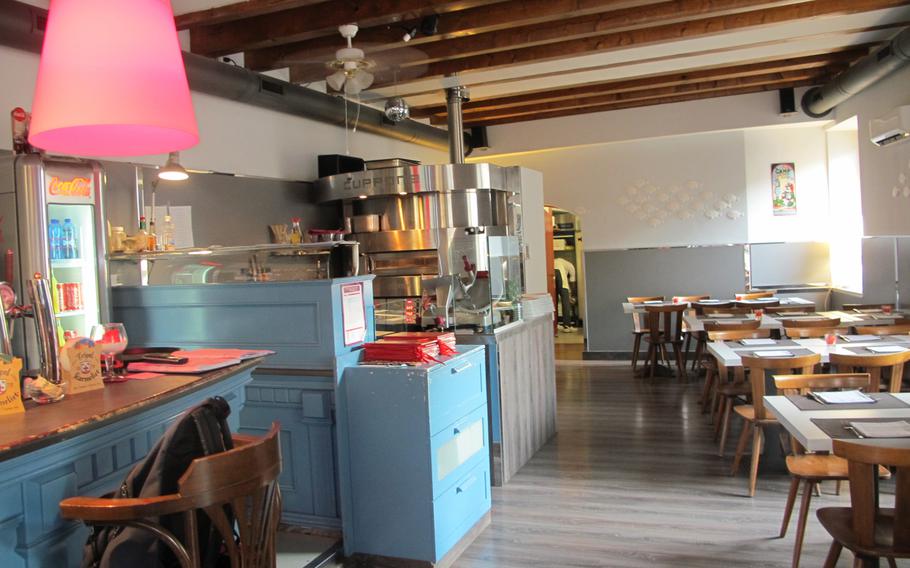 Bella Zio pizzeria, which opened in Vicenza, Italy, a few months ago, is a small space that fills up late in the evenings with local pizza connoisseurs. (Nancy Montgomery/Stars and Stripes)

Bella Zio pizzeria, which opened in Vicenza, Italy, a few months ago, is a small space that fills up late in the evenings with local pizza connoisseurs. (Nancy Montgomery/Stars and Stripes) 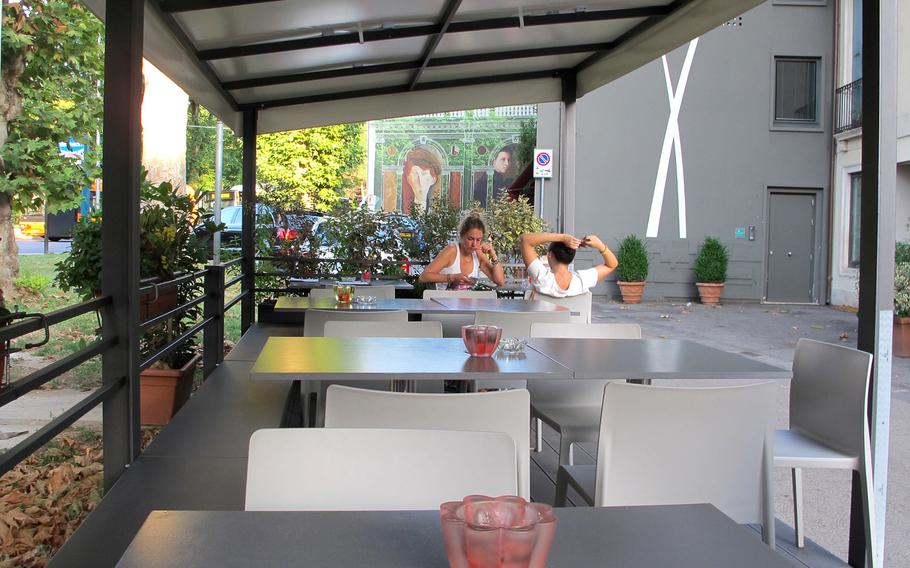 The outdoor seating at Bella Zio pizzeria's in Vicenza, Italy, is bare-bones but comfortable, with street views in the Old Town. (Nancy Montgomery/Stars and Stripes) 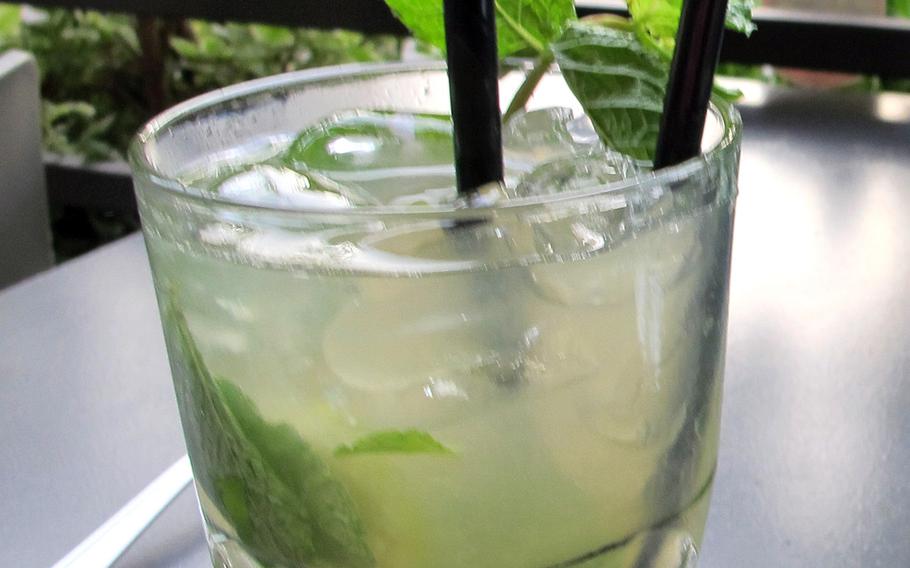 The cocktail menu is among the virtues of Bella Zio, a pizzeria in Vicenza, Italy. People who love pizza also, apparently, love "mojitos." (Nancy Montgomer/Stars and Stripes) 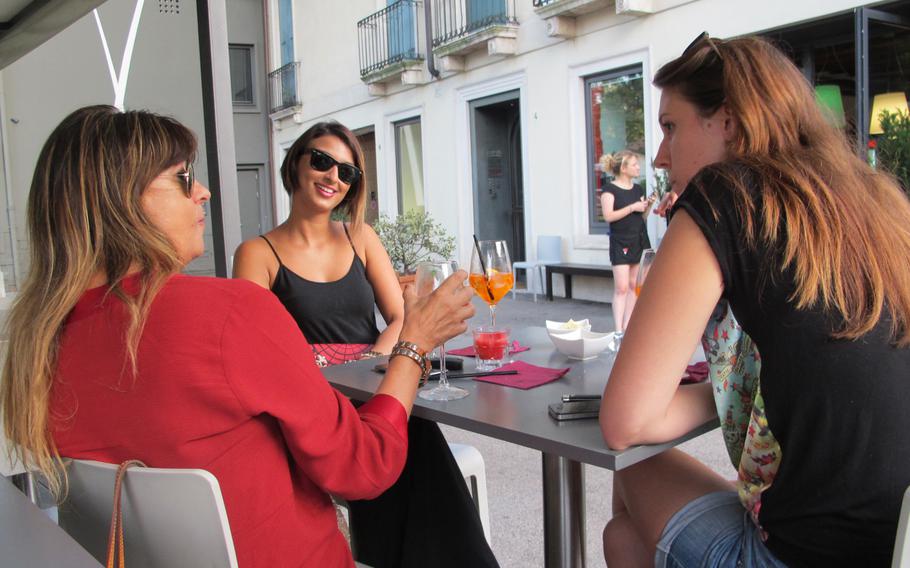 Bella Zio --- "Cool Man" in English --- strives for a hip vibe, and its clientele does skew young and stylish. (Nancy Montgomery/Stars and Stripes) 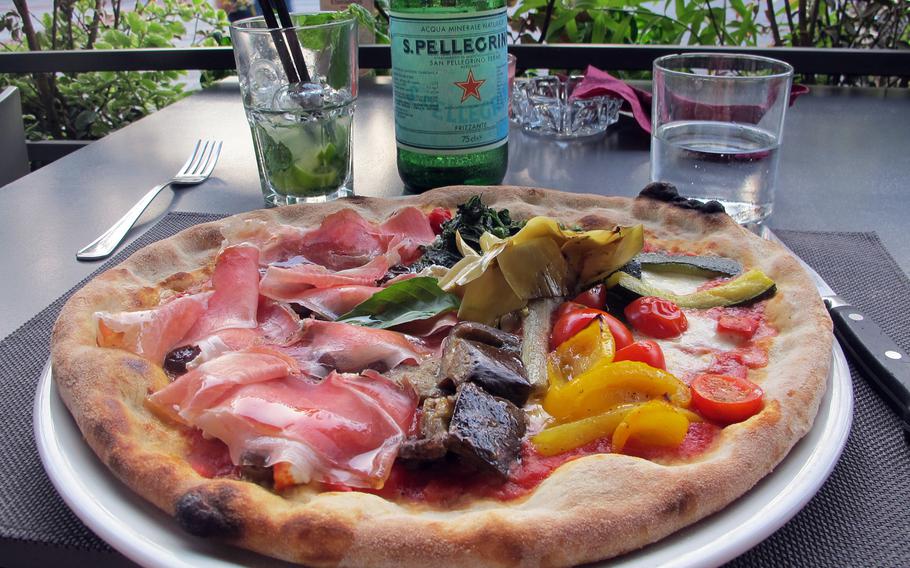 One of the pizzas at Vincenza, Italy's Bella Zio --- half seasonal vegetables and half goat cheese, olives and prosciutto. I can't be positive, but I think I'd actually asked for half vegetable and half "La Rana" --- olive, goat cheese and monkfish. I don't like prosciutto. You can't win them all. (Nancy Montgomery/Stars and Stripes)

Almost everyone loves pizza. Americans eat a ton of the stuff, from neighborhood joints, chains like Papa John’s or even from the frozen food aisle in the supermarket. By one count, some 40 percent of Americans eat pizza at least once a week.

I was not among them. Years, even decades, could go by without a single slice sneaking its fat-, carb- and calorie-laden way into my mouth.

“I’ll have the broiled dorado and a mixed salad,” I’d say at the restaurant.

That happy state of affairs, it almost grieves me to say, has ended. In the past few weeks, I have eaten repeatedly at Bella Zio, a new pizzeria located in Vicenza’s Old Town. There are many factors that draw me, despite the ridiculous name — “Cool Man,” in English.

It’s close to my apartment. There is no cover charge, a ubiquitous and to me highly irritating feature of most Vicenza restaurants. You can get orders to go, and they’ll give you a glass of wine for your short wait. Cocktails are a specialty — daiquiris, mojitos and, so nostalgically, tequila sunrises. And I never noticed this before, but pizza is really cheap.

But what I really go for is Bella Zio’s pizza — so good it forces you to make those dumb yummy sounds or even moan a little.

Yes, the toppings are fresh: the tomatoes, San Marzano; the mozzarella, buffalo. Yes, there are 14 different pizzas under the red category (with tomato sauce), seven pizzas in the white category (without tomatoes) and four specialty pizzas. The pies in the specialty category — Bella Zio’s Rolls Royces, at 14 euros — feature some ingredients I’ve yet to translate, although one has monkfish.

But why do they taste so good? Could it be the special ovens? The herbs in the sauce? I asked the manager, perhaps the cool man himself, manager and boss Federico Piggio.

“It’s the yeast,” he said, with translation help from a nearby woman and her smartphone. “Livito,” he said — live, in English. In addition, the pizzeria lets its dough rise for at least 24 hours, he said, instead of the usual six. That provides “many times of levitation,” he said, speaking in English.

“Tuesday is the best day to eat pizza here,” Piggio continued, because the restaurant is closed on Mondays, and the dough for Tuesday is made on Sunday. That’s double the amount of levitation!”

In any event, I, who never, ever ate pizza crusts, even in those faraway decades when I ate pizza, found Bella Zio’s crusts to be as yummy as the part with all the sauce, cheese and peppers.

The pizzas are thin-crusted in the style of Neapolitan pizza, still the best pizza in the world, according to most experts; Naples was where the modern pizza was invented centuries ago. I’ve had the Margherita di Bufala, the ’Nduja (my favorite so far, with sweet and hot peppers) and La Verdure, with mixed, seasonal vegetables. Thinking of those canned mushrooms and tasteless green peppers on a typical veggie pizza? Think again. Bella Zio’s had an artichoke, cherry tomatoes, yellow peppers, eggplant, peas and spinach. You can’t call that junk food.

There is no salad, but there are eight pizza alternatives on the menu — a salmon pasta, a vegetable and bulgar dish with or without scampi and others on a gluten-free diet. There are also seven desserts, all 5 euros, and a good variety of wines, beers, spritzes, aperitifs, soft drinks, waters and coffees.

If all that weren’t enough, the restaurant is air-conditioned with a few tables outside, and on Wednesday and Sunday nights, there’s live music.