In Europe, the most stylish car usually isn’t the smartest 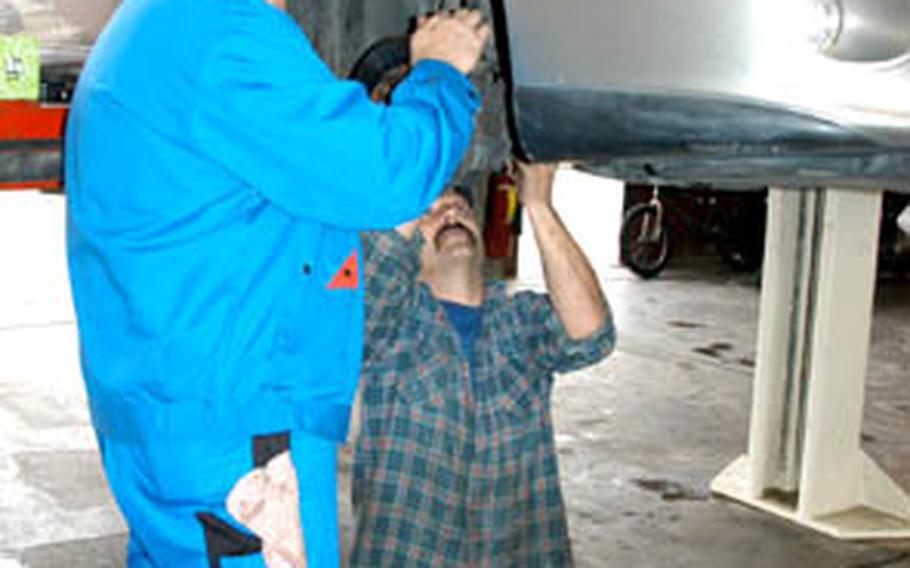 Scott Helgelien, left, a mechanic from the Warner Barracks Auto Skills shop in Bamberg, helps Jim Willis, kneeling, work on his car last month. The shop is a popular weekend place for amateur and professional mechanics to do repairs and maintenance on their cars. (Rick Emert / S&S)

So should you drive this dream car in Europe and possibly run it into the ground on the superhighways or into the side of a building on narrow cobblestone streets? Or should you buy a new or used vehicle with European specifications to drive around while here?

Things to consider are the cost of repairs and availability of parts for American cars on the economy, regular driving at high speeds on autobahns in Germany, the cost and taxes for buying cars and parts in Europe and requirements for taking a car purchased in Europe back to the States.

Of course, buses are not practical for a family of five. And forget about the sound systems.

A big consideration is that American-made cars were not built for the high speeds of German autobahns, Moran said.

&#8220;German cars were made for driving at high speeds on the autobahn,&#8221; he said. &#8220;Overall, they are better vehicles for the road conditions. You can drive an American car fast, but over a period of time on the roads here, the brakes are going to give out.&#8221;

People who will be living in Europe may opt for a used car for driving on the autobahn.

&#8220;A hoopty might be a good idea, but you have to remember that if you are buying it from a [servicemember], they may have done nothing to it in the last three years but add gas and oil,&#8221; Moran said. &#8220;On the German market, used cars are pretty good, if you can get one for about 2,000 euros.

&#8220;Economically, the best bet would be to avoid BMW or Mercedes and go for a Ford or Volkswagen. With BMWs and Mercedes, the previous owner probably drove the crap out of it, putting maybe 200,000 miles on the autobahn.&#8221;

And, even if it might look like a hoopty, a 1980s BMW could still take a bite out of your cash flow, since the parts for German luxury cars &#8212; and the cost of labor &#8212; is considerably more than for the less-sexy Volkswagen.

Opting to lay down a pile of cash for a brand-new car with European specs could lead to paying another large sum when you try to take it to the States, said Linton Heidrich, who runs the Bamberg Auto Parts Store. The Army and Air Force Exchange Service facility also does auto repairs.

Although newer model European cars are very close to meeting U.S. specs, the conversions, which involve changes to make sure the vehicles meet emission, safety and, in some cases, anti- theft standards, still can&#8217;t be done anywhere.

And the conversion should never be done in the host nation country before shipping the vehicle to the States, Heidrich said. The Department of Transportation and the Environmental Protection Agency only accept work done and warranted by licensed companies in the United States, according to a U.S. Army Europe Web site.

Anyone planning to take a European specs car to the States should do some research, he said.

Help with the decision whether to buy a car may be as close as a Morale, Welfare and Recreation program at your local base.

&#8220;The thing I see most when people bring their cars here to work on them is that think they can finally get that Porsche they always wanted. Yeah, they can get it, and it&#8217;s going to bleed their bank account dry.&#8221;

Looking for a place to work on your car, or somewhere to get advice? Here is a list of existing auto hobby shops on bases in Europe and how to contact them: