In Bosnia, holidays might be even happier for troops deployed with kin Spc. Juston Jones of C Troop, 104th Cavalry Regiment, is deployed to Bosnia with his mother Chief Warrant Officer 2 Brenda Jones of the 281st Personnel Services Detachment. Although they are stationed at different camps — Brenda on Eagle Base and Juston at Camp McGovern — they manage to get together. (Ivana Avramovic / S&S)

Spc. Juston Jones of C Troop, 104th Cavalry Regiment, is deployed to Bosnia with his mother Chief Warrant Officer 2 Brenda Jones of the 281st Personnel Services Detachment. Although they are stationed at different camps — Brenda on Eagle Base and Juston at Camp McGovern — they manage to get together. (Ivana Avramovic / S&S) 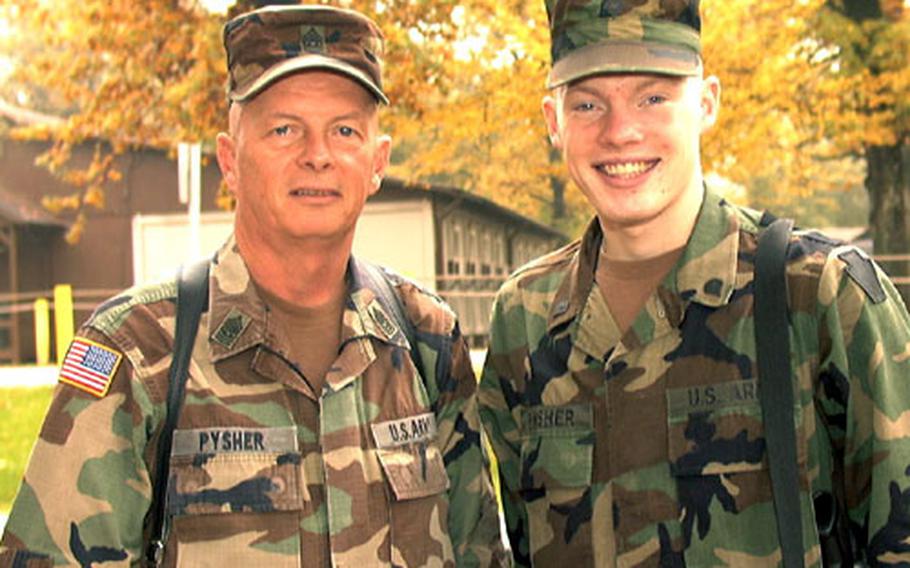 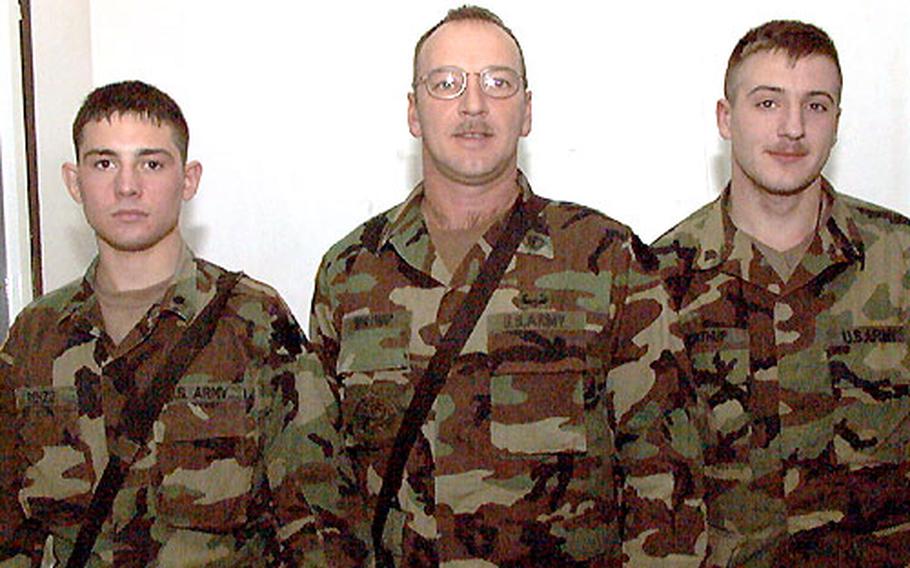 First Sgt. Scott Ostrom, his son Sgt. Ryan Ostrom, left, and stepson Spc. Wade Browne, right, all of 1st Battalion, 109th Infantry Regiment, are peacekeepers in Bosnia. Although in the same country, they do not get to spend much time together because they have heavy work schedules at different camps. (Ivana Avramovic / S&S)

While overseas servicemembers might long to be with families in the States during the holidays, some have the distinct honor of serving along with their relatives.

Some Pennsylvania National Guard soldiers deployed to Bosnia and Herzegovina merely have to go to a different office or base camp to find a familiar face.

Then she got called up herself.

&#8220;When holidays roll up, although I have other sons, this is just a special link, the military special connection,&#8221; Brenda Jones said.

While Brenda Jones is at Eagle Base, and her son Juston is at Camp McGovern &#8212; two hours away &#8212; they still manage to squeeze in visits.

Though the younger Jones admits he sometimes makes a mistake when he&#8217;s with his mother.

In fact, Brenda and Juston Jones are geographically closer in Bosnia than they were in Pennsylvania. Here, it&#8217;s only a two-hour trip to visit, there it&#8217;s four.

But there are good sides to the most-senior enlisted soldier being your father.

On deployment, the professional relationship takes precedence over the personal.

A deployment with a son, for the first time in 23 years in the Army, has given Chad Pysher a different perspective.

While higher rank and more years in the military are an advantage for the parents, the children have an edge too: youth.

And a father&#8217;s shoulder can certainly help make a difference for son in morning.

Staying together has always been a family motto for another group of men from Pennsylvania. First Sgt. Scott Ostrom, his son, Sgt. Ryan Ostrom, and stepson, Spc. Wade Browne, all of 1st Battalion, 109th Infantry Regiment, used to hunt together. Now they&#8217;re keeping the peace in Bosnia together.

Separated by different camps and heavy workdays, they have learned that the military family comes first, but that won&#8217;t take away from family bonds.

When they do meet, they talk about home, what they missed and pass on messages.

Sometimes the family at home gets the latest news before everyone on the ground gets it.

But other times, they count on the father or the son to call or e-mail home.

Dad is sometimes around not only to see that you are doing your job, but also to make sure you do not forget to keep in touch with family.

Although everyone agrees that it is nice to have family near, the holiday twist actually reaches back to the States, as those left behind have to more to miss.

Around the holidays, Ostroms at home will miss four family members: the three deployed to Bosnia, and Ostrom&#8217;s stepson (Renzo&#8217;s brother) who is deployed with the Navy.

Two daughters and a son are still at home.

The first lady of the Pysher family had concerns about the deployment of the family members in the Army.

Brenda Jones has her friends taking care of a 9-year-old boy for whom she is a guardian.

The neighbors make sure the mail is picked up and passed on to her, and they watch the house since her other son is studying in Florida, and there are no other adult family members at home in Pennsylvania.

While some soldiers don&#8217;t deploy with their family, a few get a chance to plan small reunions with their wives, mothers and girlfriends during a pass in Budapest, Hungary.

But for the rare few, reunions are easier to come by.