Hostoun: Where the U.S. saved the Lipizzaners 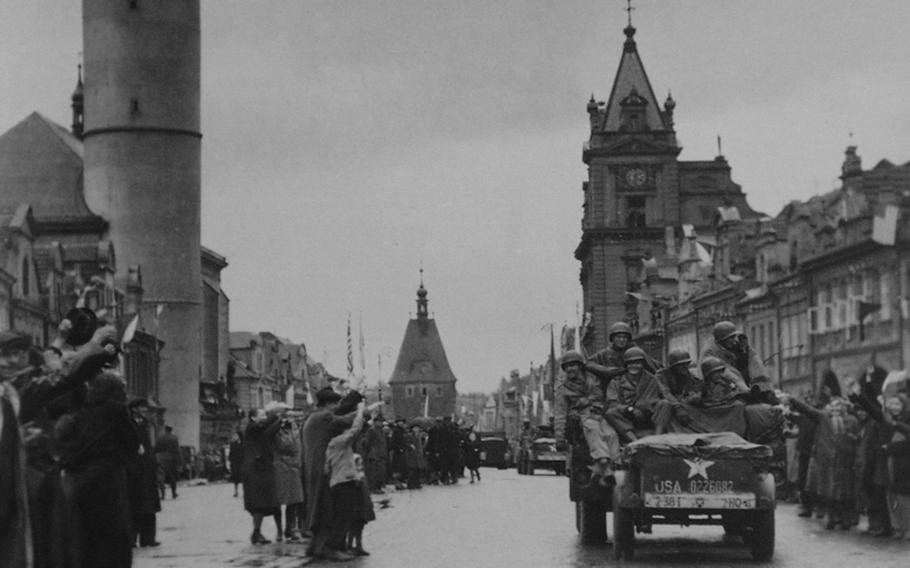 Buy Photo
U.S. troops are welcomed to the Sudetenland, an area of what is now western Czech Republic, at the end of World War II. Not only did the Americans liberate the area, they also helped save horses that had been collected by the Nazis and appeared destined to be eaten by hungry Red Army troops. The photos are from Bohuslav Balcar, a local historian who writes about the end of the war in the Czech borderlands. (Courtesy of Bohuslav Balcar/Special to Stars and Stripes)

Buy Photo
U.S. troops are welcomed to the Sudetenland, an area of what is now western Czech Republic, at the end of World War II. Not only did the Americans liberate the area, they also helped save horses that had been collected by the Nazis and appeared destined to be eaten by hungry Red Army troops. The photos are from Bohuslav Balcar, a local historian who writes about the end of the war in the Czech borderlands. (Courtesy of Bohuslav Balcar/Special to Stars and Stripes) 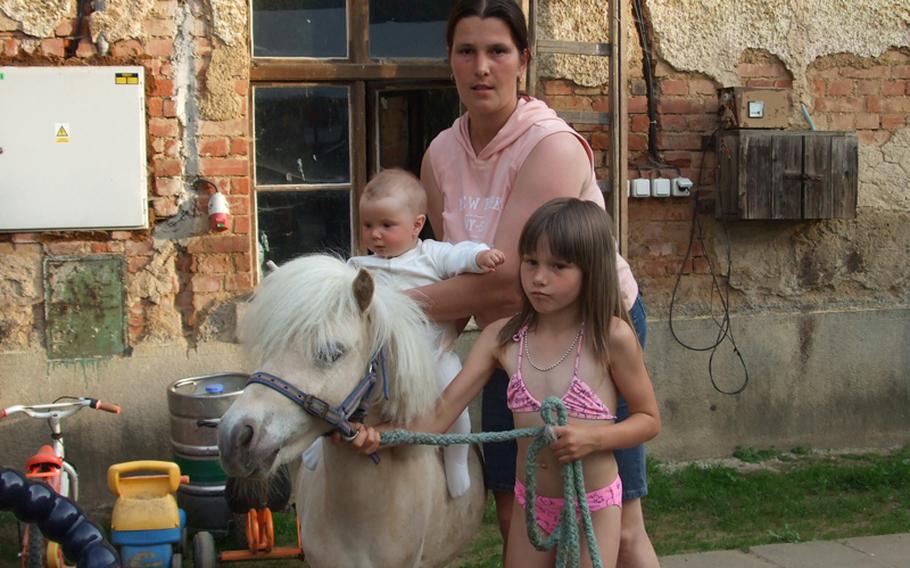 Buy Photo
Michaela Kodadová, who helps run the Svrzno stables and a small pension near Hostoun, Czech Republic, helps her two daughters get used to being around horses. (Lubomir Zmelik/Special to Stars and Stripes) 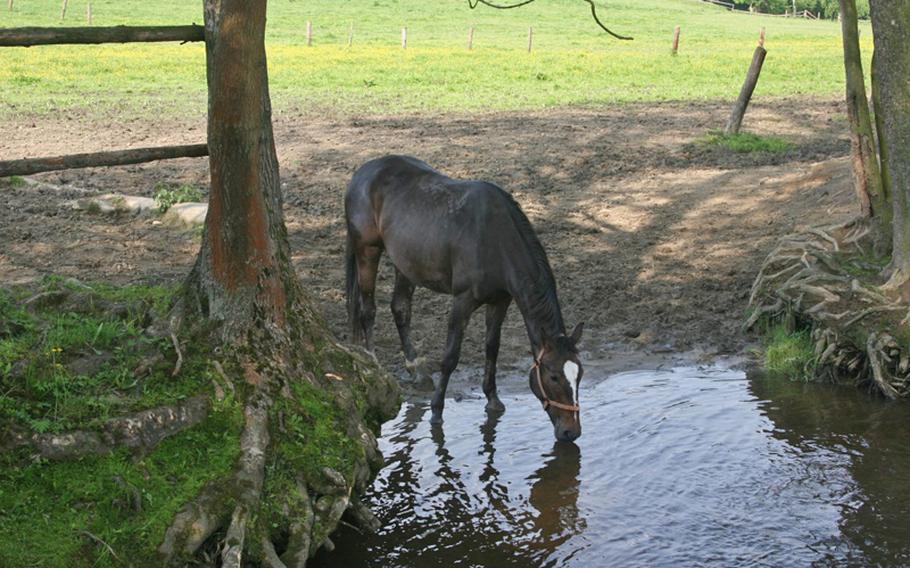 Buy Photo
A horse from the Svrzno stables near Hostoun, Czech Republic, pauses for some cool water from the Radbuza River. (Lubomir Zmelik/Special to Stars and Stripes) 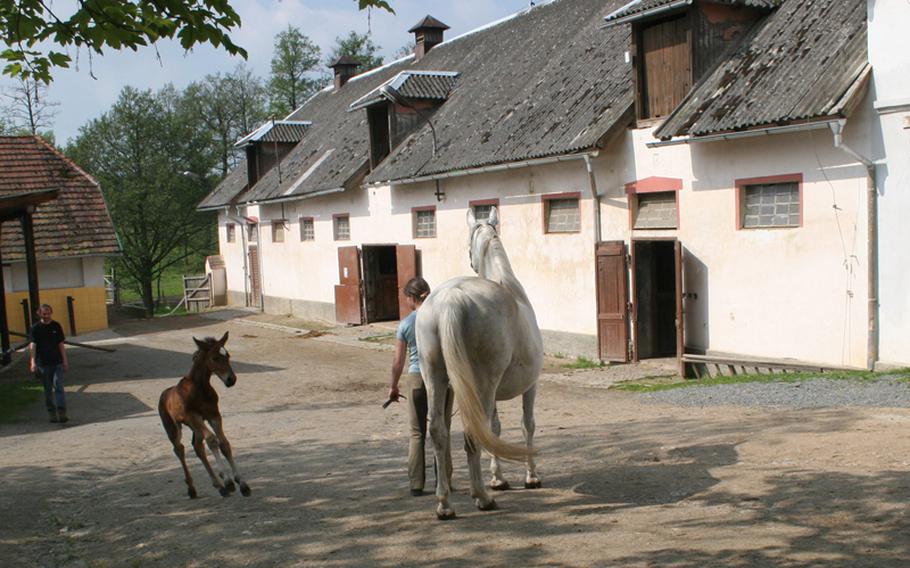 Buy Photo
A young colt asserts its independence while being taken for a walk at Svrzno stables near Hostoun. During World War II, Nazis used the stables as a holding area for horses. The horses were freed by U.S. troops and sympathetic Germans. (Lubomir Zmelik/Special to Stars and Stripes) 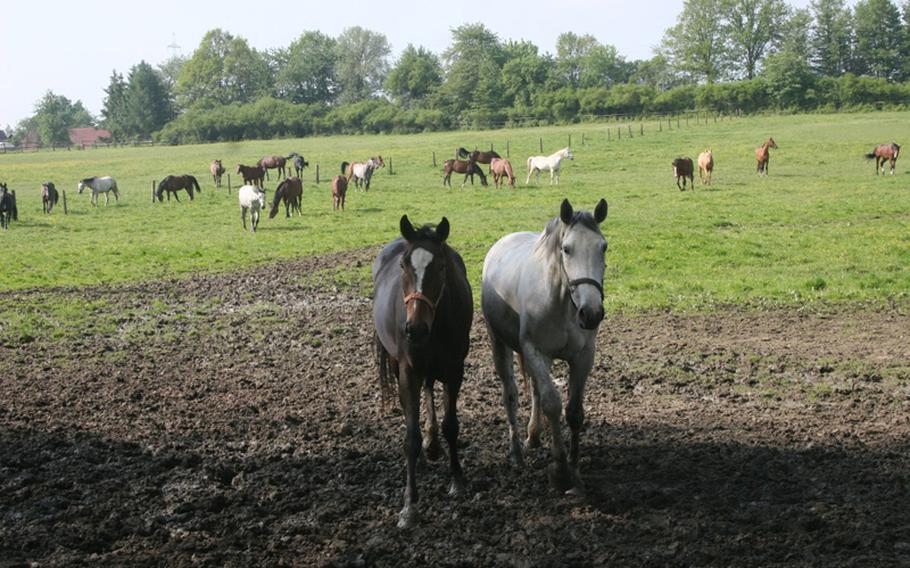 Buy Photo
A group of horses graze in a pasture near the Svrzno stables near Hostoun. The current stable has no offspring of the Lipizzaner mares and foals that were kept there during the war. (Lubomir Zmelik/Special to Stars and Stripes)

Tucked into rolling hills and endless meadows of the Sudetenland, the town of Hostoun, Czech Republic, is about as far off the beaten track as you can get. Swallows dive-bombing your car at two-minute intervals provide most of the action in the town of 1,300. But at the end of April 1945, things were different. It was a busy place, caught in a struggle among three armies.

The Nazis had used Hostoun, an old military stud farm, as an assembly point for purebred horses it had &ldquo;gathered&rdquo; from occupied territory. They included 250 Lipizzaner mares and their foals, the core breeding stock of one of Europe&rsquo;s oldest and most precious bloodlines. Most came from a stud farm near Graz, Austria, but also from Italy, Croatia and what is now Macedonia. They were moved to Hostoun in 1943 when Allied bombing of Austria intensified.

It was a bad decision.

The German army in the Sudetenland was about to fall. To the west, advancing U.S. Army 2nd Cavalry troops were eager to finish the job. From the east, Red Army soldiers were coming on fast &mdash; and they were hungry. Hostoun lay right in their path.

The Hostoun depot commander, German Lt. Colonel Hubert Rudolfsk&yacute;, a former dragoon, knew that if he didn&rsquo;t want his charges to end up in Russian stomachs, he had to give them to the Americans. But he needed to figure out how.

Then, on April 26, a stranger brought him a letter: &ldquo;Send me one of your trusted officers to discuss the fastest way to lead the horses over to Bavaria,&rdquo; it said.

The note was from the leader of a small German weather station just across the border in Eslarn. He had been captured by elements of the 2nd Cavalry led by Col. Charles Reed, and had struck up a working relationship with him. He told the U.S. officer about the horses.

Reed, a horse lover, asked permission to save the horses in a telegraph to his boss, Gen. George Patton, commander of the 3rd Army and an avid horseman who had competed in an equestrian event in the 1912 Olympics.

The answer was fast in coming: &ldquo;Get them. Make it fast. You will have a new mission.&rdquo; (He meant the liberation of some 1,000 Allied prisoners of war from the nearby town of Bel&aacute; nad Radbuzou.)

Reed expected Rudolfsk&yacute; to send the horses to him, but this was not possible: Hostoun&rsquo;s staff had fled and there was no one to guide the horses, which included pregnant mares and newborn foals, some 25 miles across the border.

So Rudolfsk&yacute; sent staff veterinarian Rudolf Lessing to persuade Reed to &ldquo;capture&rdquo; Hostoun. Lessing crossed into Bavaria at night and found the Americans.

&ldquo;He was brought to 2nd Cavalry headquarters &mdash; dinner had been delayed pending his arrival,&rdquo; Reed wrote in his memoirs. &ldquo;After cocktails and dinner, agreement was reached that, provided we furnished an officer to show good faith to ride back with him, Captain Lessing would be able to arrange for the surrender of Hostoun.&rdquo;

Riding back with Capt. Thomas Stewart, Lessing didn&rsquo;t know that a die-hard German general had taken command of Hostoun while he was gone. He returned to find the streets full of armed volunteer soldiers. Lessing hid Stewart in his quarters and took a desperate chance: He asked the general to surrender.

&ldquo;It looked like he would have me hanged for contacting the Americans,&rdquo; Lessing told German author Brigitte Peter, according to a 1982 magazine report. &ldquo;But I just didn&rsquo;t care anymore. &lsquo;We&rsquo;re here to take care of the horses, not win the war. That should have been done four years ago,&rsquo; I said and waited for him to have me shot.

&ldquo;After a long pause he said, &lsquo;Maybe you&rsquo;re right. But I don&rsquo;t have the authority to allow it.&rsquo; &rdquo;

With the advancing Americans just hours behind him and a U.S. officer hidden in his kitchen, Lessing raced 20 miles to corps headquarters.

&ldquo;Haven&rsquo;t we?&rdquo; Lessing countered. &ldquo;Do you really want to see this madness through and destroy everything that&rsquo;s still sound and whole?&rdquo;

The general slumped in his chair. &ldquo;Do what you want,&rdquo; he said.

&ldquo;The capture resembled a fiesta,&rdquo; Reed wrote in his report where he listed the horses captured: 300 Lipizzaners, more than 100 of the best Arabs in Europe, about 200 thoroughbred race horses and 600 Cossack breeding horses.

When asked why he had undertaken the rescue, he said: &ldquo;We had seen so many horrors in the previous months that we had to do something wonderful.&rdquo;

Meanwhile, there still weren&rsquo;t enough men to take the horses to Furth im Wald, behind the U.S. lines. Then a troop of White Russian Cossacks, fleeing with their horses from the Soviets, offered to help. Sadly, their horses stayed behind.

&ldquo;Operation Cowboy&rdquo; went off without a hitch. The horses were safe. The Lipizzaners eventually returned to their home in Austria. The rest were sent to Fort Riley, Kan.

Unfortunately, the Cossack horses ended up in the Red Army stewpots.

After the communists took over Czechoslovakia, the rescue of the Lipizzaners faded from memory.

&ldquo;In school, they taught us that we were liberated by Soviet soldiers dressed up as Americans,&rdquo; local historian Jiri Lesek told me in May.

The Hostoun stud farm ceased to exist. It was turned into cow barns, and the locals were not allowed to mention horses. Only a few horses remained in stables in the nearby village of Svrzno, once part of the complex.

Miroslav Koza, a truck driver and horse fan, bought the stables in 1991 and turned them back into a working horse farm. But he knew nothing about the Lipizzaners.

In 1994, an old man stopped at the stables and asked Koza&rsquo;s daughter, Michaela Kodadov&aacute;, who now runs the place, to show him around.

&ldquo;It still gives me chills,&rdquo; she recalled recently. &ldquo;He kept saying how happy he was that there were horses here again.

&ldquo;There were tears in his eyes. I had no idea who he was.&rdquo;

It was Rudolf Lessing.

Eva Munk is a Czech-American freelance journalist based in Prague. Contact her at eva.munk@gmail.com.

Getting thereHostoun is about 96 miles from Nuremberg. Follow Autobahn 6 to Waidhaus, get off at Exit 76 and head toward Eslarn. In Eslarn, take ST2155 then Route 197 toward Bel&aacute; nad Radbuzou. About five miles past the town, turn right on Route 195 and drive about a mile to Hostoun.

Rail connections are also possible from Nuremberg, with a transfer at Domažlice to Hostoun. Travel time is about three hours, 45 minutes.

Accommodations&bull; The Svrzno stables, about two miles northeast of Hostoun, has a small, comfy pension on the premises. Keep in mind that this is a working stud farm, not a five-star hotel. The sound of horses driven to pasture under your windows will wake you early in the morning. Double rooms cost 1,250 Czech crowns (about $64) per night. Michaela Kodadov&aacute;, who runs the stables, speaks English and German; e-mail info@KoneSvrzno.cz; telephone (+420) (0) 777-231-549. Its website is www.konesvrzno.cz (in Czech only).

The stables offer riding lessons for those staying at the pension for 350 Czech crowns, a discount on the regular price.

&bull; The Penzion stary mlyn (Old Mill Pension), a restored 100-year-old mill on the edge of Hostoun, has two-room suites, with kitchen and bath, a cozy bar, complete with fireplace, piano and guitar. It charges 360 Czech crowns per person/per night, including breakfast. Its website, www.starymlyn.cz, has an English-language version. Reservations at starymlyn@seznam.cz, or by calling (+420) (0)379-496-190.

What to doStopy Valky (&ldquo;Traces of War&rdquo;), a travel agency based in Domazlice, conducts one- and two-day historical tours titled &ldquo;In Patton&rsquo;s Footsteps&rdquo; in World War II Jeeps for one to three people for up to 9,600 Czech crowns (uniform rental and CD are included, ambushes are an extra 7,200 Czech crowns).

The area is good for horseback riding tours, biking, hiking and cross country skiing in the Bohemian forest. During the first week in May, U.S. soldiers and veterans visit Hostoun and Bel&aacute; nad Radbuzou for liberation events.