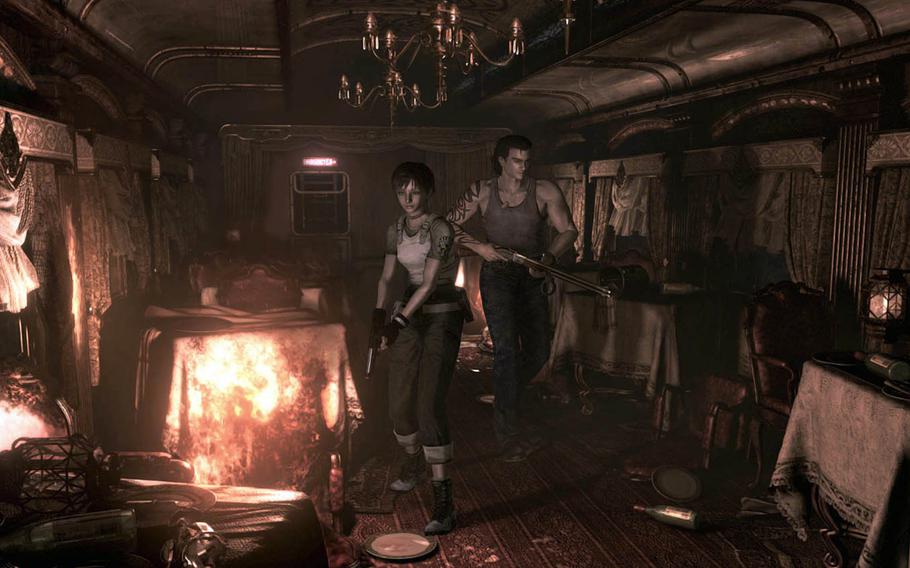 Even though the base models of "Resident Evil Zero" are almost 15 years old, everything looks quite nice. In particular, the backgrounds are exceptionally well rendered, with details that add to the foreboding atmosphere. (Courtesy of Capcom)

Capcom’s “Resident Evil” might be one of the most convoluted game franchises ever.

The series, famous for its esoteric puzzles, atmospheric world and utterly nonsensical storyline, has generated more remakes, releases and spinoffs than any other franchise I can recall.

Take, for instance, “Resident Evil Zero.” This prequel to the original 1996 title was released for the Nintendo GameCube in 2002, then again for the Wii seven years later. Now, it has been re-re-released as a high-definition remastered edition for the PC, PlayStations 3 and 4, Xbox 360 and Xbox One.

Those who played any of the previous versions will find precious little to be excited about with this release. It plays exactly like the old-school “Resident Evil” games, complete with wonky controls, bullet sponge enemies and an overly frustrating inventory system that tacks needless difficulty onto a game that hardly needs it.

Being an HD remaster, its visuals have been greatly cleaned up. Even though the base models of the game are almost 15 years old, everything looks quite nice. In particular, the backgrounds are exceptionally well rendered, with details that add to the foreboding atmosphere.

After playing through the opening sequence, which involves a train, two thoughts occurred to me. One: Few games take advantage of the inherently claustrophobic nature of a moving train. Two: Static backgrounds really need to make a comeback.

The remaster also adds a “Wesker mode” that allows players to take control of the series’ most notorious bad guy. Unfortunately for the game’s veteran players, this mode isn’t available until the storyline has been completed. I really wish it had been unlocked at the beginning, considering it offers the freshest experience for seasoned gamers.

But perhaps this remaster isn’t for “Resident Evil” veterans. After all, how many hardcore fans were really clamoring for yet another remake of “Zero”?

The question then becomes: “How well does this work as an entry point for newcomers to ‘Resident Evil’?” That depends on how forgiving newer players will be with game mechanics that have been left behind by modern game design.

A prime example is the controls. Before adjusting to a system that predates true dual-stick controls, players will struggle with movement. Firing and moving at the same time is impossible. This won’t surprise old-school fans, but I expect more than one newcomer will be dismayed at the overall clunkiness of the control system.

Other mechanics pop up that feel like relics of a bygone age. In particular, the inventory-management system is unforgiving. Players have a very limited amount of space and will often spend too much time having to juggle weapons, keys and healing items.

Items can be dropped on the ground and picked up later, but that only helps a little. Having to drop ammo to pick up a key that inexplicably takes up the same amount of room as a briefcase isn’t fun, no matter how much challenge it adds to the game.

That’s not to say all the returning mechanics are bad. The save system remains as refreshing as it was back in 1996. See, players nowadays are used to being able to save any time they’d like. With “Resident Evil Zero,” the clock has been turned back to a time where that wasn’t always the case.

There is a limited number of ink ribbons available in the world. Once those are gone, so too is the ability to save progress. I feel this adds a significant, organic challenge to the proceedings. Do you press your luck going into the next room, or is now the time to burn one of your saves? To my mind, that adds just as much tension to the game as the oozing walls, crashing thunder and grotesque enemies.

The character-swapping system remains in place, as well. With a press of a button, players can switch between playable characters Rebecca Chambers and Billy Coen. This is done mostly to manage inventory, but it also comes into play with some fairly involved puzzles. Finding a key and sending it up a dumbwaiter to the other character, for instance. It’s nothing groundbreaking, but it works well enough to remain interesting throughout.

In short, “Resident Evil Zero” is exactly what it sets out to be: a look back at the lineage of a franchise that has become more action-focused. With that comes the good of nostalgia and seeing the beginning of a venerated series. It also brings the bad of outdated mechanics and the feeling that this has all been done before.

The port to the new consoles is rock solid, though. Technically, the game runs perfectly, with nary a glitch or complaint popping up during my time with it.

I’d say if you have never played one of the pre-“Resident Evil 4” games, this might be worth a peek. It’s also worth a look for veterans of the series who might be a little annoyed at the direction the series has taken since “Resident Evil 5.”

After all, this is classic “Resident Evil,” for better or for worse.

Capcom provided a review copy of this game.