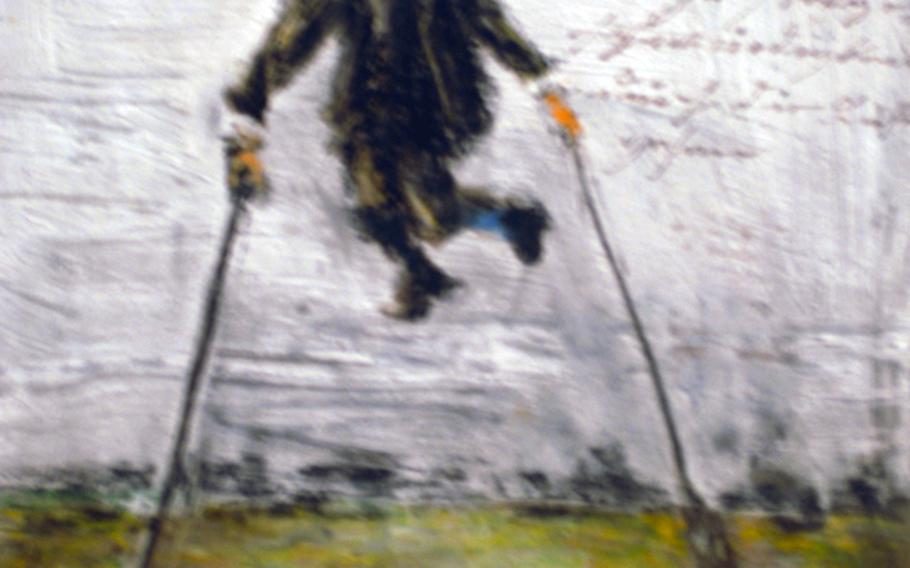 The exhibition features the works of Josef Forster, a mental patient at an asylum in Regensburg, Germany, in the early 1900s. Forster, diagnosed as schizophrenic, longed to be able to transcend his human failings and move about by floating through the air. In this painting by him, he is wearing a mask to keep his bodily essences contained and remains tethered to the ground only by weights attached to walking sticks. (Nancy Montgomery/Stars and Stripes)

The exhibition features the works of Josef Forster, a mental patient at an asylum in Regensburg, Germany, in the early 1900s. Forster, diagnosed as schizophrenic, longed to be able to transcend his human failings and move about by floating through the air. In this painting by him, he is wearing a mask to keep his bodily essences contained and remains tethered to the ground only by weights attached to walking sticks. (Nancy Montgomery/Stars and Stripes) 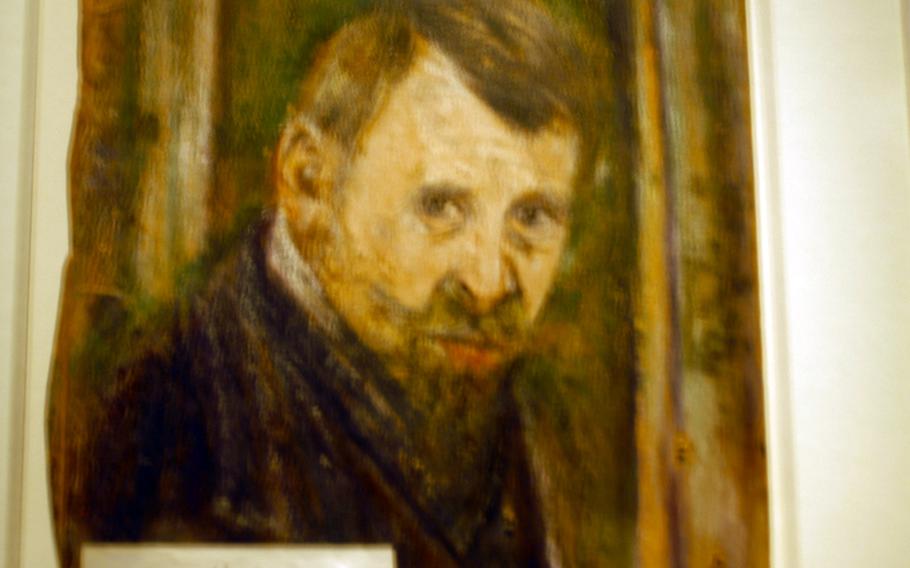 A self-portrait by Josef Forster portrays himself as Shylock, the reviled play, The Merchant of Venice. (Nancy Montgomery/Stars and Stripes) 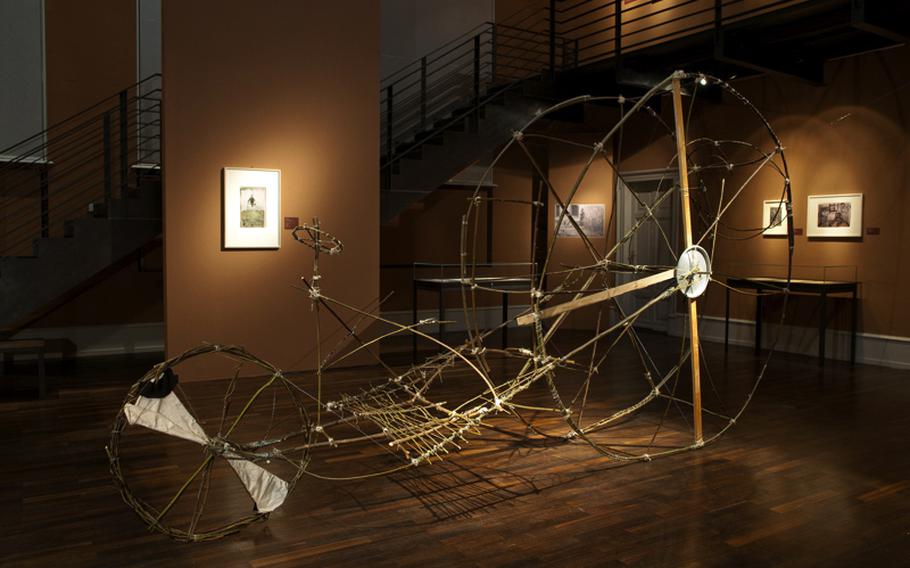 In addition to the paintings by Josef Forster, the exhibition at Heidelberg University's psychiatry clinic is a reconstructed version of a big wheel he made of branches. (Photo courtesy of Prinzhorn Collection) 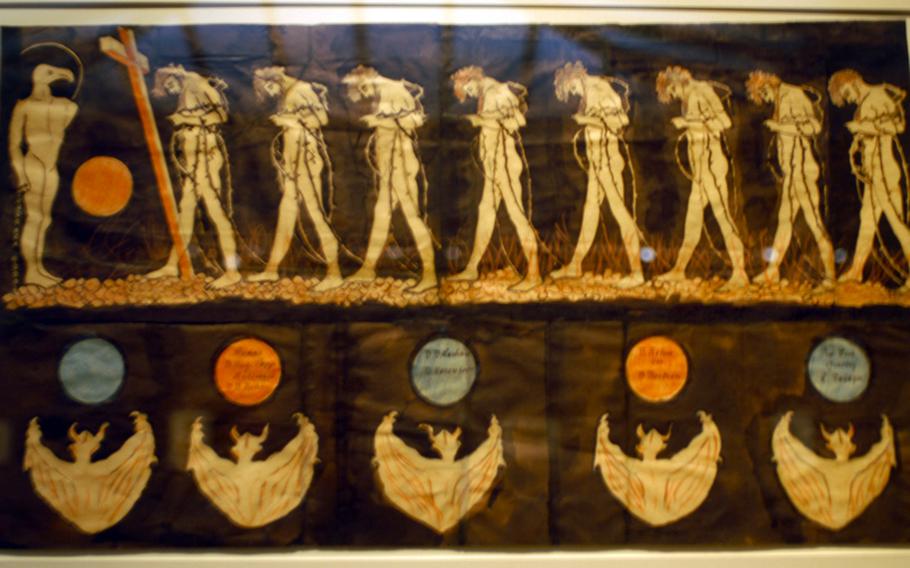 Franz Hamminger, who, like Josef Forster, was a patient at the Regensburg, Germany, asylum, painted his doctors, whom he blamed for his misery and imprisonment, being taken to hell by an Egyptian god. (Nancy Montgomery/Stars and Stripes) 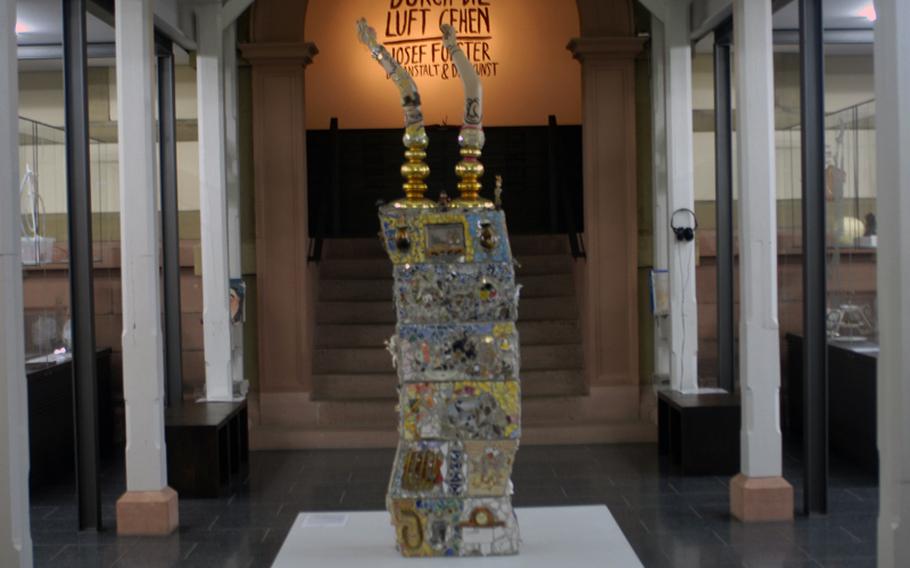 A mosaic-plastic sculpture called 2063 by Casim Wenzel stands at the entrance to the Prinzhorn Collection at the University of Heidelberg's psychiatry clinic. (Nancy Montgomery/Stars and Stripes) 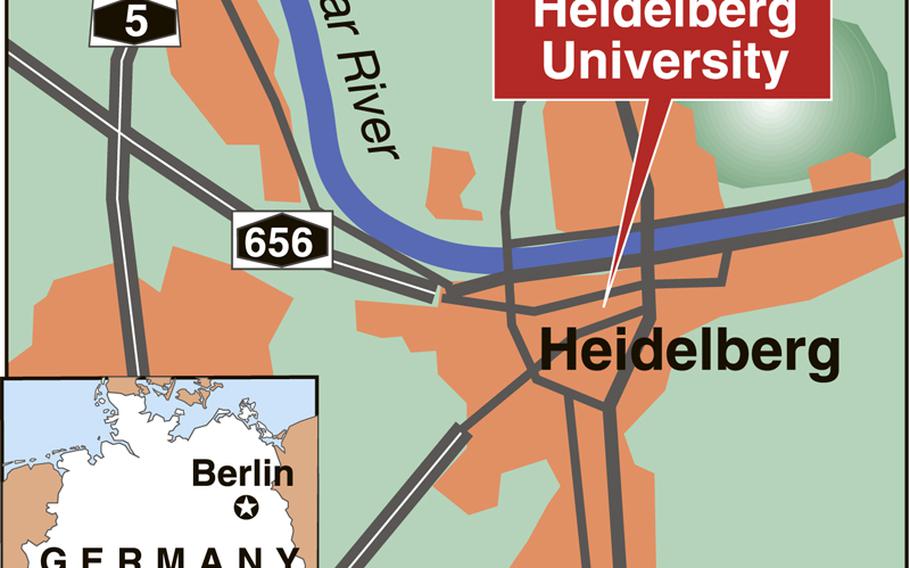 They give the term "tortured artist" new meaning. Mostly German, mostly men, often diagnosed with schizophrenia, they created art while confined in European mental institutions in the first part of the 20th century and often treated in ways considered barbaric today.

"Prinzhorn was in search of the origin of art, of expression, of feeling - the root of it," said Torsten Kappenberg, a collection tour guide.

The singular collection, with drawings, paintings and sculpture gathered until 1933, rediscovered in 1963 and exhibited in its own space since 2001, is designed to do more than display art.

"Our aim is also to tear down walls a little bit, between patients and people," Kappenberg said. "Patients from the clinic come here. And we have more and more visitors to the collection. Everyone knows someone who may have a (psychological) crisis."

Now through April 3, the exhibition features works by Josef Forster, a Regensburg wallpaper hanger and decorator born in 1878, who was admitted to the asylum at Regensburg in 1916 and diagnosed with schizophrenia. He was institutionalized after seeing a vision of a silent virgin he called "the blue wonder."

He spent 12 years at the hospital, developing as a painter and singer. "He created an astonishingly strong and highly expressive body of artwork, particularly his portraits of fellow inmates," according to the exhibition guide.

Forster, filled with feelings of being a sinner, yearned to become an "Edelmensch" or "noble human," with a weightless body that floats through the air and a singing voice "of an angel," Kappenberg said.

The way to achieve that, Forster thought, was to live on his own bodily excretions. Some of which he made into "cookies."

He wore a mask to keep his bodily essences from escaping from his nose and mouth and declined to bathe except in his own urine. "Other patients said he smelled like an animal," noted Gianna Wulf, a staffer at the collection. "Yet he was a great painter."

Works by other inmate-artists from Regensburg are included in the exhibit, notably two pastel paintings by Franz Hamminger. One is of two embracing women, one of whom holds a hypodermic needle. Its meaning is a mystery, Kappenberg said.

The other shows Hamminger's seven doctors chained and proceeding to hell, Kappenberg said, where the artist felt they belonged for imprisoning him.

The artworks were encouraged by a few German psychiatrists as a sort of early art therapy, Kappenberg said, in a brief period of enlightenment. In 1933, when the Nazis ordered the sterilization of people with schizophrenia, epilepsy, "imbecility" and other conditions they thought were inherited, that window closed.

By 1940, gray buses with blacked-out windows started appearing at mental hospitals to remove patients, Kappenberg said. Their artworks became examples of what the Nazis called "degenerate art" and were packed away or destroyed.

And at least 19 of the patients with artworks in the collection were exterminated, Kappenberg said.

DIRECTIONSHeidelberg is in western Germany, easily accessible off Autobahn 5 just to the north of where it crosses A6. The Prinzhorn Collection is at Voss-Strasse 2, about two blocks west of Bismarckplatz in downtown Heidelberg.

TIMESHours are 11 a.m. to 5 p.m. Tuesdays and Thursday through Sunday, from 11 a.m. to 8 p.m. Wednesdays and closed Mondays.

COSTSFive euros for adults, 3 euros for those qualifying for discounts. Guides conduct tours in German Wednesdays at 6 p.m. and Sundays at 2 p.m.

FOODA cafeteria is in the same building, and there are plenty of restaurants just blocks away in the city.

INFORMATIONThe phone number for the information office is 06221-564492; its website, in German only, is http://prinzhorn.ukl-hd.de. Text accompanying the artworks is also in German only, making them less accessible to English speakers, but guide Torsten Kappenberg said plans are to add English translations in the next few weeks.