Buy Photo
The view extends for miles at the parking lot of the Santuario della Madonna di Monte Berico, from the city of Vicenza to Monte Grappa, the foothills of the Alps and the Venetian Lagoon. (Nancy Montgomery/Stars and Stripes)

Buy Photo
The view extends for miles at the parking lot of the Santuario della Madonna di Monte Berico, from the city of Vicenza to Monte Grappa, the foothills of the Alps and the Venetian Lagoon. (Nancy Montgomery/Stars and Stripes) 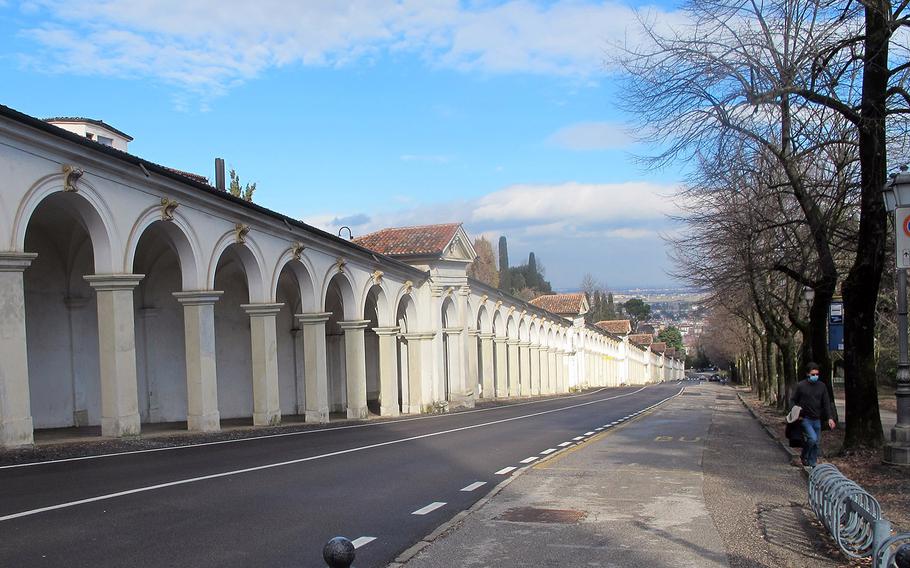 Buy Photo
The winding road up to the Santuario della Madonna di Monte Berico is popular with bikers and motorcyclists. Motorists can marvel at the 150 arches alongside the road meant to shelter pilgrims. (Nancy Montgomery/Stars and Stripes) Buy Photo
The Santuario della Madonna di Monte Berico, first built in the 15th century and rebuilt over the next two centuries as a tribute and offering to the Virgin Mary to save the faithful from the plague, stands high on a hill above the city. (Nancy Montgomery/Stars and Stripes) Buy Photo
A small park across from the Santuario della Madonna di Monte Berico honors mothers and the Alpini, the Italian Army's mountain troops known for their exploits in World War I. (Nancy Montgomery/Stars and Stripes)

Millions of pilgrims have made their way over the centuries up the hill from Vicenza to the Sanctuary of Saint Mary of Mount Berico, sometimes on their hands and knees.

The church, built originally in the 15th century to persuade Mary to use her influence with God to stop a plague resurgence, is a Marian shrine that overlooks the city.

Every first Sunday of the month, thousands have made the climb “to ask for a grace or to give thanks for having received one, or simply to pay a visit to the Virgin Mary,” according to 30 Giorni magazine. The church was open most days to tourists and worshippers alike.

The newest plague, the coronavirus pandemic, has put such pilgrimages on hold. The church is now closed weekdays.

But fitness devotees can still make the trek. Those up for the steep climb can arrive at the sanctuary via a 700-meter-long, two-sectioned archway built in the 18th century. The design, consisting of 150 arches, grouped in sets of 10, symbolizes various Roman Catholic traditions such as the 150 Hail Marys of the Rosary.

Another route begins at the “Arch of the Little Stairs,” designed by Palladio and built in 1596, which leads to 192 steps divided into 32 flights. It formed the only access path to the Sanctuary until the construction of the arcade made the hike easier.

It’s an altogether more leisurely drive, on a broad, winding motorway, eight minutes from the city center. The white marble church comes impressively into view, with the graceful arches off to the side.

Even the capacious parking lot — also called the Piazzale della Vittoria — is something to see. From there, a full view of the city awaits, along with views of Monte Grappa, the foothills of the Alps and the Venetian lagoon.

There’s also a little park with a sweet statue of a mother joyously holding aloft her baby and a toddler clinging to her hip. The title is “Grazie, Mama.”

The park, called the Garden of Victory, also features a monument to the Alpini, the Italian Army’s specialist mountain infantry, known for their World War I heroism.

Just up the street on the Viale Dieci Giugno is another bigger park on the grounds of the Museo del Risorgimento e della Resistenza. It’s a green, quiet space with trails laid among huge conifers and interspersed with sunny glades.

Directions: The church is at Viale X Giugno, 87, 36100 Vicenza. From the Tribunale di Vicenza, where there’s a nearby paid parking lot, there are several walking routes. Each, between about 1.5 miles and 2 miles, takes 20-30 minutes. A drive takes four minutes.

Hours: In keeping with pandemic rules, the church is currently open only for weekend mass.