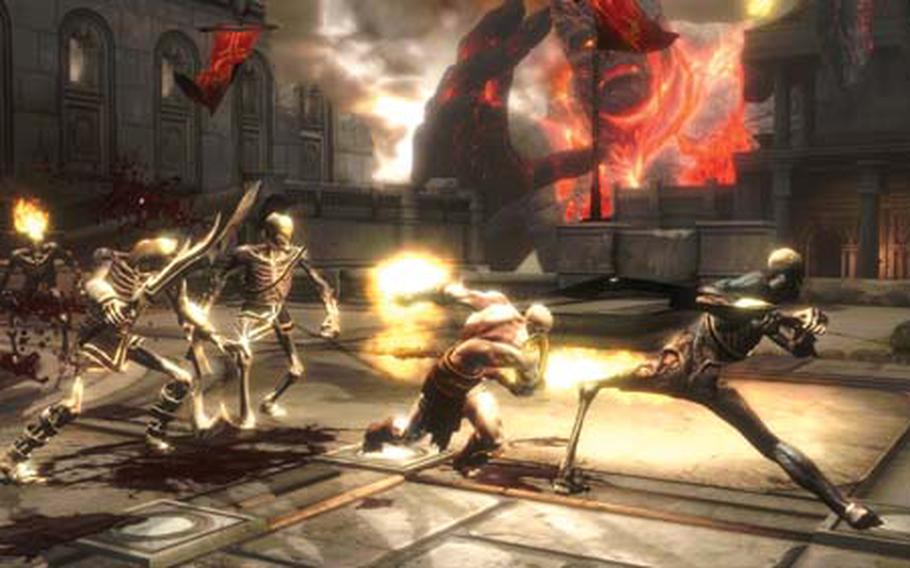 Kratos returns to wrap up his bloody action trilogy in “God of War III” on the PlayStation 3. (Sony)

I fought off hordes of undead soldiers while running across the vast body of a giant stone Titan. Then I faced off against Poseidon and his enormous, watery horse/scorpion/thing. After defeating Poseidon and causing a global flood, I was face to face with the man I vowed to kill, my father Zeus himself.

That was just the first scene of "God of War III." There is no doubt this is an action game of the highest order. This is the final chapter in the "God of War" trilogy and has my vote as the best.

The developers at Santa Monica Studios combined silky smooth graphics, near-perfect controls and a pace that would give a hummingbird a heart attack in the best game I have played this year.

Kratos, the main character, learns a few new tricks in this game and gets to play with new weapons and magic as well.

The game mechanics remain relatively unchanged from the previous editions of "God of War." Learning the combat system is easy, but is still a challenge to implement once the screen fills with bad guys.

Simply mashing buttons will not get you through the game. Learning to block, dodge and switch weapons on the fly is a must to truly get the most out of your butt-kicking experience. Changing weapons also changes your magic powers.

During some fights and cut scenes, on-screen prompts tell you button sequences to hit in order to advance. This is a returning feature and adds a nice mix in the otherwise fast-paced game.

Puzzles are scattered throughout the game. None is too complicated, but they do present enough of a challenge to give you a sense of accomplishment once you solve them. Some are even a little different from what I expected, like one using perspective to create paths reminiscent of "echochrome."

However, the game is not perfect. The story is pretty generic and doesn&#8217;t really get rolling till late in the game. This wasn&#8217;t a big deal to me. It would be like complaining that one of Sly&#8217;s movies didn&#8217;t have a great plot. Did you really come for the plot, or did you come for intense edge-of-your-seat action? If your answer was the latter, this game is for you.

I also wasn&#8217;t thrilled about the inclusion of a rhythm game section, but thankfully it was short and didn&#8217;t leave a bad taste in my mouth for very long.

Boss battles that redefine the word epic and visuals that best the best, make this game a must-have for action fans or anyone looking for the sweetest-looking game of the year (so far).