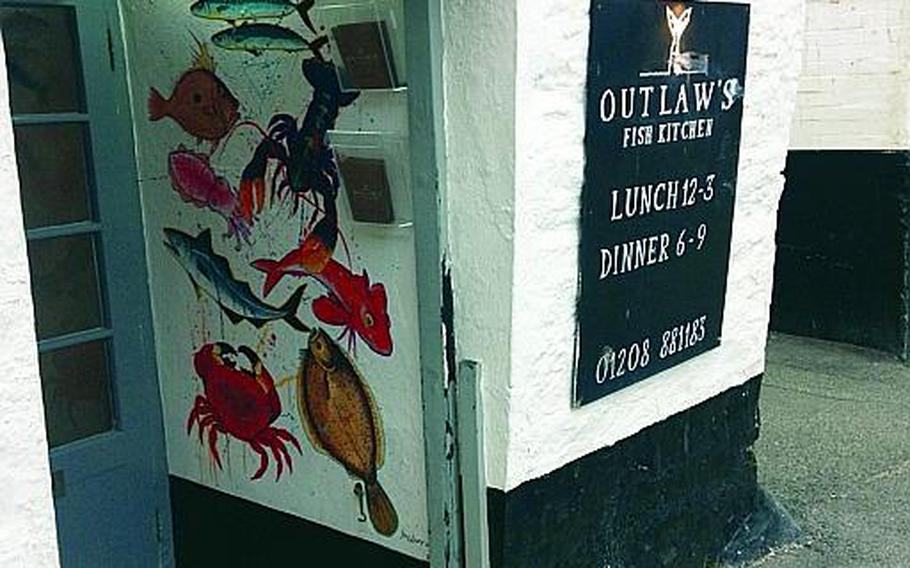 The fishing boats that bob in the harbor in Port Isaac, Cornwall, England, are more than a lovely backdrop for Great British Chef Nathan Outlaw. He depends on what they bring in every day to build his menu at his flagship, Restaurant Nathan Outlaw, and the more casual Outlaw's Fish Kitchen, both in the picturesque harbor town. (Courtesy of www.simonburtphotography and The Caterer) Great British Chef Nathan Outlaw makes his home in Port Isaac, Cornwall, and knows the port village's fisherman by name. His head chef spends much of the day communicating by phone with fishermen to find out what they've caught, and thus what will be on that night's menu. (Jolene Carpenter/Stars and Stripes) 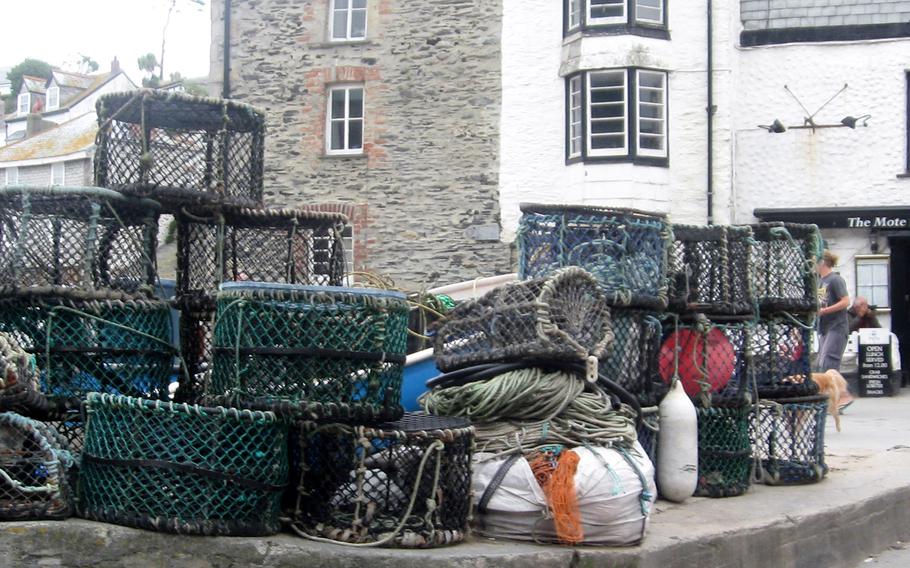 Sometimes the crabs and lobsters that come into Port Isaac in pots like these don't arrive until after 5 p.m., and diners are expected at Restaurant Nathan Outlaw at 7. "We've had instances when at 6:30 the crabs and the lobsters are just coming in," Nathan Outlaw says. "And we're thinking: We really need to get this fish! It's a little bit unruly. It keeps you on your toes." (Jolene Carpenter/Stars and Stripes) 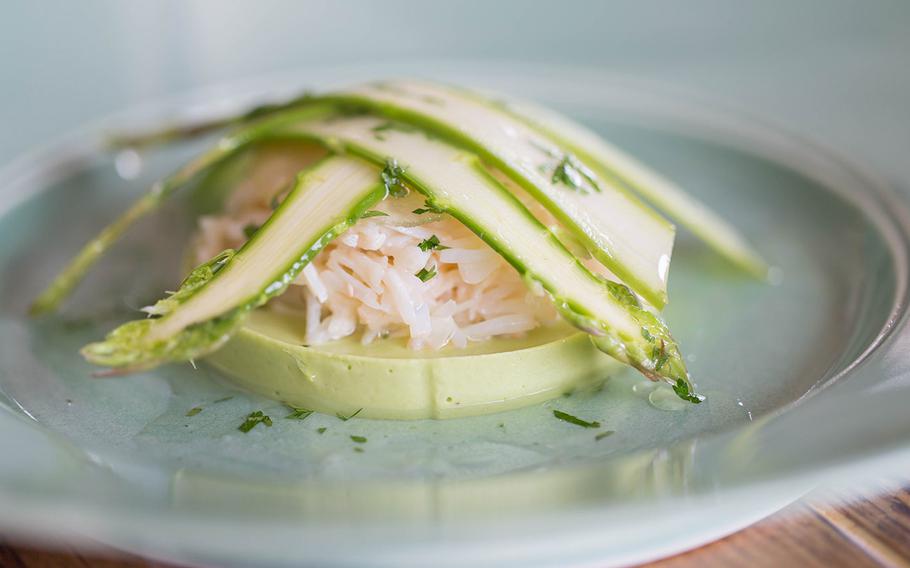 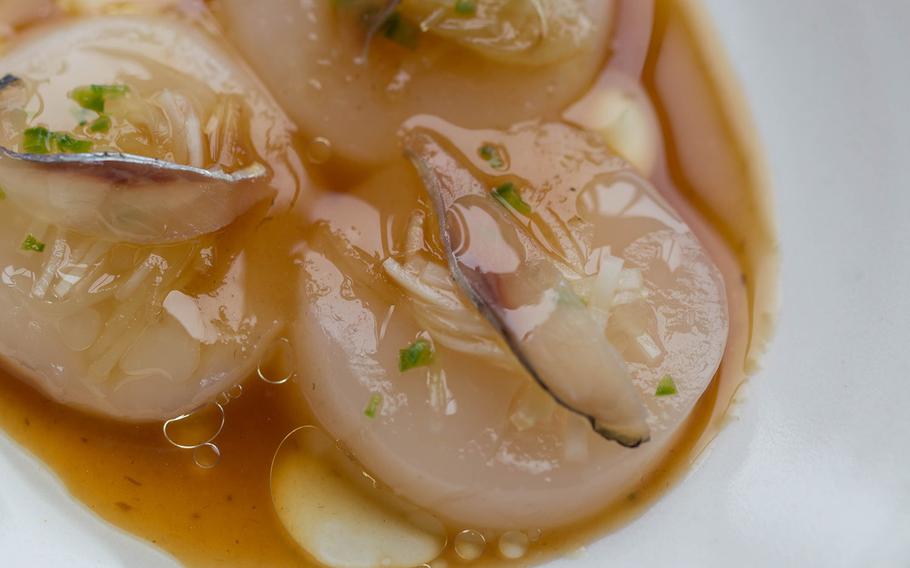 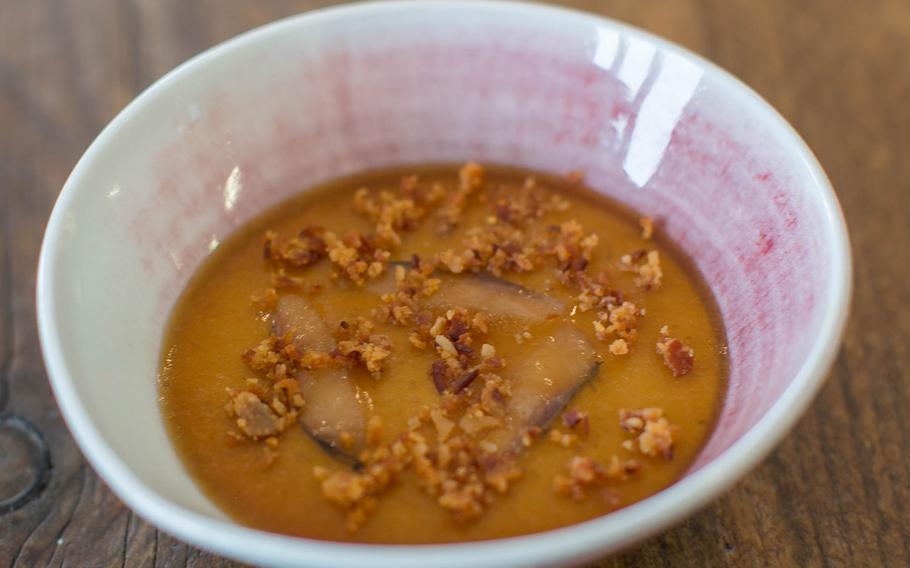 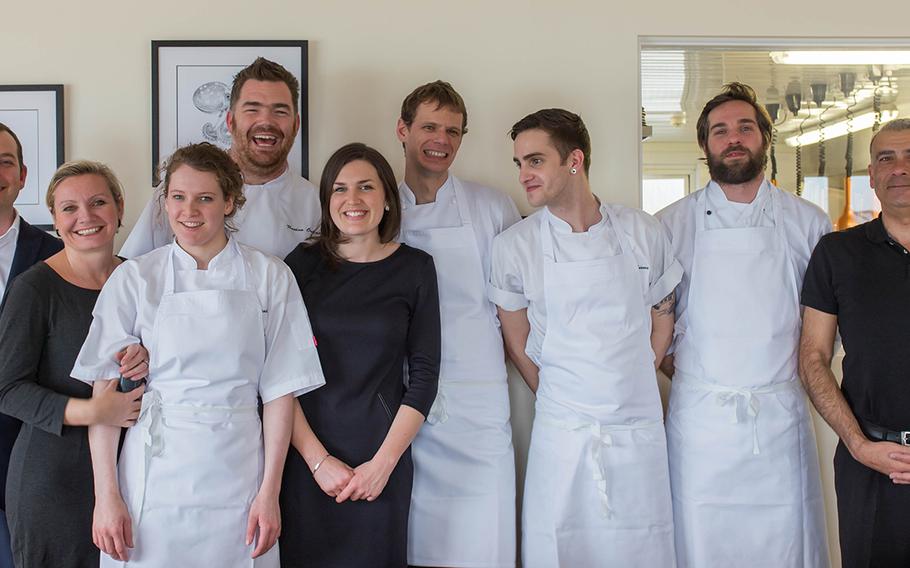 Great British Chef Nathan Outlaw, fourth from left, and his team at the two-Michelin-starred Restaurant Nathan Outlaw in Port Isaac, Cornwall, England. Some of the chef's crew have been with him more than 10 years. "I spend more time with these guys than I do with my own children," jokes Outlaw. (Courtesy of Nathan Outlaw)

Let’s say you have two dozen people coming over at 7 tonight who are planning to pay $150 for high-end dining. Now say that it’s 4:30 and you still don’t know what you’re serving.

Now move the clock to 6:30 and what you’re cooking isn’t even in your kitchen yet.

These scenarios are nothing new to British celebrity chef Nathan Outlaw, who at the young age of 37 has a string of credentials almost too long to list. He is the owner of four restaurants in England, including the Michelin-starred Outlaw’s at the Capital in London and the two-Michelin starred Restaurant Nathan Outlaw in Port Isaac. He founded a chef school called Academy Nathan Outlaw at Cornwall College and has authored several books, including “Nathan Outlaw’s British Seafood.”

While not as well known in the United States, Outlaw is becoming a household name in Britain. He’s included among the Great British Chefs at the website of the same name, and in 2014 won the AA Chef’s Chef award, an honor based on the votes of other high-profile British chefs. His flagship eatery, Restaurant Nathan Outlaw, is listed as fourth-best restaurant in United Kingdom in the 2016 Good Food Guide, a top-selling British restaurant review publication. The congenial 6-foot-5 chef is a regular on BBC cooking shows.

We met Outlaw at Restaurant Nathan Outlaw, which is perched on a bluff overlooking the Celtic Sea in Port Isaac. Fans of the long-running BBC comedy-drama “Doc Martin” know the village as the fictional Portwenn, where colorful boats seem to perpetually bob in a sunny harbor.

Those boats are more than pretty scenery to this chef. He depends on them to deliver what will be on the menu at Restaurant Nathan Outlaw and his second eatery in Port Isaac, the more casual Outlaw’s Fish Kitchen, which boasts its own Michelin star.

The tricky part is that he doesn’t know exactly when the boats will come in, what seafood they’ll be carrying and in what quantities.

“I want people to come here and recognize that what we do here is cook the best seafood,” says Outlaw. “It sounds quite simple, but it’s extremely not simple. The cooking is the easiest bit — the sourcing is the hardest part. My head chef spends all day long talking to or waiting for phone calls from fishermen or fish merchants. Sometimes we’ll get to 5 o’clock in the afternoon and we say, right, we’ve got to put a menu together for 7 o’clock. We’ve had instances when at 6:30 the crabs and the lobsters are just coming in. And we’re thinking: We really need to get this fish! It’s a little bit unruly. It keeps you on your toes.”

So, what if not enough seafood comes in? It has only happened once, Outlaw says, in the 12 years that he has had restaurants in Cornwall. In fierce storms last year, the boats could not go out, causing the restaurant to shorten its menu one evening. He preserves certain types of fish to help protect against shortages.

As if there weren’t enough variables to keep the cooking interesting, Outlaw also says the types of fish that are coming to the waters off Port Isaac are changing due to warming ocean currents. Cornwall’s location on the Atlantic Ocean in the Gulf Stream means it’s attracting more tropical fish from the Mediterranean, while cold water fish are going farther out to sea to search for cooler currents.

“You now get gilthead bream... 10 years ago they were not found in these waters,” he said. “You see a lot more tropical fish like red mullet and red gurnard. They are warmer-water fish. You get shoals of tuna, which is not something you see very often.

“I see so much more now, not in terms of the amount of fish, but the variety. Hopefully it’s a good thing. Warming is not good thing, of course, but you will see a lot more variety in the future, that’s for sure.”

Outlaw learned about the restaurant business as a child working with his father, also a chef. At age 8, the budding cook’s job was to butter the toast during the breakfast service. By 14 he was working in industrial kitchens part time. After college he worked in high-end restaurants in London and eventually Cornwall. In addition to his Port Isaac eateries, he also owns Mariners public house in nearby Rock. He consults at his London restaurant, Outlaw’s at the Capital in Knightsbridge.

“The reason I started cooking seafood is that I was passionate about fishermen and fish in general,” he said. “When I was a child, I spent a lot of time by the sea, and the actual job of the fisherman and also seeing how they caught the fish fascinated me. When I started cooking, I always went to the fish area of the kitchen. I find fish a challenge to cook even though I’ve been cooking for 20 years. That’s why I do it, I think. It’s the hardest thing to cook in the kitchen. It challenges me every day.”

Then there’s the flexibility quotient.

“Seafood comes in different every day, every wild fish is different, so you have to have the skills to be able to decide what to do with that species at that time when they’ve been caught,” he said.

Fish also changes consistency from the minute it’s caught. A fish caught in the morning can change texture within a few hours, he says.

Restaurant Nathan Outlaw offers a tasting menu of artfully presented seafood-based dishes for lunch and dinner as well as a set lunch menu. It seats a maximum of 24 diners, which provides an intimate dining experience with the wait staff taking time to chat. More importantly, the small number of diners allows Outlaw himself to cook most of what will be served, alongside his head chef and culinary team.

Another reason for limiting the number of diners — a philosophy he maintains at all of his restaurants — is sustainability. He said he sleeps well at night knowing his eateries are not responsible for over-fishing the waters surrounding Port Isaac.

“A lot of people — including my banker — say you should have a much bigger restaurant and make more money. But money is not what makes me happy. It’s being able to do what I want to do and have the freedom to do it every day. I’m very lucky.”

So, what is ahead for the celebrity chef who has put down roots with his wife, Rachel, and two children in beautiful but tiny Port Isaac? More of the same, he hopes.

“I hope that one day when I am an old man and my knees are hopefully not giving way that I will still be cooking behind that stove,” he said, motioning toward the kitchen at Restaurant Nathan Outlaw. “At the moment I have the energy to do more than one thing, but in my final days I think I’d love to just be cooking here and nowhere else. I became a chef simply to cook — I didn’t know there were Michelin stars ... I didn’t know there were awards for it; I just thought I really love cooking and that’s why I do it. Still to this day, I am never happier than when I’m filleting or cooking a fish. That's my favorite thing to do.”