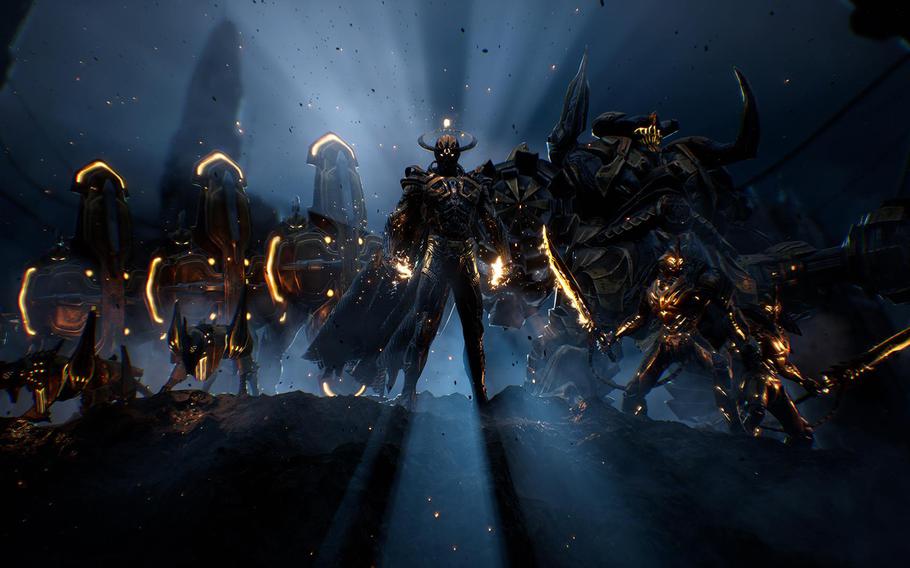 "Golem Gates" is still in Early Access, but the game that combines the notions of real-time strategy and collectible card-playing seems promising. (Laser Guided Games)

More than a few games over the years have attempted to meld real-time strategy and collectible card games. To date, none yet have really succeeded in marrying the two seemingly disparate genres.

Yet, the endorphin rush of opening packs of cards and the ego boost of pulling off a master strategic plan remains an attractive combination for developers.

Enter “Golem Gates,” the latest game that looks to extract the best qualities of those two genres, add a touch of MOBA flavoring and distill it all into one package.

“Golem Gates” is still in Early Access, so time will tell if developer Laser Guided Games can pull those elements together. Right now, the game is in a fairly early stage of its development — though it is em-inently playable.

You’ll step into the role of Harbinger, a being able to summon creatures and structures from the ae-ther to do its bidding. That’s translated in gameplay to a deck of glyphs (cards), each with a different unit or ability. Cards are broken down into structures, traps, units and techs.

Structures are your basic stationary defense towers, traps are self-explanatory, units are the control-lable critters and techs range from area of effect blasts to single unit buff/debuffs. As you play through the campaign and challenge maps, you’ll be able to unlock more glyphs.

To summon one, the Harbinger pulls from a pool of energy that replenishes over time. That pool of energy has a relatively small upper limit at the beginning of a map but can be expanded as you capture waypoints on the maps.

The Harbinger can summon to any area that is within line of sight of any of its units, which might be the best aspect of the game. In games of this type, usually you build a structure or have a unit that can summon within its general proximity. That leads to a more grindy, less fluid form of unit management.

In “Golem Gates,” setting up your defenses and chokepoints are left up entirely to you. Want to push out slow and set up a strong backend defense? You can do that. Me? I preferred to bum rush way-points and summon units further out to set up a more offensive frontline.

The maps are very MOBA-like, with lanes and chokepoints galore. You’ll very often be at one end of a map, with waypoints to capture as you march your units toward the other end. The ability to bring units to life almost anywhere also opens some unique mission structures like summoning across im-passable chasms.

As cards are played, they’re cycled out of play until the rest of the cards have been exhausted. Then you’re able to shuffle the cards back in — but in doing so, your Harbinger is left entirely vulnerable for 15 seconds. That’s important, because while the Harbinger has some offensive capabilities, its death means the end of the game.

Now, the game is still very young, so there are some definite balance issues that Laser Guided Games will need to iron out for this to become a great game.

As it stands now combat strategies are very limited. You summon more creatures than the enemy — you win. Micromanaging units isn’t really viable at this time as certain units are too slow to respond to clicks.

There are also rare circumstances where you’ve played all the cards you’re able to play and are stuck with a handful of techs that aren’t viable. Since there doesn’t seem to be a discard mechanic, you’re just stuck not being able to do anything. I feel if given the ability to discard — perhaps at the cost of not being able to cycle the discarded cards back into the deck — that issue could be alleviated.

My final, and perhaps biggest, complaint involves the overly dark visuals. Don’t get me wrong, I love dark and gritty game worlds. However, “Golem Gates” is simply too dark. Both the units and maps have an impressive techno-dystopian look — which is fantastic on its own. The unit viewer shows the great detail the art team put into every creature and tower. However, in gameplay, the units blend into the map far too easily.

When a scrum of units happens — as it does on every map in the endgame — it becomes difficult to tell what is going on. I’m not sure what the fix is here — lightening the units or keeping the maps a dif-ferent color palette than the units? — but something really needs to change.

Right now, I’ve only been able to play the challenge and storyline maps. There is an online mode, but considering its Early Access status, there haven’t been any matches to find as of yet.

“Golem Gates” still has a long way to go before it’s done. I’ve enjoyed my time with it so far and look forward to what Laser Guided Games has in store moving forward. They’ve already beefed up the sin-gle-player campaign, added tons of new glyphs and are very communicative with their supporters. They clearly care about the direction the game is going, and it shows.

The game is $29.99, which seems about average for an Early Access title. There is plenty of fun to squeeze out of the campaign and challenges, enough so that I’d feel as if I got my money’s worth out of the title.

I’m anxious to see what the online modes feel like — is the netcode up to snuff, is there any strategy beyond summoning more units than your opponent, and so forth. The fact that I look forward to spending more time with this title bodes well for an Early Access product.

If you’re into RTS/MOBAs, this is definitely worth a look — at the very least worth keeping on your watchlist to see how it turns out.