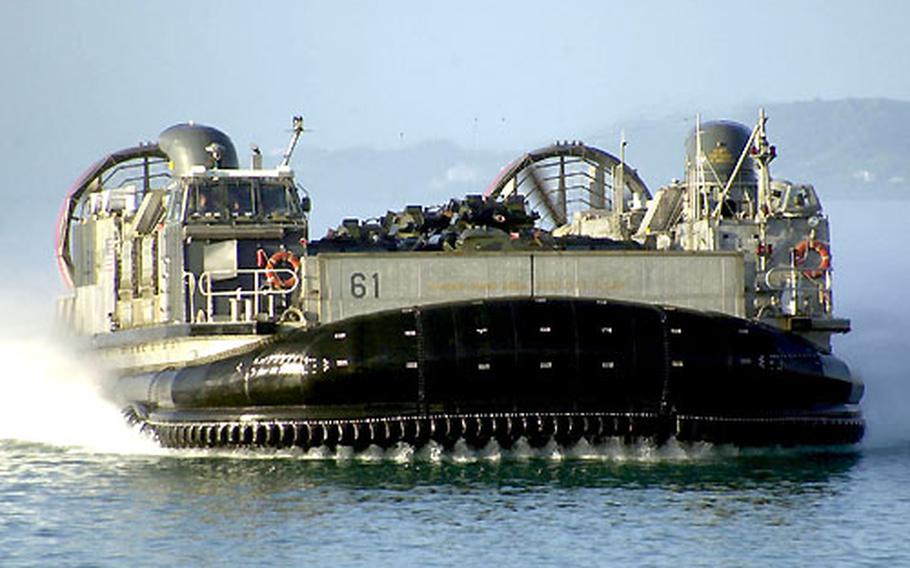 Navy Petty Officer 2nd Class Christopher Moore scans to the rear of the landing craft, air cushioned before sliding the the vessel off the beach and back to sea. (Mark Oliva / S&S)

But out here, on the open Pacific Ocean, he&#8217;s part grease monkey, part salty sea sailor and part captain of his own craft.

That&#8217;s just the driving part. Throw in navigation and parking the craft inside another ship or on just about any beach in the world.

Then there&#8217;s the maintenance. Moving parts tend to break. Salt water corrodes everything. Everything from military trucks to tanks has to be loaded in a specific order, not just for the way it will enter into battle but so the craft can ride over the sea&#8217;s pitches and swells. It&#8217;s nonstop work, evidenced by grease-stained flight suits and sweat-ringed T-shirts.

Moreau relies on the rest of his crew for everything. Load masters whose job is to get Marines and their gear on and off quickly, double as extra sets of eyes, scanning for obstructions and hazards on the water. Mechanics who fix and maintain the LCAC&#8217;s four turbo-prop engines also help pilot the giant hovercraft. A quartermaster works on Moreau&#8217;s LCAC as a navigator.

Moreau is part of Assault Craft Unit 5, attached to the amphibious assault ship USS Essex. But unlike other sailors on a warship, his sailors don&#8217;t dress daily in Navy blue but in the green flight suits adorned with unit patches, including the one on Moreau&#8217;s sleeve that shows a fun meter pegged out. They don&#8217;t stand watches and their daily routines keep them working on the craft, away from the humdrum of shipboard life.

But that doesn&#8217;t mean his sailors are slacking.

That teamwork produces a love affair with their craft. Moore said each LCAC has its own peculiar problems. He compared it to a shade tree mechanic&#8217;s obsession with working on a jalopy.

The same can be said of his crew, he added.