Get your veg on: Commissaries full of oft-ignored, healthful options 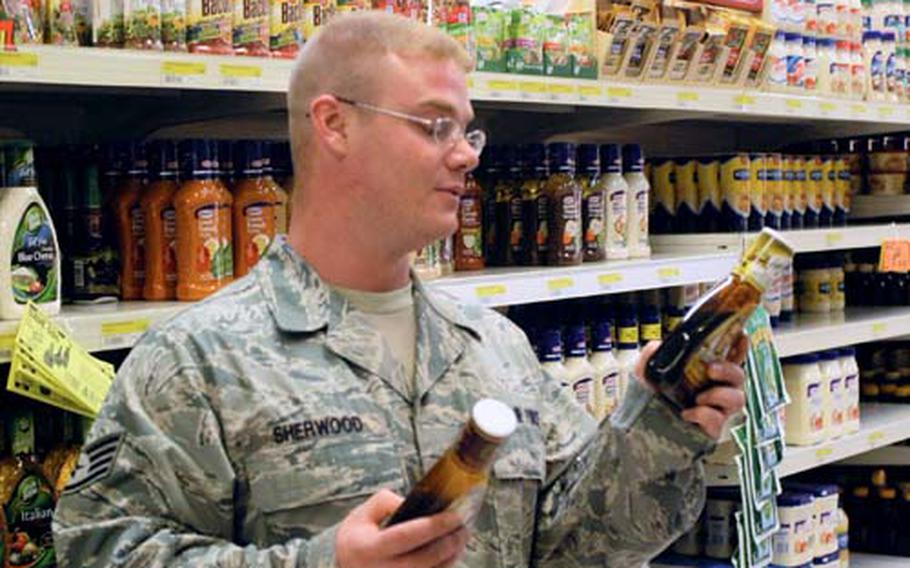 Staff Sgt. Phillip Sherwood compares the labels of two salad dressings during a Supermarket Savvy tour of the commissary at Aviano Air Base, Italy, last month. The base plans to offer such tours on a regular basis, joining other military facilities around the world that are trying to educate servicemembers and their families about smart food choices. (Kent Harris / Stripes)

Passing Vogel&#8217;s quiz might be a little tougher than meeting other recommendations offered by military dietitians and medical professionals. But several of them stationed in Italy &#8212; considered by many to have one of the planet&#8217;s more healthful diets &#8212; agree that many U.S. troops and their families could be doing more to ensure healthy eating.

Shopping at the commissary is a good place to start.

&#8220;It&#8217;s probably your best choice on base,&#8221; said Maj. Lora Pietszak, a registered dietitian and health promotion manager for the 31st Fighter Wing at Aviano Air Base.

It&#8217;s much easier to find more nutritious options in the commissary than in the local food court or even in many dining facilities, she said. But there is potential to stray because many shoppers buy packaged or processed food.

Lt. Cmdr. Bradley Karovic, a clinical dietitian and head of Combined Food Operations in Naples, said that most processed foods contain preservatives such as salt to allow them to stay edible longer. Those with high blood pressure are often told by medical professionals to lower their sodium intake.

Vogel, a doctor at the medical clinic in Vicenza, said many processed foods contain large amounts of sugars, starches or both &#8212; usually added to appeal to the taste buds.

Many products that claim to be healthful rely on various nutrients added during processing, he said. So why not go to a natural source for those ingredients, and save the wasted calories?

In most cases, Vogel said that means fruits and vegetables. During a recent trip to the commissary, he pointed out an array of &#8220;nutritional superstars&#8221; in the vegetable aisle: Broccoli, cauliflower, Brussels sprouts and cabbage contain not only vitamins and nutrients but also chemicals that help fight off diseases, he said.

So he estimates that 60 percent to 70 percent of a shopping cart should consist of fruits and vegetables.

Karovic isn&#8217;t willing to go quite that high. But he agrees with the principle.

&#8220;Americans are notorious for not eating an adequate amount of vegetables and fruits,&#8221; he said.

Taste and convenience are prime factors. Many vegetables require time preparing and cooking.

Those growing up in a fast-food culture have gotten into bad habits, Vogel said.

&#8220;It takes responsibility away from the individual,&#8221; he said, adding that a look at history could be useful. &#8220;Everyone, until fairly recently, was responsible for gathering their own food.&#8221;

Now it just takes a quick trip to the commissary.

Vogel said it&#8217;s not realistic for people to always make the best food choices and he doesn&#8217;t expect them to. He cooks most of his own meals, but occasionally drinks a soda or eats something he wouldn&#8217;t consider nutritious.