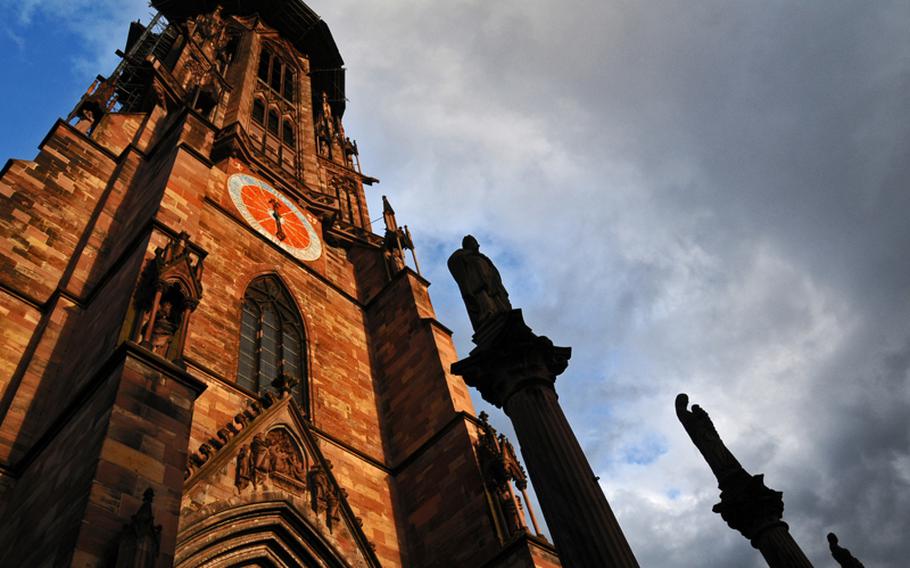 Buy Photo
Swiss historian Jakob Burckhardt called the steeple of St. Martin Cathedral the most beautiful in Christiandom. The steeple was completed during the Middle Ages, which is unusual since most church towers in Germany were built after that period. (Peter Jaeger/Stars and Stripes)

Buy Photo
Swiss historian Jakob Burckhardt called the steeple of St. Martin Cathedral the most beautiful in Christiandom. The steeple was completed during the Middle Ages, which is unusual since most church towers in Germany were built after that period. (Peter Jaeger/Stars and Stripes) 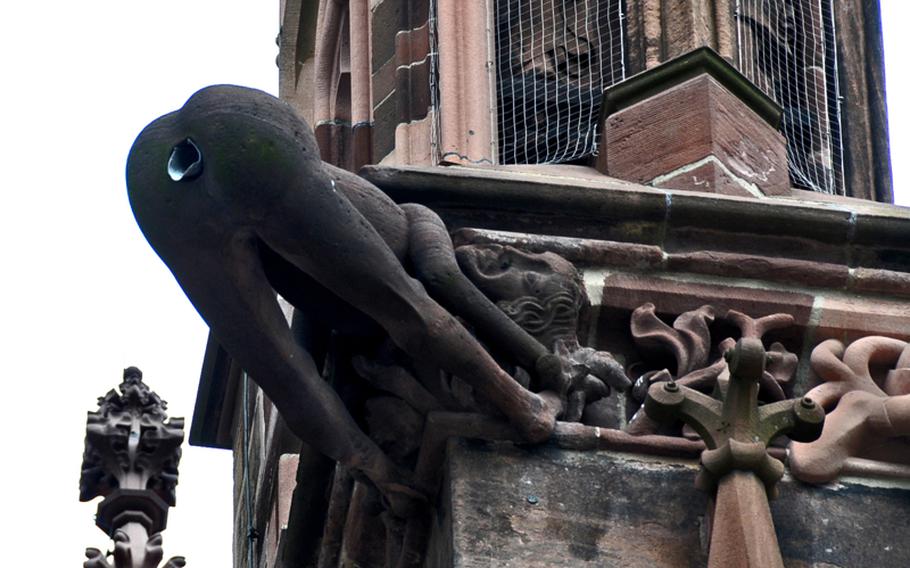 Buy Photo
An amusing detail of the cathedral is this bare-bottom human water spout, which, according to legend, was meant to be a slap in the face to Catholic Church leaders at the time the steeple was built. (Peter Jaeger/Stars and Stripes) 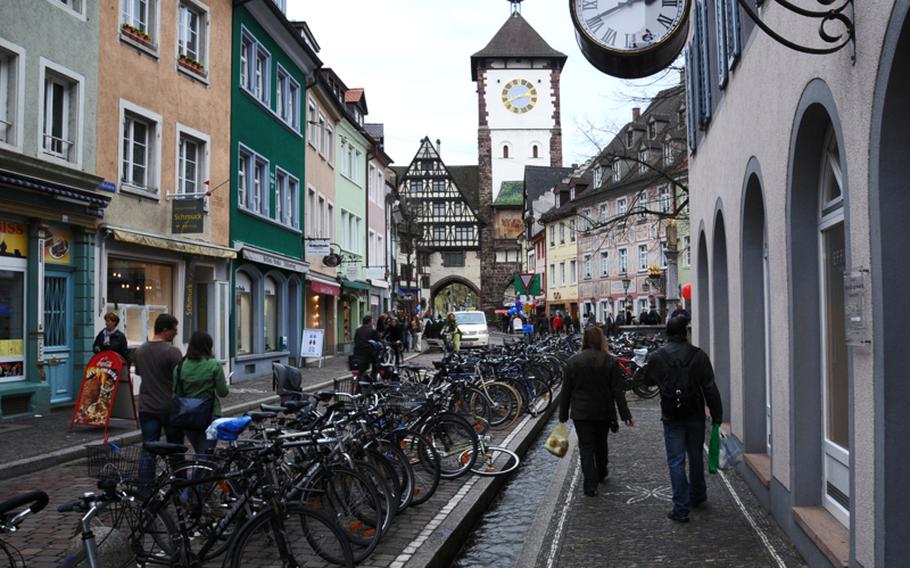 Buy Photo
Only pedestrians and cyclists are allowed in Freiburg's old town. Narrow canals crisscross the center of the city, adding even more charm to centuries-old buildings. Freiburg's oldest medieval gate, the Schwabentor, is in the background. (Peter Jaeger/Stars and Stripes) 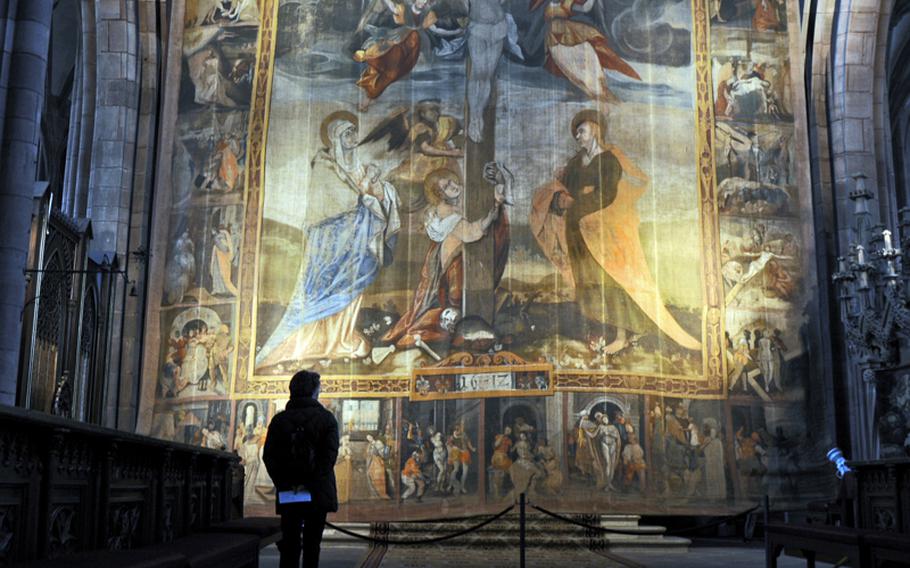 Buy Photo
This impressive 1612 tapestry, made by an unknown artist, is displayed inside St. Martin Cathedral only during Lent. (Peter Jaeger/Stars and Stripes) 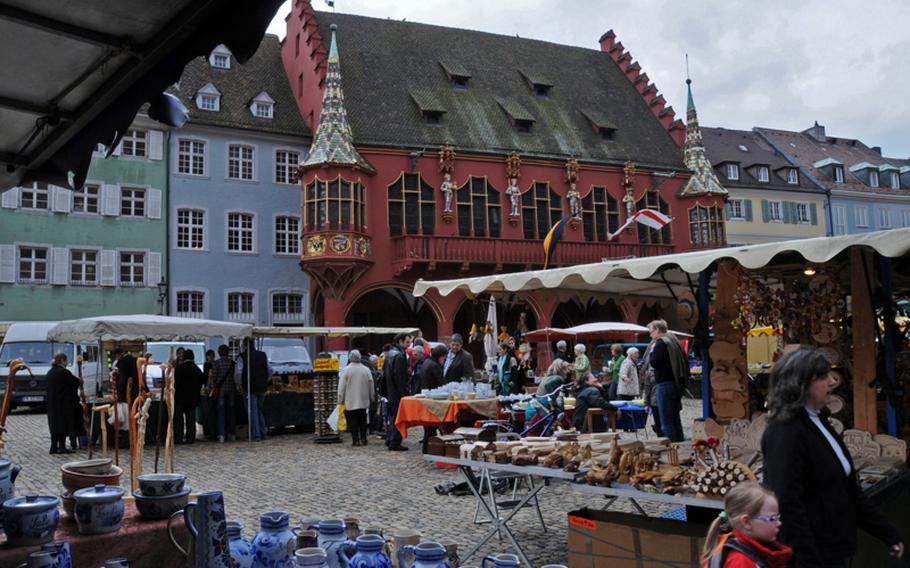 Buy Photo
An antique and flea market is held on Saturdays in front of the decorative building that centuries ago served as a finance and customs center in Freiburg. (Peter Jaeger/Stars and Stripes) 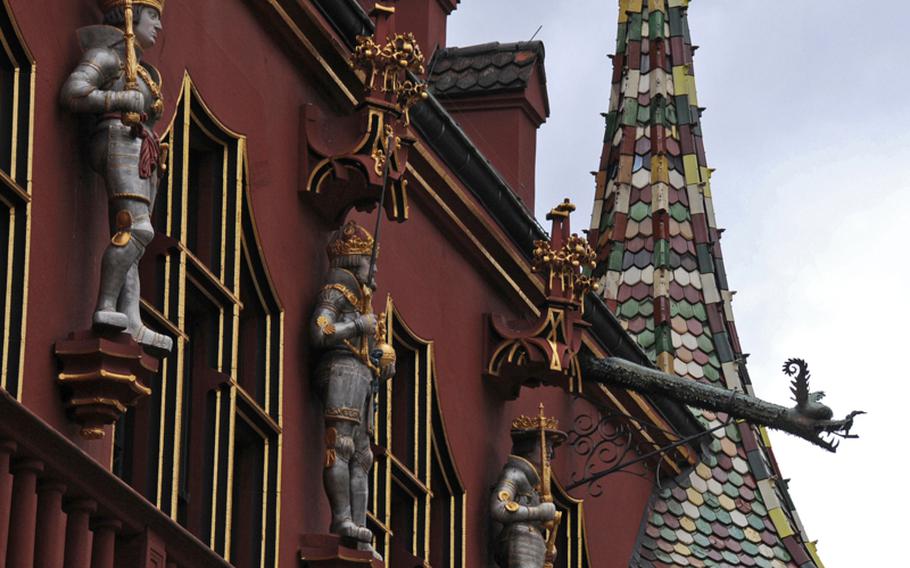 Buy Photo
The decorative facade of the medieval finance and customs center in Freiburg's old town. (Peter Jaeger/Stars and Stripes) 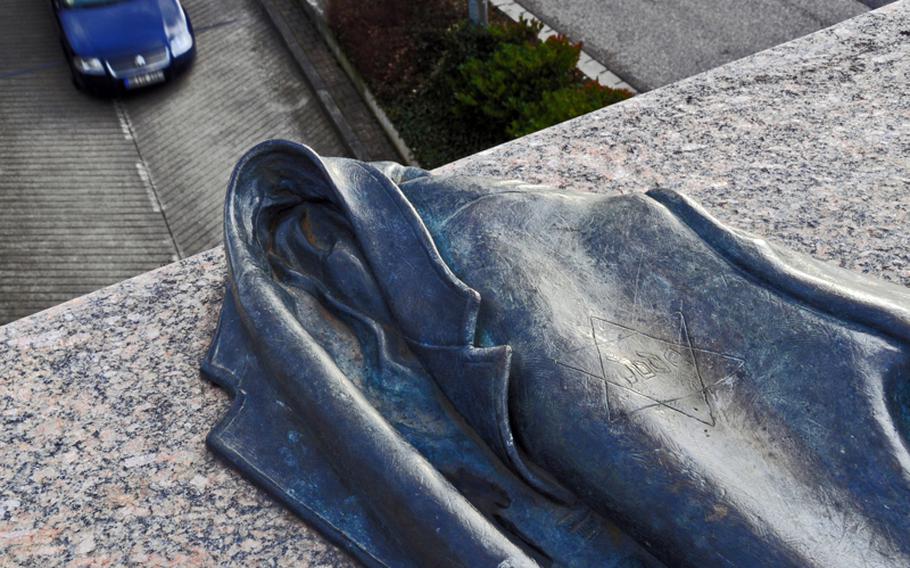 Buy Photo
An unusual sculpture on a bridge near Freiburg's train station honors the city's Jewish citizens who were deported by rail to Nazi death camps. (Peter Jaeger/Stars and Stripes) 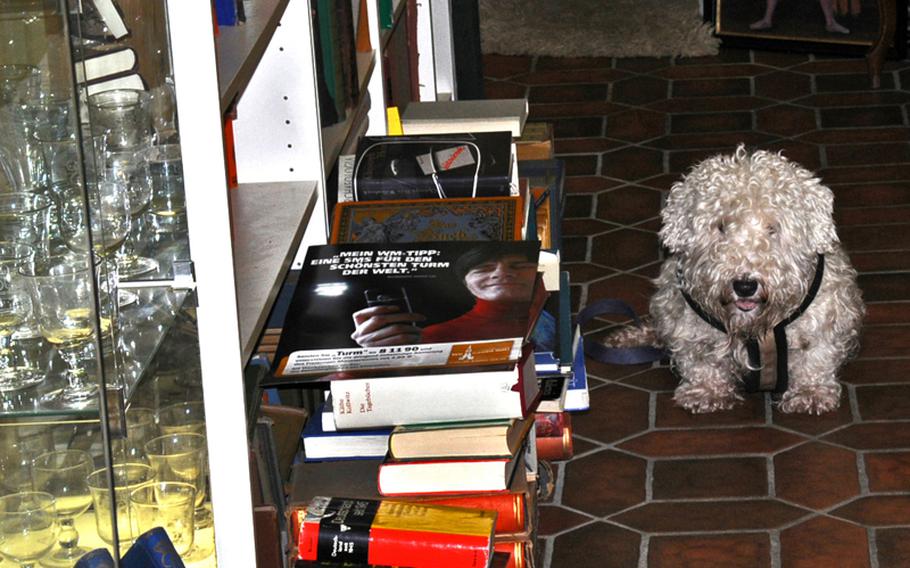 Buy Photo
Man's best friend guards the entrance to one of the many antique shops in Freiburg. (Peter Jaeger/Stars and Stripes) 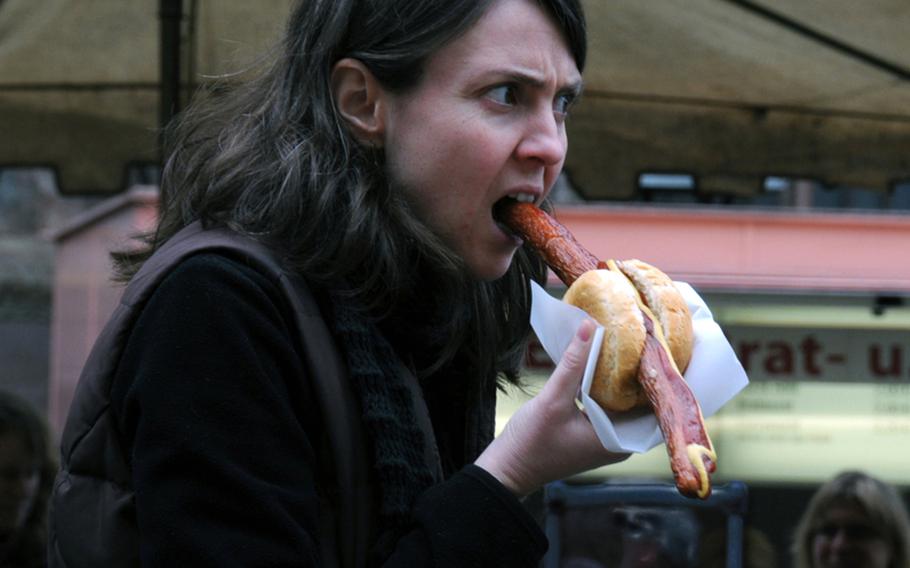 Buy Photo
A woman in Freiburg's market square bites into one of the city's specialties, a spicy bratwurst. (Peter Jaeger/Stars and Stripes) 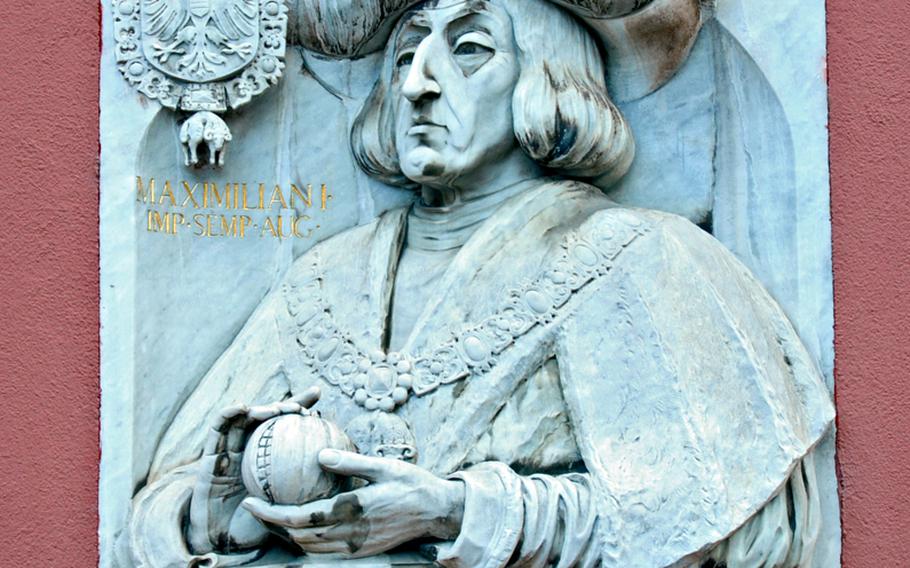 Buy Photo
Emperor Maximilian I lived in Freiburg and this marble sculpture decorates his former house. (Peter Jaeger/Stars and Stripes) 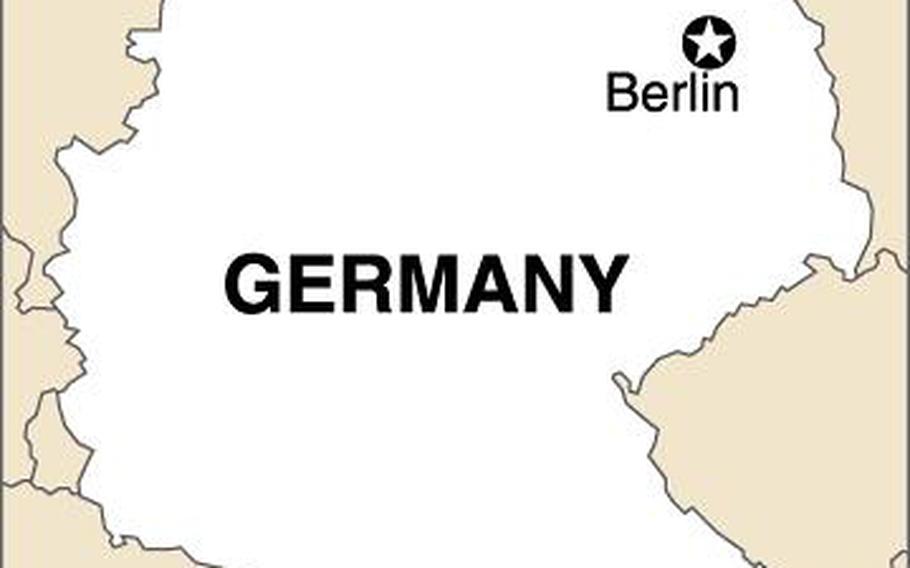 After taking a hearty bite of the long, red sausage, she smiled.

The sausage is a favorite here and several bratwurst stands in the shade of the impressive St. Martin Cathedral serve Freiburg&rsquo;s famed spicy specialty to hungry Saturday morning shoppers.

Luckily for the bratwurst stands, the M&uuml;nsterplatz marketplace at the cathedral is the favorite place to be every Saturday. Local farmers sell fresh produce on one side of the cathedral while craftsmen and antiques and souvenir stands open shop on the other side. The many restaurants and outdoor cafes overlooking the square are perfect places to observe the colorful and lively market. Sipping a local wine or beer while relaxing at one of the cafes is a good way to enjoy the weekly spectacle Freiburg-style.

Freiburg (freiburg.de) is an old city and a young city. Founded in 1120, it is now home to 25,000 students, giving the centuries-old city a young feel. History, youth and a warm, pleasant climate &mdash; combined with the fact that it&rsquo;s close to both France and Switzerland &mdash; create a lively atmosphere in one of the most attractive cities in Germany. It offers many scenic corners and picture-perfect angles, as well as a variety of stylish shops, cozy restaurants, outdoor cafes and unusual wine taverns. As a result, many Germans select Freiburg as one of their favorite cities.

While most of the main towers of German cathedrals were finished long after their buildings were completed in the Middle Ages, the magnificent St. Martin tower was completed during the Middle Ages. The majestic filigree steeple, 370 feet high, was called by Swiss historian and author Jakob Burckhardt &ldquo;the most beautiful in Christiandom.&rdquo;

Looking up the eastern side of this Gothic jewel, you might be surprised to see a sandstone sculpture bending over and aiming his bare behind &mdash; which acts as a water spout &mdash; in the direction of the building that housed the Catholic church&rsquo;s leaders at the time. According to some historians, the sculpture was meant to be an in-your-face, thanks-for-nothing gesture from the indignant Freiburgers, who had to build and finance St. Martin themselves with no financial help from the church itself.

The cathedral dominates the area around M&uuml;nsterplatz, but other sites await curious visitors. A striking medieval warehouse, constructed between 1520 and 1532, is a good example. The dark-red building decorated with golden figures served as the finance and customs center.

And three-centuries-old gates &mdash; the Schwabentor, the Martinstor and the Breisacher Tor &mdash; beckon visitors to enter the old town. The Breisacher Tor is the only surviving gate built during the French occupation in 1677.

An attractive feature of Freiburg&rsquo;s old town are the small canals, called Freiburger B&auml;chle, that flow alongside many streets. Most likely they were used originally as sewers and to provide craftsmen with water. Today, the clean and decorative canals attract children and adults alike.

But be advised: Legend has it that if you step in one of them, you must return to Freiburg one day.