For former National Guardsman, work is now a three-ring circus 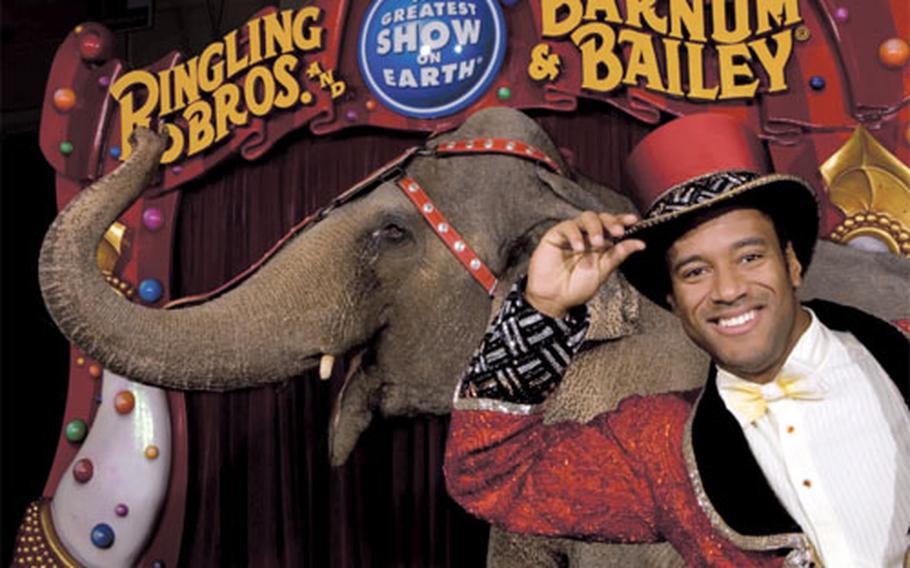 Tyron McFarlan Jr. gave up his Army greens for a ringmaster’s top hot and tails. He has been with Ringling Bros. and Barnum & Bailey Circus for the past two years. (Courtest of Ringling Bros.)

After 13 years in the Army National Guard, McFarlan, then a captain, decided he wanted to do something completely different. He wanted to sing, perform and dance.

Then, he found the job advertisement of a lifetime &#8212; Ringling Bros. and Barnum & Bailey Circus needed a ringmaster.

McFarlan nailed the audition, was offered the job, and promptly ran away with the circus.

Those who knew the top-hatted ringmaster when he wore a greener uniform might say he was a natural for the job. McFarlan, 35, says that in the military, he was always finding a way to perform, whether in worship services on base or calling cadence on runs.

Now he drills the clowns much like he would a group of soldiers.

During the performance, McFarlan marches his troupe of florescent-haired, oversized-shoe-wearing recruits through an exercise regime of sorts, all the while assuring the audience that, as a former soldier, he knows exactly what he&#8217;s doing.

As the show&#8217;s 34th ringmaster, McFarlan is also the face of the circus&#8217; red tour, one of three Ringling Bros. troupes that crisscross the United States.

McFarlan credits his military career and a few tips from his father, who retired as a chief warrant officer in the Army, with giving him the discipline and training to become a ringmaster.

&#8220;Being conscious of time and being at a particular point at a particular time on the floor, and considering the fact that I have 9,000-pound elephants walking around me, a lot of the discipline I learned in the military helped me with being a ringmaster,&#8221; McFarlan says.

His military background is an instant connection between McFarlan and many audience members he meets.