'First in Flight' debate heats up during Wright Brothers centennial 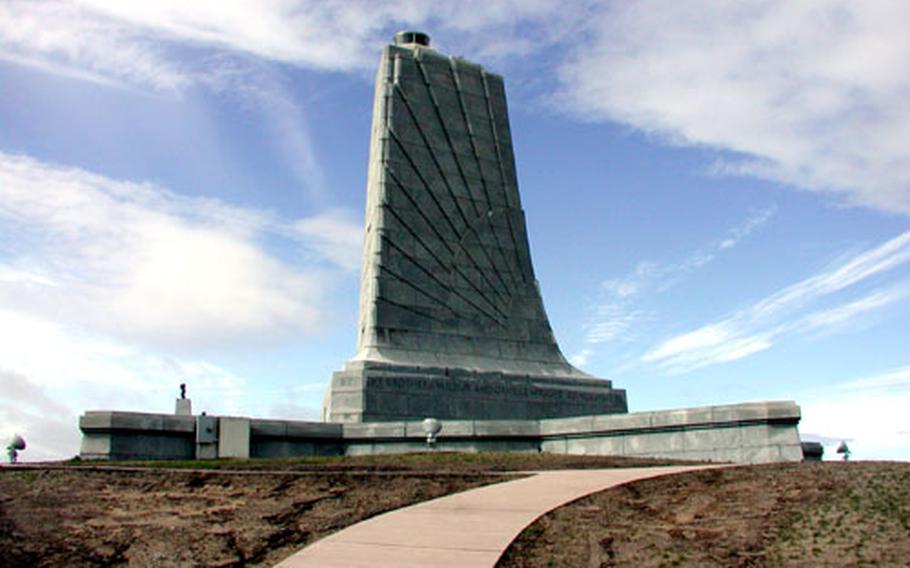 A monument to the Wright brothers at Kill Devil Hills N.C., the site of the first airplane flight 100 years ago this December. (Joe Gromelski / S&S)

A monument to the Wright brothers at Kill Devil Hills N.C., the site of the first airplane flight 100 years ago this December. (Joe Gromelski / S&S) 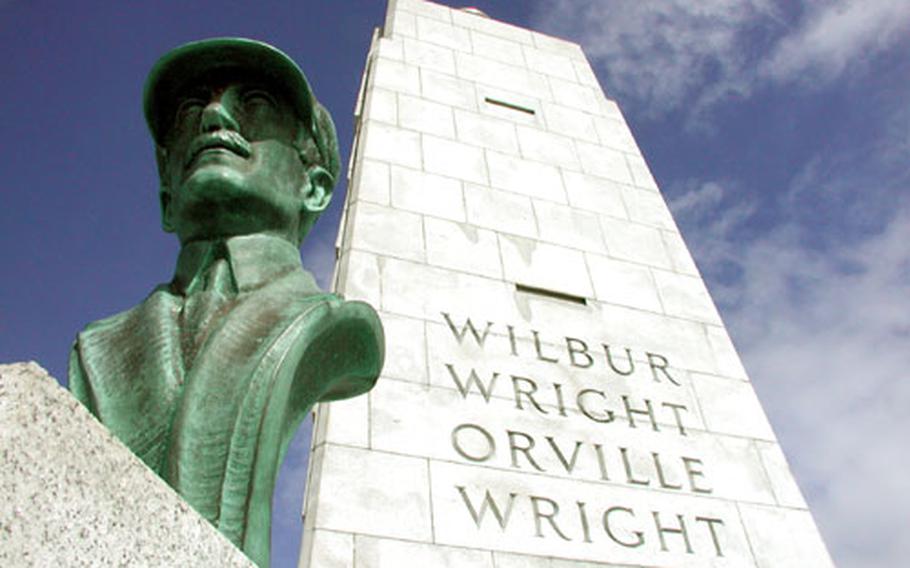 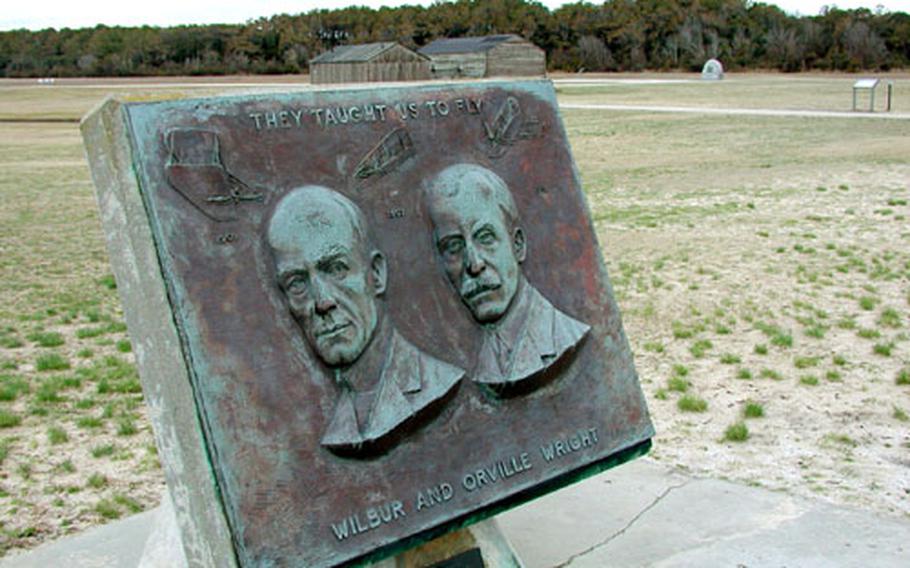 A plaque honoring the Wright brothers at Kill Devil Hills. In the background is the field where Orville made the first airplane flight 100 years ago; the buildings are recreations of the sheds where the brothers lived and stored their plane. (Joe Gromelski / S&S) 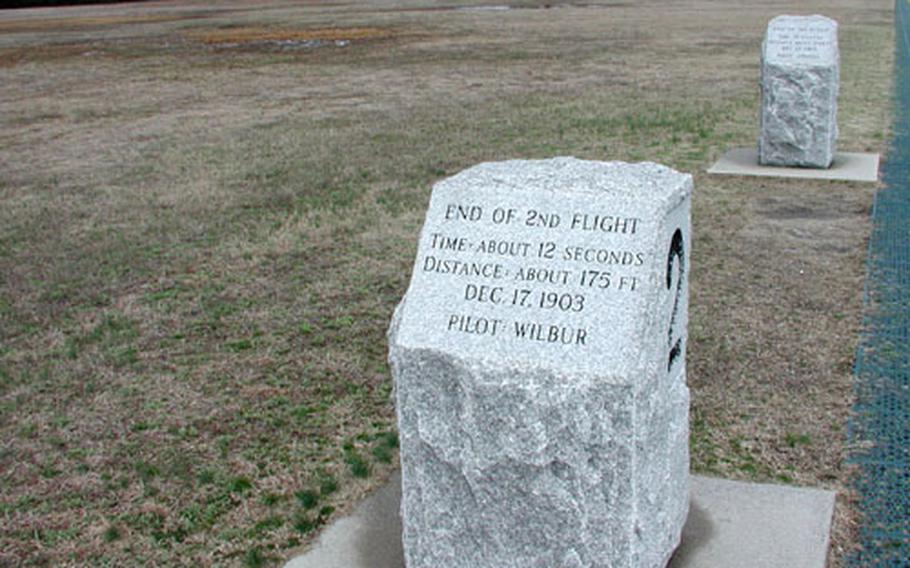 An added attraction has been a minifeud between the two areas over which can call itself the birthplace of aviation.

When Congress voted overwhelmingly last month to pass a resolution giving the title to Dayton, North Carolina Rep. Robin Hayes (who was one of the three &#8220;no&#8221; votes in the House) commented that &#8220;the Wright brothers made their first flight at Kitty Hawk. The last time I checked, Kitty Hawk is still in North Carolina, not Ohio.&#8221;

Rep. Dave Hobson, according to an Associated Press story, retorted that &#8220;no one disputes the fact that Kitty Hawk in North Carolina was the site of the first successful controlled, powered flight. &#8230; However, Dayton, Ohio&#8217;s claim to be the birthplace of aviation is based upon much more than just the first flight.&#8221; He added, &#8220;The intellect and the ingenuity came from Dayton. The wind came from North Carolina.&#8221;

Indeed, it&#8217;s hard to argue against Dayton being a hotbed of invention. The city&#8217;s Web site lists among the Dayton- based inventions such items as cellophane tape, the heart-lung machine, gas masks, the parachute, parking meters, leaded gasoline, pull-tab beverage cans, the automobile starter, the movie camera and projector &#8230; the list goes on. Even though one could argue that Wright-Patterson&#8217;s military research functions contributed a great deal, the base &#8212; as Rep. Hayes might put it &#8212; is still in Ohio.

Kitty Hawk, on the other hand, has a big plus in its column: When the Wrights were ready to test their invention, they scoured the East for the right conditions. No location seemed better than Kitty Hawk &#8212; or, more precisely, Kill Devil Hills, a sandy area about a half-mile inland from the beach. But the experiment started off with way too much wind; Wilbur Wright got caught in a September 1900 hurricane as he took what turned out to be a harrowing two-day boat ride to Kitty Hawk as he prepared to set up shop. Had the boat gone down, the current debate might have been between Dayton and somewhere else.

Today, a large monument to the brothers tops Big Kill Devil Hill, a now-stabilized 90-foot-high sand dune that provided a launching platform for experiments. (In 1903, it was closer to the field where the flights took place, but over the years the pile of sand drifted south to its present location.) On the level area below, monuments mark the starting point of the first four flights made on that December day: The first covered about 120 feet, but the last touched down after 852 feet and lasted nearly a minute. Less than seven decades later, men walked on the moon.

In spite of the dispute over who gets to claim the title &#8212; which, really, comes off as the kind of bluster long employed by Hollywood press agents to grab a little ink &#8212; there is a spirit of cooperation and a network of events around the country to mark the anniversary, many of them interconnected. The U.S. Centennial of Flight Commission&#8217;s Web site at www.centennialofflight.gov/index2.cfm provides an overview of events nationwide.

This weekend falls in the middle of the city&#8217;s main celebration. It includes a gathering of several blimps at the Air Force Museum. Next weekend, there&#8217;s a large air show on the schedule. A Dayton-to-Kitty Hawk bicycle tour is scheduled in August, and a kite festival in October. The &#8220;Inventing Flight Web site,&#8221; with schedules and other information, is at www.inventingflight.com/index.php. Other information can be found on the City of Dayton&#8217;s Web site at www.daytonohio.com.

Several days of flight-related events in December will be capped off by a re-enactment of the first flight at Kill Devil Hills. Many of the leading names from the world of aviation are scheduled to attend.

Beginning in October, the Smithsonian&#8217;s Air and Space Museum will feature a special 100th anniversary exhibit. The original Wright brothers plane, normally suspended from the ceiling, will be displayed at ground level. For details: www.nasm.si.edu/galleries/gal209/wrights.htm