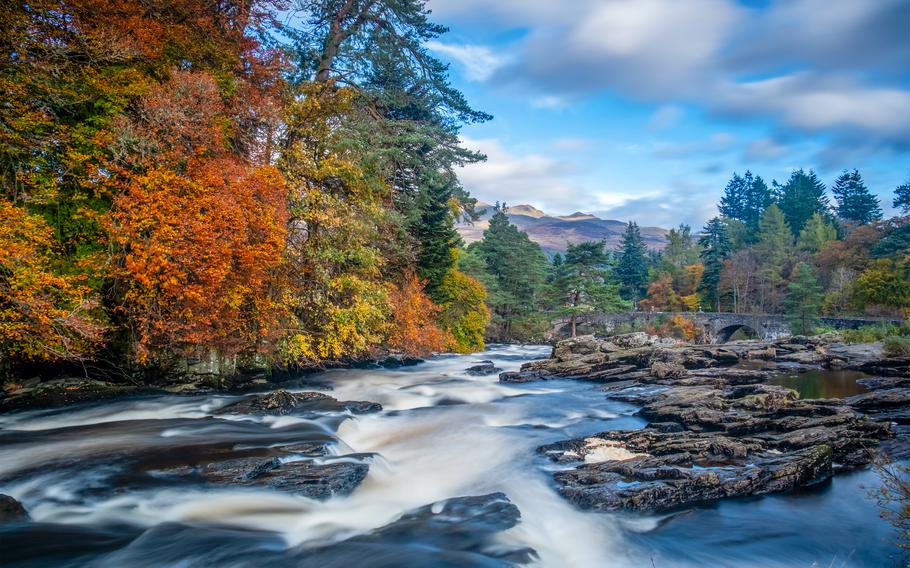 The Falls of Dochart, at Killin in Scotland, make for a dramatic autumn destination. (iStock)

As the days grow shorter and a chill creeps into to the evening air, Europe’s natural spaces prepare to give us one last show. While Scandinavia’s northernmost forests are already starting to turn by the latter half of August, some countries of the Mediterranean reach their peak glory only in late October. The exact dates as to when nature’s most stunning displays of colors reach their peak vary slightly from year to year, but wherever one might roam, the shoulder season, with its lower hotel prices, fewer travelers and relaxed pace, makes an ideal time for exploration of Europe’s unspoiled corners.

Finland: With roughly two-thirds of its land covered in forest, there are few places a would-be leaf peeper could go wrong. Whereas Helsinki and other points south reach their peak colors in late September or early October, northern Lapland starts its annual march to autumn much earlier, and for roughly two weeks in mid-September, the reds, yellows and auburns are at their dazzling best.

“Ruska” is the Finnish word for fall foliage; but in a country blessed with so much of it, two terms are used to describe different aspects of it. Puuruska refers to the leaves on the trees turning color; maaruska refers to the bushes and plants on the ground taking on their vibrant fall shades.

As home to the largest ski resort in the country, Ruka, in Lapland, offers a well-developed infrastructure for visitors. The region offers a variety of activities throughout September, including hiking, cycling, river rafting and photography safaris. Nearby, the internationally recognized Kuusamo Nature Photo Festival takes place Sept. 10-12. Other reasons to visit Lapland this time of year include berrying, mushroom-picking and catching sight of the Northern Lights. Online: ruka.fi/en/autumncolours

Scotland: From mid-September, Scotland’s autumn palette wows with shades of red, orange, bronze and crimson. Among the many areas recommended by Visit Scotland are found this trio of destinations: Killin, on the edge of Loch Lomond and the Trossachs National Park, particularly the Falls of Dochart after a drenching rain; Lady Mary's Walk, in Crieff, Perthshire, where beeches are accompanied by poetry; and Queen’s View, by Loch Tummel in Perthshire, which takes its name from a queen who visited 500 years previously. Online: tinyurl.com/zbupcc

England: Maples, mountain ash and beech make for splendid colors of display and are found throughout the land, but for something a little different, make way to the Wicken Fen Nature Reserve in Wicken, Cambridgeshire, the National Trust’s oldest nature reserve and England’s most famous fen. As summer wanes, the wetland landscape turns various shades of russet, which look all the more dramatic beneath a setting sun. The chance to spot owls and birds of prey as they migrate south is an additional attraction. Online: nationaltrust.org.uk/wicken-fen-nature-reserve

Germany: While the country’s “Golden Autumn” might lack the breadth of palette seen elsewhere, there are many places to bask in the glory of the season, from the Alps to the islands of the North Sea. While there’s no bad time to experience the unique landscape of the region known as Saxon Switzerland in the east of the country, the bizarre sandstone rock formations by the Elbe River are set off spectacularly by the yellow and orange leaves. The Malerweg, or Painter’s Way, is a 72-mile trail leading past some of the region’s most famous landmarks including the Königstein Fortress and Bastei Bridge. Online: tinyurl.com/238c6zas

Switzerland: Beeches, birches, larches and maples are the major characters in the autumnal pageant of colors. The Swiss Tourism website page features a foliage tracker informing travelers when and where the show of colors is presently at its best. An interactive map showing the current and predicted foliage colors is updated weekly from mid-August to early November. Destinations coming into their own this time of year include Deborence and the Aletsch Arena in Valais, the Jura High Trail, Graubünden and the chestnut forests of the Lugano Region. Online: tinyurl.com/2j8jd58

Italy: From mid-September through the end of October, much of the country basks in gentle warmth and muted colors. Places to see this time of year might include the larch forests around Sorapiss, Fedora or other lakes in the Dolomites; the Mugello area in Tuscany, where the chestnut harvest season gives birth to many “sagra” food festivals honoring specific dishes, or Le Marche, where truffles and mushrooms are celebrated this time of year.