Silverstone Circuit: Test the track at one of Britain’s leading racing venues 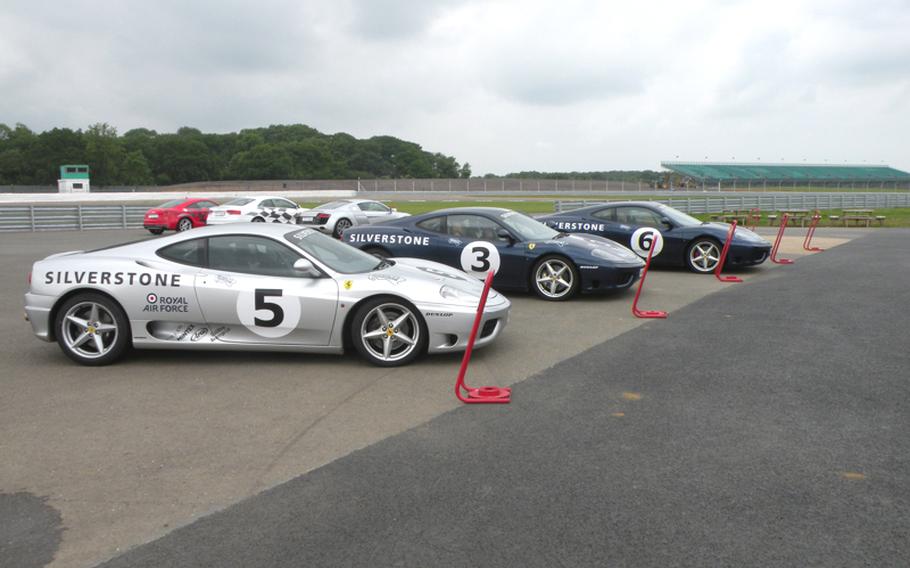 Silverstone Circuit has several track-ready Ferrari 360se for customers of all skill levels to use during what the circuit calls 'driving experiences.' It also has several other types of vehicles available as well. (David Hodge/Stars and Stripes)

Silverstone Circuit has several track-ready Ferrari 360se for customers of all skill levels to use during what the circuit calls 'driving experiences.' It also has several other types of vehicles available as well. (David Hodge/Stars and Stripes) The track-ready KTM X-BOW is lightweight thanks to its carbon monocoque frame, technology that is standard in today's Formula 1 cars. It has no doors, roof or windshield and can reach 100 kilometers per hour -- about 62 mph -- in 3.9 seconds, according to the KTM's website. (David Hodge/Stars and Stripes) 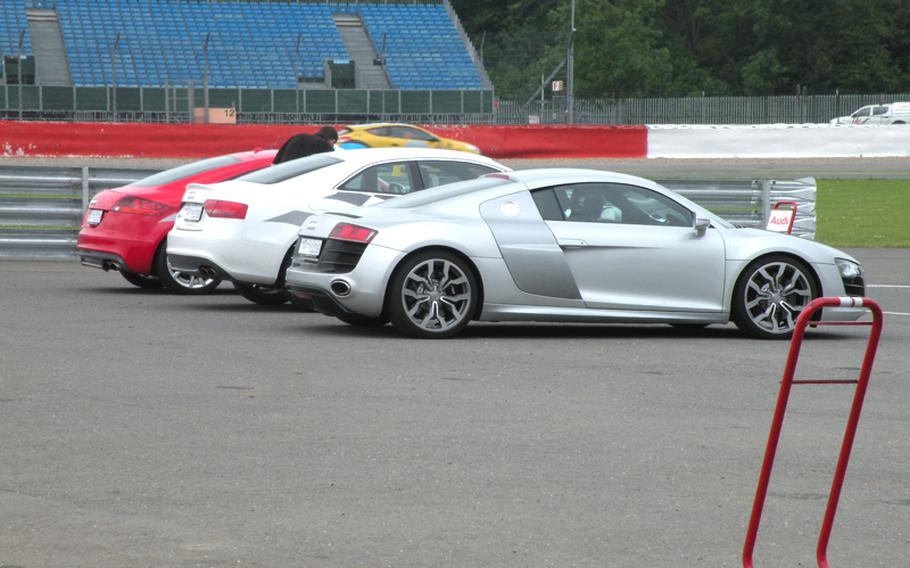 An Audi R8, and two other vehicles wait for passengers to take them around the track at during one of Silverstone Circuit's driving experiences. The longest straightaway on Silverstone's south loop, Hangar Straight, is the ideal place to test the car's 525 horsepower. (David Hodge/Stars and Stripes)

Many motorsport fans consider Ferrari cars to be racing legends for the way they have dominated racetracks since their inception more than 60 years ago.

I realized why as I was gripping the wheel of a 400-horsepower Ferrari 360 Modena at the Silverstone Circuit in rural England, waiting for my turn to negotiate the course&rsquo;s swooping apexes at the highest possible speeds.

Without any experience in four-wheeled-performance driving, I must admit I was a little overwhelmed. Part of it was because I was driving from the right side of the car, but another part was because of all the power at my disposal.

However, my time at the Ferrari&rsquo;s controls quickly became exciting enough to make me stomp the gas pedal and breeze through the F1-style paddle shift gearbox with unrelenting acceleration.

And when I glanced at the speedometer on Hangar Straight, the southern circuit&rsquo;s longest straightaway, I was astounded to see it read 145 mph. The car makes those speeds appear effortless, and by the time I realized how fast I was moving, it was time to set up for the next rapidly approaching corner.

Silverstone offers an array of driving experiences for all skill levels. Sports cars, single seat open-wheel track cars, rally cars and off-road vehicles are all available. So are some of the finest machines to originate in Britain, such as the Aston Martin V8 Vantage, Lotus Exige S and Caterham Seven.

Other exotic supercars available are a 500 horsepower Lamborghini Galardo and a 525-horsepower Audi R8. Or, if you prefer something with less gusto, try the KTM X-BOW, a radically designed two-seat sports car with 240 horsepower and no doors, roof or windshield.

Driving packages range in price from 39 pounds (about $60) to 704 pounds. The most expensive one, the Silverstone Challenge, devotes a full day to driving the entire fleet of vehicles.

The package I tested, the Ferrari Experience, included a 30-minute safety briefing, five laps around the 1.9-mile course in a 250-horsepower Renault Megane RS 250, four laps in the Ferrari and a one-lap ride with an experienced driver in the Megane. Normally, the package is 249 pounds, but Silverstone occasionally offers specials and I purchased it for half-price.

At each stage of the experience an instructor rides along and barks out commands along the way. At first his cries to change gear or set up for the next corner just added to the stress of high-speed driving, but I soon found myself in a groove and enjoyed the rest of the drive.

Still, the fast lap with the experienced driver &mdash; the final one with the Megane &mdash; made me realize how much more I could&rsquo;ve squeezed out of the cars. It served as enticement to go back and give it another shot some day.

So whether it&rsquo;s your dream to drive an exotic supercar or it&rsquo;s just a pesky mid-life crisis that is helping to fuel yet another slapdash decision, check out the cool rides at the Silverstone Circuit. Then take one out for a run around the track: It&rsquo;s another checkmark or two on our short life&rsquo;s lengthy to-do list.

Directions: From RAF Mildenhall and RAF Lakenheath, take A11 from the Five Ways roundabout toward Newmarket. Merge onto A14 toward Cambridge where the road will turn into the A428. As you reach the town of St. Neots, merge onto the A1 toward Bedford, and after 1&frac12; miles take A421 toward Milton Keynes. Merge onto the M1 toward Northampton and continue for about 18 miles. At junction 15a take the A43 toward Oxford M40. Follow the signs, the track will be on your left.

Times: The circuit isn&rsquo;t always open to the public, but it does host many activities and races throughout the year. To book one of the driving experiences, see the main page of its website, www.silverstone.co.uk, and click on "Experiences." Information is also available by calling 08443-728-270.

Costs: Costs for driving experiences vary depending on the package, but for most of them the cost is 99 pounds or 250 pounds. Silverstone sometimes offers discounts of up to 50 percent on selected experiences, so keep a lookout for bargains.

Food: There is a coffee shop with snacks available and a cafe within the track.

Information: Recent renovations have made the track Britain&rsquo;s home for premier class racing. Moto GP, Formula 1, World Superbike, 24-hour Le Mans series endurance races, British Superbike have all competed there or scheduled for 2011. Most everything you could want to know about Silverstone and its events are available at www.silverstone.co.uk.